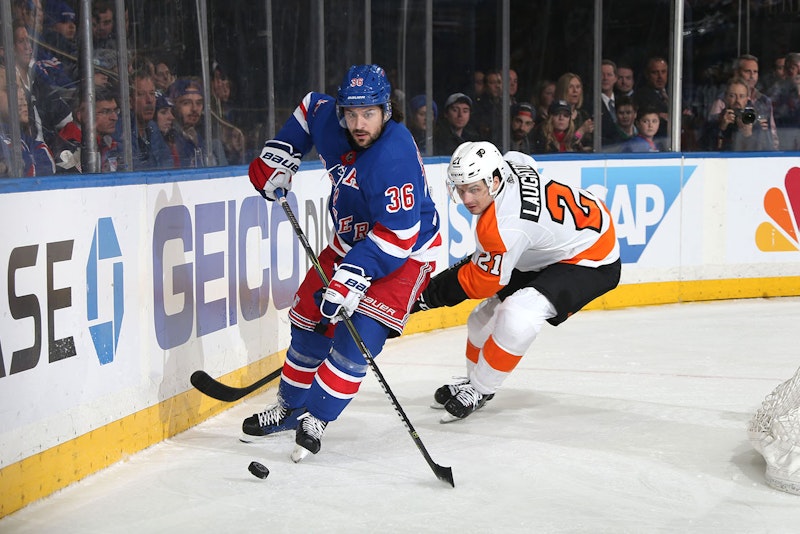 As Olympic hockey reaches its distant denouement in Gangneung, it’s only appropriate the New York Rangers fold up their tent on a lost NHL season. Before doing so, however, the Blueshirts pulled a bait-and-switch on their fans. Sunday’s matinee against the Flyers at the Garden featured a first period nostalgia pantomime. Three hockey fights, the first one just 15 seconds into the game, and six goals tallied in the first period. It was a throwback to old school hockey that no doubt titillated the dudes wearing Nick Fotiu jerseys in the stands. But, as expected, the second and third periods were back to the humdrum as netminder Hendrik Lundqvist looked more ordinary with each passing minute.

Philadelphia notched unspectacular goals from unlikely players to dominate 7-4, sending the road support happily toward their southbound trains. Flyers fans are still milking the Super Bowl victory, wearing plenty of green Eagles gear, which certainly clashes with the bad British ketchup orange that has marked Philadelphia professional hockey jerseys since their arrival in the late 1960s.

Perhaps the noon start time didn’t help. Always a full house at the Garden, the crowd was more groggy than usual. If you arrive 40 minutes before the puck drop, the Hammond organ player Ray Castoldi does a few songs with the room darkened. He was midway through “Rocket Man” when my daughter and I entered the arena bowl. Given the Rangers’ losing streak and fall from playoff grace, his version of “50 Ways to Leave Your Lover” was absolutely funereal. The Rangers still seemed to be suffering from the oddball “we’re rebuilding” announcement by the front office a few weeks ago. They won a few games in bold fashion after that proclamation, but then the losing began anew with minimal scoring and more Lundqvist ham and egging. The NHL trade deadline looms and the suitcases are in the mud room for several Rangers stalwarts, including the largely disappointing Rick Nash.

The loss to Philly meant 19 games remained on the slate and the Rangers would probably have to win 15 of them to get back into contention in a crowded scene for the Eastern Conference wild cards. I’ve admittedly written off the Rangers prematurely in the past and I turned to New York Post columnist Larry Brooks, the last hockey writer left standing in the New York market, to pen the team’s obit in Monday’s paper. Instead, Brooks hedged and suffered a baffling headline on his column (“Current issues are what doomed Blueshirts’ year”) as he looked ahead to the Rangers getting a better position in the next NHL draft. The Flyers were responsible for keeping the Rangers out of the playoffs back in 2010 when their shootout win in the final regular season game. Sunday’s matinee, however, is not the final nail in the coffin. More of those are on the way perhaps as soon as Thursday night when the ‘Gers travel to Montreal. Soon the NCAA conference basketball tourneys will take over the Garden and the Blueshirts will fade into sports oblivion much like their NBA brethren Knickerbockers.

I haven’t frequented MSG since the late-1990s when I had a partial ticket plan for Rangers games in order to witness Wayne Gretzky at work. Sunday’s visit proved little has changed in terms of the horrible concessions experience and general ineptitude of every single employee in the building. It’s the NYC Board of Ed of arena sports. Ushers are aggressive and disinterested at the same time, the upgraded concession stands look great and offer high-end fare, but there’s always a catch. They’re always out of something important, or they send you to another area to get the bun for your burger. Sunday’s disaster was closed beer taps at 90 percent of the 100-level concession areas. They funneled the thirsty hockey crowd into LaGuardia style lines at one singular “pub” with slow credit card machines that required 50 touchscreen keystrokes to land the plane. Two burrito bowls were stumbled through for myself and my daughter, with the inept cashier only ringing us up for one. Score!

Nothing kills the fan vibe worse than this type of botched service at extremely high prices. Granted, Rangers games have become increasingly corporate in terms of spectators through the years, but when the team underperforms the gloom is magnified in the Garden hallways. Word of mouth can still kill your walk-up sales, in other words.

I’d stopped at Paragon Sporting Goods on Union Square the day before, and down in the hockey gear section, a Norwegian family had asked the clerk about the Rangers. Probably an Islanders fan, the nerdy kid unleashed a diatribe about how bad the Rangers are. He made them seem like the 1973 California Golden Seals for crying out loud. “Worthless” and “useless” were used as he talked the Scandinavian clan out of attending Sunday’s game. Perhaps blinded by their pile of Olympic gold, the Norwegians quickly vacated the Paragon hockey department somewhat shell-shocked but apparently determined to see some NHL action.

It was fun to see Cody McLeod in his fourth fight in just nine games with the Rangers. There was energy in the room oh so briefly after Pavel Buchnevich duked it out with Shayne Gotisbehere. And why shouldn’t Tony DeAngelo go after Ranger-killer Wayne Simmonds? For a brief few minutes, with the first period ending at 3-3, New York had a fighting chance against their playoff-bound rivals. I’d forgotten that the Rangers on-ice fights are replayed in gory slow-motion detail on the gondola scoreboard video screen. Watching on TV the fisticuffs seem silly and staged and have been less frequent, in my opinion. But the live hockey experience is Ancient Rome. It includes the somewhat seedy element of watching a street fight from a padded seat with your favorite beverage in hand.

By the third period the New York Public Library had taken over the World’s Most Famous Arena at 34th St. and 7th Ave. Pins dropped and were heard. The mid-day service at nearby St. John The Baptist church was spilling in through the MSG doors. I believe I caught a few strains of “Christ Be Our Light” as Ranger Kevin Hayes was ejected from yet another face-off circle. Booing was minimal, which was surprising given this team was boastful and brimming with confidence leading up to a rousing victory over Buffalo at Citi Field in the outdoor “Winter Classic.” Perhaps that win sparked some type of Queens jinx, having played out there in that airport adjunct facility where Mets fans roam, toting their Islanders support proudly on snot-encrusted sleeves?

On the Sunday before the Presidents’ Day holiday, general fan rhythm at the Garden was way off, with the self-whistled “Potvin Sucks” chant being botched at least three times I heard it attempted. Dancing Larry is no more. A final look around: seats were filled with families and couples on dates. Every third person had the hunched-forward neck posture of humans studying not the action on the ice, but instead their cell phone screens.