Dramatic win over Ravens comes at a perilous cost. 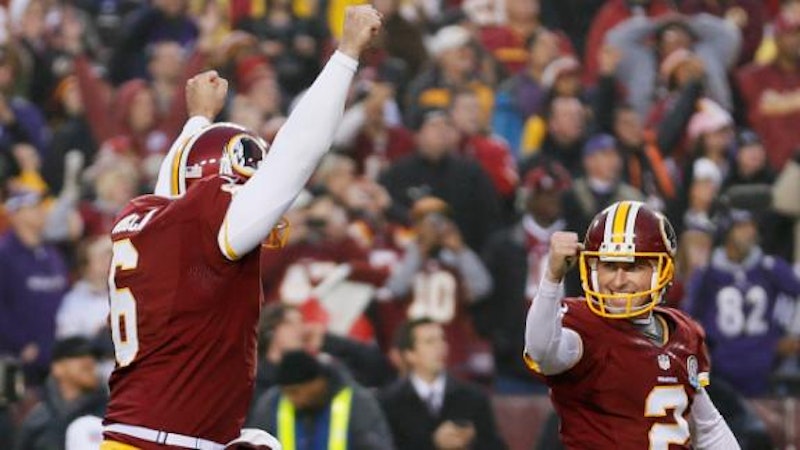 There have been more important games in Redskins history, but Washington’s win over the Ravens on Sunday was the biggest comeback in the most important game this franchise has faced in the last decade.

Flash back four weeks ago. The Redskins were 3-6 coming off a loss to a bad Carolina team. The head coach publicly stated the team was evaluating their players for next season. But instead of folding, the Redskins have won four games in a row and against increasingly difficult competition. First they beat a bad Eagles team, then Dallas on the road in a Thanksgiving Day game, next the defending Super Bowl champs, and now a 9-3 Ravens team, one of the best that the stronger conference has to offer.

The Redskins now sit a game out of the division lead and a game out of a Wild Card spot, but all that wouldn’t mean anything had Ravens defensive tackle Haloti Ngata hit Redskins quarterback Robert Griffin’s right knee just a little bit harder. The hit came with three minutes left in the fourth quarter and the Redskins driving, down eight points. To replicate the hit, sit down, put your legs out in front of you, put a 340 pound defensive tackle on your right thigh, then have him grab your leg and pull it up over his shoulder. Then go out and complete two passes to move your team from your 47 yard line to the other team’s 16.

The power of Griffin was never more apparent than watching him hobble down the field after completing those passes. And even though the Redskins won the game, achieving their first winning record in the month of December in seven years, it is a pyrrhic victory if Griffin misses the rest of the season. And it’s an outright disaster if his knee suffers permanent damage. Sources say that Griffin’s MRI showed his knee was just sprained, but a sprain still means the ligament was damaged. What’s more, it’s the same knee in which Griffin tore the ACL back in his sophomore season at Baylor.

The episode speaks to two things: first, Griffin’s will as a person and, more germane to this discussion, his vast abilities as a player; second, the dangers of being a running quarterback in the NFL. Griffin was the second player selected because he has a strong and accurate arm, but also because he possesses impressive speed. At any given point Griffin may be the fastest man on the football field, and that is saying something as NFL cornerbacks and wide receivers are nothing if not silly fast. There are few things that make a player lose his speed more quickly than knee injuries. Griffin recovered from a torn ACL before, and he could once more. But continued injuries take their toll on physical abilities. Griffin has the skills to be a pocket passer, but what sets him apart from other quarterbacks is his speed and ability to run for first downs and, on occasion, more. If that speed disappears he’s a diminished player.

This is the second time Griffin has been seriously hurt this season. The Redskins, who gave up three first round draft picks for the right to draft Griffin, simply must do a better job of protecting their franchise player. It’s imperative that Griffin learns the dangers of running and how best to minimize them. In fairness to Griffin, he was sliding when Ngata hit his leg, but clearly he didn’t slide soon enough.

Players are conditioned to put the team ahead of their own well-being. It’s admirable, even inspiring, to not just play injured but to demand to do so as Griffin did Sunday. Yet, both the Redskins and Griffin need to adopt a live-to-fight-another-day attitude sometimes. Throwing your body across the first down market and damn the consequences looks great on SportsCenter and it’ll get the home fans riled up but quick, but when your knee bends around a defensive tackle’s back in a fashion better befitting pasta maybe it’s time to reevaluate your strategies.

So the Redskins won because of the Herculean efforts of Robert Griffin with assists to kicker Kai Forbath and back-up quarterback Kirk Cousins. In a season in which they counted themselves out they’re in the thick of the playoff chase. They now have a winning record and meaningful games remaining on the schedule. But winning those games and maintaining that record are going to be tough if Griffin misses time. More to the point, winning the Super Bowl at some point with Griffin at the helm will be impossible if he’s watching from the sideline.