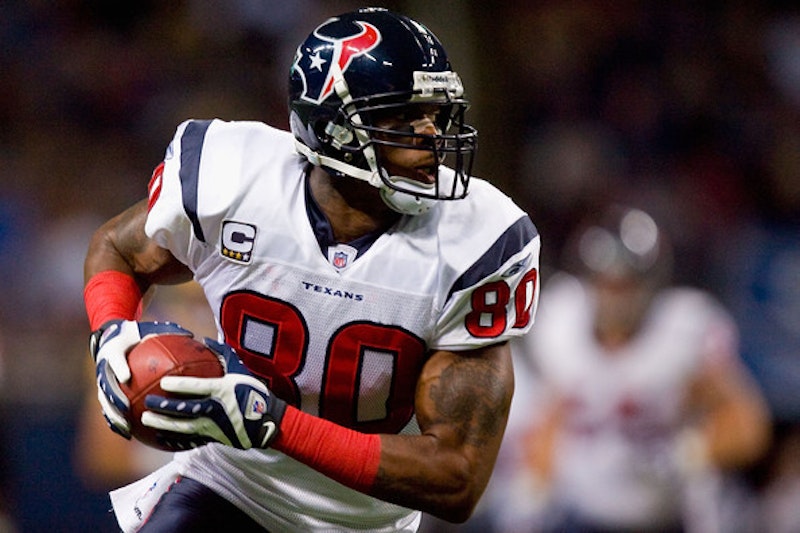 The first few days of NFL free agency were a whirlwind. The Super Bowl Champion Patriots lost a pair of defensive stalwarts. The Bills and Jets were active on the trade and free agent markets but are still unsettled at the quarterback position. The Ravens lost a pair of longtime fan favorites, including Baltimore’s reigning crab cheese curl kingpin. Not to be outdone, Chip Kelly and the Eagles traded a star running back to focus on improving on defense and then went all in for a pair of backs and a quarterback with shady medical histories. A lot of money changed hands but the balance of power hadn’t shifted. The comings and goings in the NFL over the past week could have huge implications for fantasy teams. Let’s focus on the biggest fantasy winners to this point in free agency.

No player improved his lot in life as much as Andre Johnson. When the Texans cut Johnson and made the long-time franchise icon a free agent, he bolted for Indianapolis. Johnson becomes T.Y. Hilton’s running mate and the replacement for Reggie Wayne recently released WR, and fellow Miami Hurricane. Johnson goes from having some combination of the unproven Ryan Mallett and pedestrian Brian Hoyer tossing passes his way to playing with one of the league’s best QB’s in Andrew Luck. The Colts, who also signed Frank Gore, will be a chic Super Bowl pick despite doing nothing thus far to address a subpar run defense. Scoring points wasn’t Indy’s problem in 2014 and with Johnson in town it won’t be a problem in 2015 either.

The running back dominoes started to fall last week when the Eagles pulled a shocking trade that sent LeSean McCoy to Buffalo. The move out of Chip Kelly’s wide-open offense to the rudderless Bills is a serious downgrade for McCoy’s fantasy value. McCoy’s exit left an opening in Philly that was filled by the signings of DeMarcus Murray and Ryan Mathews. The two-headed RB combo will be a drain on both players’ fantasy values next season. The Cowboys signed former Raider Darren McFadden to replace Murray. McFadden has battled injuries for much of his career but he is still just 27 and played 16 games in 2014. With the move to Dallas McFadden will have the luxury of playing behind one of the league’s premier offensive lines. McFadden, once left for dead in fantasy circles, will be worth a flier in 2015. Latavius Murray stands to benefit from McFadden’s move to Texas. The rookie, who had taken McFadden’s starting role late in the season before suffering an injury, figures to start at tailback for the Raiders this year. Murray averaged 5.2 yards per carry on 82 attempts in 2014.

It wasn’t long ago that Johnny Manziel, Josh Gordon and Jordan Cameron were hyped as the three-headed monster that would pull the Cleveland Browns from the depths of pro football despair. Now Manziel is in rehab, Gordon is suspended for the entire 2015 season and Cameron is a Miami Dolphin. The 26-year-old tight end moves from a team with a comical quarterback history to a fairly stable situation in Miami. Dolphins QB Ryan Tannehill has progressed in each of his three seasons in the league. With Cameron and Kenny Stills, acquired via trade from New Orleans, Tannehill may have the necessary weapons to make the jump from potential to playoffs. Cameron has suffered three concussions over the last three seasons but his 80-catch, seven-touchdown performance in 2013 no doubt has the Dolphins and their fans excited about his prospects for 2015.

While Johnson, Cameron, Murray and McFadden all added fantasy value over the past week, Jeremy Maclin and Jimmy Graham saw their value dip. Maclin left the Eagles for big money to play the dink to Alex Smith’s dunk. The Chiefs’ popgun offense was in desperate need of a deep threat after somehow managing to go the entire 2014 season without completing a single touchdown pass to a wide receiver. If any Maclin owners are feeling good about his move to KC they should go talk to a few Dwayne Bowe owners. Jimmy Graham’s trade to Seattle is probably already causing sleepless nights for NFC West defensive coordinators and fantasy owners alike. Graham is one of the best talents in the league but he will be hard pressed to repeat his otherworldly fantasy stats after being traded from the pass-happy Saints to the Seahawks’ run heavy offense.