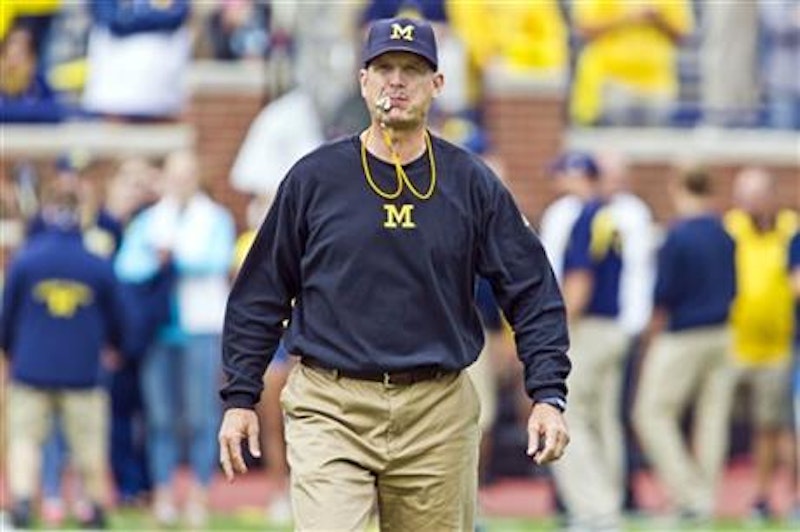 "I don’t take vacations. I don’t get sick. I don’t observe major holidays. I’m a jackhammer." This is how football coach Jim Harbaugh described his style when he was coaching at Stanford University. He led The Cardinal to a 12-1 record and an Orange Bowl win back in 2010, and when the 49ers lured him to San Francisco, Harbaugh took the previously hapless Niners to the Super Bowl in his second season. General Manager Trent Baalke probably felt like he was often jackhammered by the one-time NFL quarterback-turned-coach in their working relationship, as Harbaugh doesn't believe in social niceties. The team released him after the 2014 season. With Harbaugh, you take the good with the bad, and Baalke couldn't deal with all the bad, despite all the wins.

Now he’s back coaching for his alma mater, University of Michigan. After finishing his first season as head coach with a 10-3 record, he's pulling out all the stops, as only Harbaugh can do it. The goal is to make the Wolverines into a national powerhouse. Coaching the college game, unlike the NFL, is all about recruiting, and it's a cutthroat business. SEC teams win so many football games because they attract the best players, sometimes by skirting NCAA rules with dubious practices. "Harbs" is fixing to get the best players for Ann Arbor instead of Tuscaloosa now, and it’ll be fun watching him do this, because this coach is never boring.

Being an "in your face" sort, Harbaugh doesn't care who he annoys. He certainly doesn't believe in such elevated concepts as the "community of college coaches." This year he took his team down to Florida to train during their spring break. The workaholic who doesn't observe major holidays doesn't observe the spring break tradition for his players either. Nor does the concept of "turf" mean much to him, as he set up camp just a couple hours south of Gainesville, which displeased the University of Florida. The Gators don't take kindly to carpetbagging outsiders trying to poach their recruits. Surely the filthy-rich SEC senses a predator’s now in their midst. NCAA president Mark Emmert said of Harbaugh's Southern adventures, “There’s a difference between not being prohibited and not being OK," but Harbaugh isn’t the type to entertain such delicate distinctions.

Closer to home, Harbaugh also has his sights set on Michigan arch-rival Ohio State, which won a national title in 2015. Buckeyes' Athletic Director Gene Smith, commenting on Michigan's Florida road trip, said his school might do the same if they were "jump-starting" their program, rather than being established winners. Harbaugh tweeted this reply to Smith's dig with a reference to Ohio State's 2010 scandal under former coach Jim Tressel: "Good to see Director Smith being relevant again after the tattoo fiasco. Welcome back!" Smith ended up apologizing the next day. Much like Donald Trump, Harbaugh never leaves a slight unaddressed. Just ask former Detroit Lion Coach Jim Schwartz. Harbaugh patted him on the back so hard after a 2011 game where he felt Schwartz disrespected him that he tried to rumble with the 49ers coach on the field.

New York’s Daily News reported Harbaugh visited kicker Quinn Nordin on the first day permitted by NCAA rules. Nordin said he showed up at 12:01 a.m. and said, "We can watch a movie, see how well we gel." Harbaugh said he'd sleep over, only asking for a 6-foot-3 piece of carpet to stretch out on.

Harbaugh is no normal coach. He's not even a normal person. He asked his wife out nine times before she'd date him, because he knew right away she was a "winner." Harbs is often described as "crazy." Take a look at him when he gets upset on the sideline during a game, and the veins in his neck start bulging out. When he started coaching my team, the 49ers, I quickly realized he was technically an asshole, but I saw that as a plus. He was "our asshole" who wanted to win so badly that behaving like a halfway decent human being didn't even occur to him.