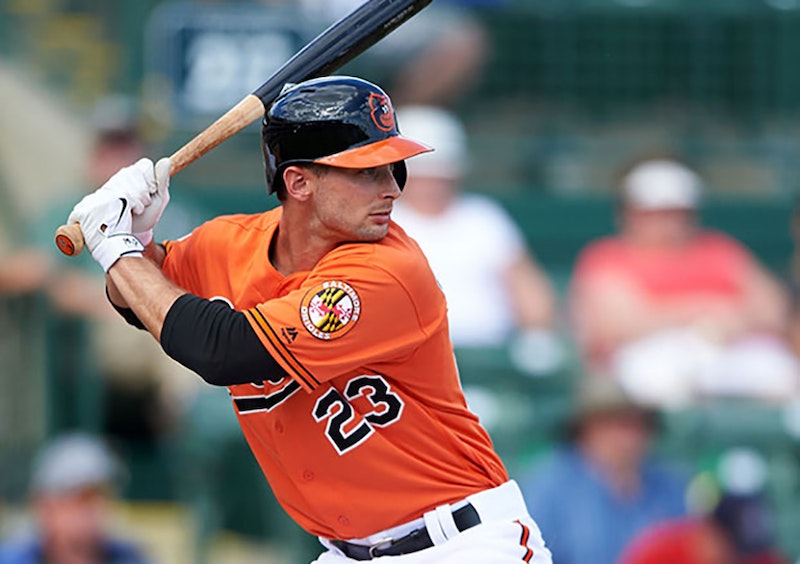 The Orioles, who’ve won their first seven games of the season, have outperformed expectations and Joey Rickard is leading the charge. The O’s routinely select players in baseball’s Rule 5 Draft each December. Baltimore’s made a Rule 5 pick in each of the five drafts since Dan Duquette took control of the front office. Duquette gladly handed over the $50,000 fee to bring the likes of Ryan Flaherty, T.J. McFarland and Jason Garcia to Baltimore. When Duquette plucked Rickard from the Tampa Bay farm system last December it was at least plausible that the young outfielder would be Baltimore’s most significant offseason addition.

But with Hyun Soo Kim imported from Korea and swirling Dexter Fowler rumors, Rickard was an early March after-thought. He entered Spring Training with a chance to make the Opening Day roster as a pinch runner and defensive replacement. Now the 24-year-old is the leadoff hitter for the 7-0 Orioles. A scorching spring earned Rickard the full-time left field job in Baltimore. His advancement pushed Nolan Reimold and Kim to the O’s bench. Rickard opened the season batting ninth, but a fast start with the bat and a nagging injury to Adam Jones, pushed him to the top of the lineup.

Manny Machado hit leadoff for the Orioles for most of last season. Baltimore chased free-agent Fowler during the winter in an effort to push Machado lower in the order. Fowler’s return to Chicago looked like it would earn Machado another year atop Buck Showalter’s lineup. Rickard’s hot hitting has allowed Showalter to move Machado to the number two spot in the lineup. When Jones returns, Machado could settle into the third spot in the order ahead of Chris Davis and Mark Trumbo. The speed of Rickard and Jones at the top of the order should create more RBI opportunities for Machado.

Just two years ago Rickard logged a disappointing .634 OPS at Double-A. He improved last season and ended up posting a .874 OPS at three stops in the Rays’ minor league system. Rickard’s development continued during winter ball in the Dominican Winter League. He drew the attention of O’s scouts in the Dominican by slamming six home runs in 50 games and posting a solid on base percentage. Rickard’s greatest tool as a pro, his ability to get on base, is usually the O’s biggest weakness.

Baltimore will ride Rickard’s fast start for as long as possible. The young outfielder is quickly becoming fan favorite, with chants of “Joey, Joey” ringing through Camden Yards. Even if Rickard never gets another hit in orange and black he’s already been worth the Orioles’ $50,000 investment.