MLB soothsaying makes April Fools of us all. 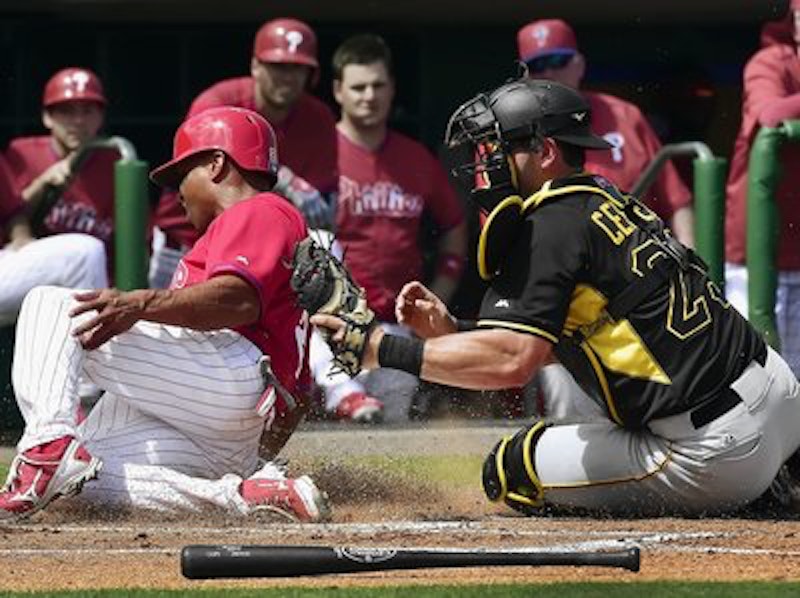 The road to Bright House Field in Clearwater, Fla., the Spring Training home of the Philadelphia Phillies, is a traffic-choked nightmare that includes the original Hooters, the bayside campus of Clearwater Christian College and if you keep going west eventually you fall in the shadow of the Church of Scientology “spiritual headquarters” in the old Fort Harrison hotel—the same joint where Keith Richards woke up in the middle of the night in 1965 and penned the guitar riff that would drive the Stones hit “Satisfaction.”

The ballpark, which emerges from an underpass of another busy highway heading north to Tarpon Springs, is surrounded by acres of Godzilla bait. These are the power station lines and towers that always confound the Japanese sea monster in films. Walking from the distant parking at Bright House is a radiation bake from above that will augment any sunburn already present on white, northern skin eager to take in March baseball.

The Phillies and Pirates duked it out within the confines, putting up 27 runs between them with the wind blowing out and skinny middle infield guys like Pedro Florimon going deep. It was during the beer-soaked, hazy late innings that a bat crack so loud and defiant made me bolt upright in my seat, and take heed of a towering home run over the centerfield batter’s eye. It was Ryan Howard, Philadelphia’s current scapegoat power-hitting first baseman who’s still booed after horrendous production last season. I still admire his effort resulting in his Achilles tear to end the 2011 NLDS as the last batter to go down against the wretched Cardinals. This March, Ryan looked refreshed, like the old-young Ryan when he hauled home the NL MVP trophy a decade ago. His blast to center was a grand slam and ignited the 9000 or so on hand. Look for a comeback year from the St. Louis native who had to “win back his job” during this preseason.

The Pirates had a five-run lead prior to the arrival of Wilfredo Boscan from an anemic bullpen Clint Hurdle brought up from home camp in Bradenton. Why do you sit in the glorious sun and watch a pitcher like Boscan march into the game and blow a five-run lead before another four peanuts can be cracked and consumed? Because you can and it’s Spring Training and nobody is counting anything. The ballgirls at Bright House—named for the horrendous cable company formerly known locally as Time-Warner—are uniformed Hooters girls who receive too much attention from pervy Phillies fan dads. Philly scrub outfielder Tyler Goeddel helped Bucco hopeful Matt Joyce to a home run by slapping his warning track drive over the wall with his misplaced fielding glove.

It was in the post-game traffic mire along the Courtney Campbell Causeway that I decided my penance for ignoring the Easter holiday with spring baseball would be to write a 2016 MLB preview, among the most hated pre-April tropes of any kind. Predicting baseball turns any pundit into Dustin Hoffman tending to his vegetable garden on Devil’s Island in the final scenes of Papillon. So here is my version of jumping off the cliff with a bag of coconuts as my raft, hoping to live the rest of the baseball season as a free man:

NL East aka the Soup Kitchen: The Mets are certainly bound to prevail because no other volunteers have stepped forward. The Washington Nationals are act one of Damn Yankees and plagued by partisan politics involving Gatorade endorsements and manly dugout challenges. Look for the aforementioned Phillies to make a good run at second place this season. The rest is Giancarlo Stanton posing in front of the Clevelander in South Beach.

NL Central aka the Platinum Lounge: Last year’s elite division has a new pre-jinxed club sitting atop the pile as of this writing. Las Vegas has bestowed the Chicago Cubs with the “favorite” status to win the 2016 World Series which puts great pressure on mouthy Joe Maddon and his young charges on the Northside. Look for them to wilt under the pressure, especially after Anthony Rizzo finally has his strike-zone dwelling wrist shattered on Mother’s Day weekend. Cardinals and Pirates will duke it out for supremacy with late-season dramas unfolding.

NL West aka Victims of El Nino: The sickening franchise that is the Arizona Diamondbacks thinks it has shed its social anxiety disorder by adding a high-maintenance ace suffering the same ailment. Fat chance. It’s the San Francisco Giants’ turn to win the west, having of course to fight off the Los Angeles Dodgers in the parking lot after the game. It will be a Matt Cain mutiny that will probably carry them all the way to the World Series.

As for the American League, well I will cop-out DH style and just bring in some random, overwrought underdog picks with good bat speed but a high strike out ratio.

AL East: Boston and the Yankees will survive and advance while the Toronto Blue Jays pull the Canadian version of the Washington Nationals and collapse under their own hype.

AL Central: Cleveland licks its football wounds with a brilliant season from the Tribe who give the letdown Royals a run for their middle-American money.

AL West: Robinson Cano awakens and helps Seattle stun the Houston Astros, who will be sandbagged by injuries.