Live from a Harrisburg Senators game. 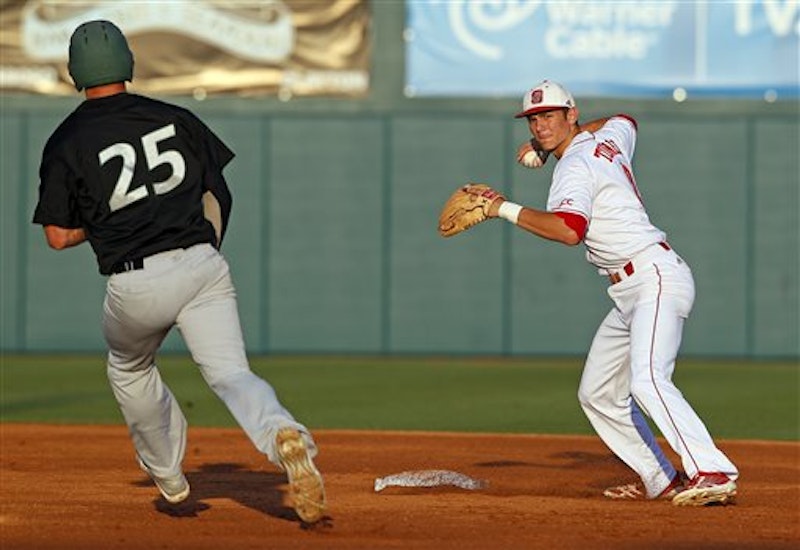 My first memory associated with the Harrisburg Senators dates back to high school when I’d scan the Sunday edition of The Baltimore Sun for minor league stats in the kitchen. Back then, the Sunday paper was one of the few reliable places to get minor league stats. Expos’ farmhands Rondell White and Cliff Floyd were starring for the Senators and making a mockery of Eastern League pitchers. Floyd slammed 26 homers in 101 games and White slashed 10 triples and posted a .371 on base percentage for the 1993 Senators.

Poster-sized baseball cards of White, Floyd, Brandon Phillips, Vlad Guerrero and other former Senators who went on to big league stardom line the concourse at Harrisburg’s MetroBank Park. This jewel of a ballpark sits just across the river from Pennsylvania’s Capitol on a sliver of land in the middle of the Susquehanna. MetroBank Park, the anchor tenant of the entertainment complex dubbed City Island, is a major improvement on the metal bleacher lined diamond that Floyd and company called home. The revamped ballpark has all the amenities 21st century baseball fans have come to expect, including an open concourse, team store, and plenty of chilled microbrews.

I attended a Senators vs. the Binghamton Met game as a credentialed media member last week. My first press box experience wasn’t quite what I expected. Nearly June, the first pitch temperature was 56 degrees. Shivering through the early innings, my jaunt up Interstate 83 no longer seemed like such a great idea. I made a trip to the men’s room to run my hands under hot water until I regained the feeling in my fingertips.

The men’s room had a poster on the wall advertising an upcoming game featuring alternative uniforms that would portray the Senators as the Harrisburg Mayflies. The team is apparently pondering a name change, or at least the prospect of additional apparel sales associated with that. The team store is full of “Mayflies” merchandise that bears a resemblance to logos of the Charlotte Hornets and Delaware State University. The store offered a variety of merchandise and another chance to warm my hands. In addition to the Senators and Mayflies apparel, there were stuffed rally monkeys and Rascals (Rascal is the team’s multi-colored, asexual blob of a mascot) and lots of Bryce Harper paraphernalia.

In addition to Rascal roaming the concourse, MetroBank Park also features a trio of interns in oversized monkey costumes walking around taking selfies with people. The multiple mascots, logos, and alternative name gave the feeling of a franchise in transition. It’s like the marketing people had done as much as possible with the traditional name “Senators” and wanted a chance to work on something new. It struck me as disjointed.

Perhaps my attention drifted to the surroundings because the on-field product wasn’t too exciting. The past few times I’d been to Harrisburg there was a buzz around the team as Stephen Strasburg, Bryce Harper and Anthony Rendon made their way through the Nationals’ farm system. Last week’s was different. The Nats’ best prospect, Lucas Giolito, is currently pitching for Class-A Potomac. Then there’s Trea Turner and he’s not even part of the organization yet. Turner’s inclusion as the player to be named later in the offseason three-team trade that sent Steven Souza to Tampa Bay is hardly a secret. The Padres’ first round pick last June can’t be officially traded to Washington until the conclusion of this year’s June draft. Turner is currently stuck in baseball purgatory as the star player for San Antonio of the Texas League, but his production hasn’t dipped amid the uncertainty surrounding his future.

The 21-year-old shortstop has 16 extra base hits, nine steals, and a .945 OPS for the San Antonio Missions. He’s expected to join Harrisburg whenever his trade can be made official. Until then he’s left waiting for the call and Harrisburg fans are left waiting for Trea Turner.

The Senators, currently under .500, could see a second-half resurgence. Turner and Giolito are almost certain to make their way to Harrisburg at some point this summer. The Nationals recently recalled shortstop Wilmer Difo from the Senators, but he’s likely to return in the near future to form a promising keystone combo with Turner. Harrisburg fans could also be treated to the sight of right-hander Reynaldo Lopez, another top young hurler. Joe Ross, brother of Padres’ starter Tyson Ross, looked like a throw-in as part of the Turner trade but he’s been the Senators best player to date. A team featuring Ross, Giolito, Lopez, Turner and Difo will be enough to get me back out to the ballpark regardless of how many team names and logos the marketing department forces them to wear.