Meltdown on the Tennis Court

Is the game still fun for me? 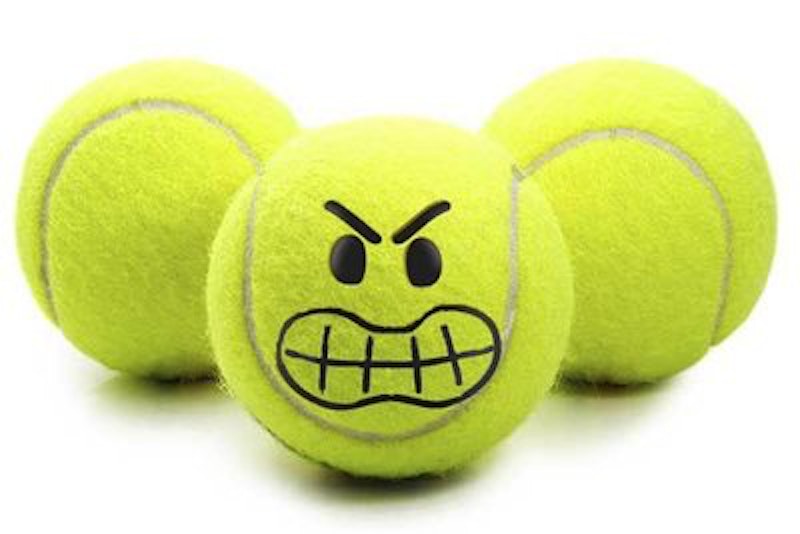 Not long ago, I had an "incident" on the tennis court that illustrated why I’m easing towards golf more these days. My opponent was driving me crazy. To begin with, he was a "dink baller," meaning that the guy rarely hits a solid ball to the back part of the court, preferring to hit it short and at an angle. The result is that I rarely got to hit a solid shot against him. This is a type of game lesser players with no real strong strokes employ, and I don't enjoy it.

Already annoyed, he twisted the knife deeper by not having an extra tennis ball in his pocket while serving. This meant that whenever he missed his first serve, which was often, he had to walk to the sideline, pick up another ball, walk back to the service line and hit his second serve. In the hundreds and hundreds of sets of tennis I’ve played, never once have I seen this done. I don't know if there’s an actual rule forbidding this, but it’s extremely rude. I went into a slow boil.

Finally, I asked why he was doing this. He replied that he didn't like the "feel" of the ball in his pocket as he served. Could I really be hearing this? Did he think he was so sensitive that he couldn’t endure the common practice of putting the extra ball in his pocket? I rolled my eyes but didn't protest further. Then he returned to his rinky-dink "finesse" game, and I went off the rails a few points later. Incensed by missing an easy shot on one of his "softballs," I decided rather than returning to the service line, I’d hit the ball way, way out of the court—about 80 yards out into the adjoining field. It felt good. He started jawing at me and we exchanged some "pleasantries" before I grabbed my bag and stalked off the court.

I'm no John McEnroe when it comes to tennis court temper tantrums, so I surprised myself with this explosion. I have no "history of violence" on the courts—no broken rackets, and not too much foul language. My previous incidents over the years, a total of three, involved merely walking off the court when my opponent repeatedly questioned my line calls. Yes, there was the occasional smattering of trash talk in anger or frustration, but nothing too serious.

Tennis can bring out the worst in people. It's two individuals going at each other toe to toe, and it's easy to blame the other guy sometimes when things aren't going your way. In a heated match you can actually feel hatred towards your opponent, like a baseball pitcher might feel towards a certain batter who homers on him often.

Tennis players can be prickly sorts. Often their egos get involved, which is never a plus. A certain percentage of them will take it personally when someone they consider an inferior player is beating them. I’ve even seen fistfights on the court when tempers flair. Another particularly annoying type will constantly remind you of his USTA rating. Hey, who cares if you're a 4.0? Just beat me then and prove it. I've also had to deal with a guy who’d have 15-minute phone conversations in the middle of a set. Not one word of apology either.

Then you have the cheaters. They have to win, no matter what it takes. I played tennis with a guy for a whole summer and he almost always beat me. The thing is, he foot-faulted on every single serve he hit. I didn't bother calling it, realizing he was the type who’d lose it, and then the match would be over. I wanted the exercise more than the win. The score wouldn't be in the local newspaper like it was when I played in high school, so what did I care?

I get tired of being reliant on my opponent for a good experience on the tennis court. I took up the game five years ago after contracting a brutally painful case of plantar fasciitis, but even though I've recovered, I still find myself gravitating more towards golf. There are no conflicts on the golf course. In fact, in all the rounds of golf I’ve played, and with all of the different opponents—many of whom I’d just met—I've never experienced an unpleasant encounter with one of them. We're playing against ourselves, not against each other. If you beat me I usually don't care that much, unlike tennis, because I have a goal in mind and if I hit it I'm happy. If you hit your ball a little better, I'm happy for you. Golf is not a zero-sum game.

As a golfer, I have no need to find a partner who is around my skill level and then arrange a time when we are both free. I just take my clubs to the course and either play alone or get added to another twosome or threesome—no arrangements necessary. No dink ballers to deal with—no egotists, cheaters or phone-gabbers either. Tennis is still my greatest love, as a sport to play, but golf is looking like a more compatible partner right now.