I have to admire Bill Daly. 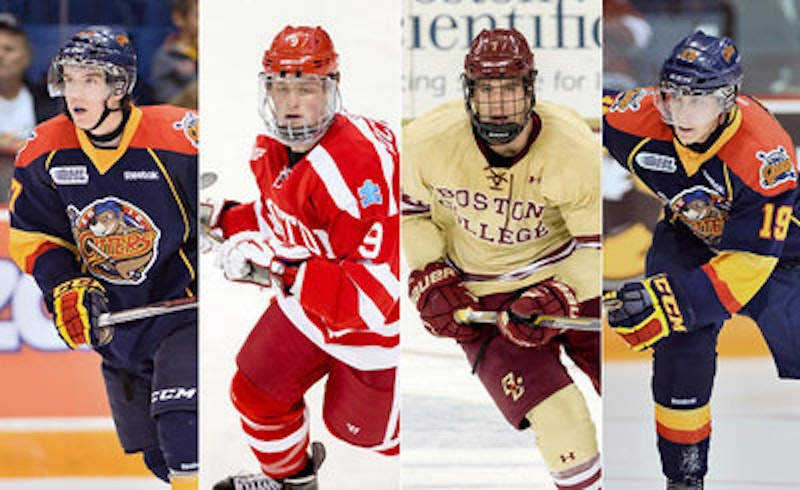 In retrospect, I have to admire Bill Daly. Which is not something I say very often. But I’d watched the Deputy Commissioner of the NHL deliver a piece of news to a Canada-wide audience, and do it without flinching even though it was likely the thing he least wanted to say.

This is how it played out: It’s the evening of the NHL’s Draft Lottery. Each of the 14 NHL teams that missed the playoffs now has a chance at winning the right to the first overall draft pick. The worst team in the league standings, the Buffalo Sabres, has a 20 per cent chance at the top spot; the next worst, the Arizona Coyotes, has a 13.5 per cent chance; and so on down to the Boston Bruins, the best of the non-playoff clubs, which has one chance in a hundred at drafting first overall. The winner is to be determined in a locked room by drawing ping-pong balls from a lottery machine in a process overseen by NHL Commissioner Gary Bettman, after which Daly will announce the winner during the Canadian Broadcasting Company’s venerable Hockey Night in Canada broadcast.

No communication is allowed with the outside world as the drawing takes place. When it’s over, a league employee emerges from the room and gives Daly 14 large, square envelopes, each holding a stiff card upon which is printed a team logo. Daly will reveal these logos one by one on camera, as a CBC host counts down the teams. Thirteen of the logos are printed on a white background. The logo of the winning team is printed on gold.

It’s a dramatic ceremony, and adding to it is the fact that the player likely to be the first overall pick this year is considered the best hockey prospect since Sidney Crosby. For weeks Hockey Night in Canada’s been showing clips of Connor McDavid of the Erie Otters slashing through opposing defences, blasting pucks into nets, or skating around entire teams. McDavid’s a jaw-dropping talent, and there’s genuine suspense over which team will end up with him. He’s the sort of player that can change the destiny of an entire franchise.

He, and rare players like him, are why there’s a draft lottery in the first place. For years teams simply drafted in reverse order from their regular-season finish, so that the worst teams got the highest picks. Except, of course, that meant teams who knew they weren’t making the playoffs had an incentive to lose. Especially when a spectacularly gifted young player was available in the draft, a generational talent like McDavid or, say, a Mario Lemieux. Many still suspect the management of the Pittsburgh Penguins threw some of their final games in the 1984 season, trading a useful defenseman for nothing and playing a minor-league goalie, to ensure they finished last and were able to draft Lemieux.

So the NHL brought in the draft lottery 11 years later. No system is perfect, and systems established by the NHL are less perfect than most, so they’ve tinkered with the formula a few times since. Dissatisfaction remains. The Edmonton Oilers, for example, are freakishly lucky at the lottery at the same time as they’ve been inept at most other aspects of hockey, which has caused some resentment among other teams. And then there’s the question of how useful the lottery is in years when there isn’t a single overwhelming talent in the draft. Often there are two or three or four players who could reasonably go first overall. Is the slight element of randomness at the top of the draft really relevant?

This year presents a different wrinkle: two players with spectacular gifts. McDavid’s always been the consensus choice for the first pick, but some have suggested that American Jack Eichel could challenge him. Eichel’s held to be a slightly less brilliant a prospect than McDavid, but better than the “average” first overall pick. So there are two standout talents in the draft, and as the season wound down it was fairly clear that a number of teams made trades and other personnel decision with an eye on finishing as poorly as possible. Why not? They’re guaranteed to get either McDavid or Eichel. So the Buffalo Sabres, who finished dead last, had their fans actually cheer when they lost a crucial game to the second-worst Arizona Coyotes.

Such is the background for this year’s lottery. There’s tension in 14 cities as the countdown begins, Daly before the camera with the 14 oversized envelopes on a stand in front of him. Will Boston, in the 14th spot as the night begins, beat the odds and win the lottery? You’d have to think the League wouldn’t mind seeing their next superstar in a major American media market, especially one with a long hockey history.

It’s not to be. Daly opens the first envelope, pauses, and announces: “The Boston Bruins retain the 14th position in the 2015 NHL draft.”

The next team is Los Angeles. How much would the league love to see McDavid there, following in Wayne Gretzky’s footsteps? The continent’s largest media market. And an excellent team that won the Stanley Cup the year before, as well as in 2012. So of course it doesn’t happen. “The Los Angeles Kings retain the 13th position.”

Dallas, then, at 12? Florida at 11? Colorado at 10? San Jose at nine? Columbus at eight? All of them either southern teams, relatively new NHL markets, or both. One of the hallmarks of Gary Bettman’s reign as Commissioner has been his determination to set NHL franchises firmly in place all across the United States, including cities like Dallas, Florida, and San Jose. Some markets, to put it mildly, are more successful than others. San Jose’s flourished, and Dallas has won a cup; but Florida’s struggled with low attendance, and Columbus has only made the playoffs twice in 15 years. Could McDavid help any of these teams?

Probably. But it’s not going to happen. One by one, with a slight nod here and a shrug there and an occasional tightening of his lips into something not quite a smile, Daly denies each of them. His performance is impressively neutral. Animated and yet hard to read.

Number seven on the list is the Philadelphia Flyers, a traditional hockey market and the rival of Sidney Crosby’s Pittsburgh Penguins. Hard to imagine the NHL being upset if McDavid ends up there. He doesn’t. “The Philadelphia Flyers retain their seventh selection in the 2015 NHL draft.”

And now the team in the fourth spot: the Toronto Maple Leafs. One of two Canadian franchises, along with the Montreal Canadiens, in the group of “original six” NHL teams who date from the Second World War. The Leafs haven’t won a Cup since 1967, but are the most profitable franchise in the NHL, with a huge and rabid fanbase. If McDavid goes to Toronto, the largest media and population center of English Canada, the NHL will be very, very happy. And pandemonium will ensue among Maple Leaf fans. They had a nine and a half per cent chance of getting McDavid going into the draft. That’s almost doubled now, with all the other teams knocked out.

But it drops to zero. Daly seems to pause a moment before revealing the Leaf logo on a white background. “The Toronto Maple Leafs will select number four in the 2015 NHL draft.” And so we move on to number three, who is… The Edmonton Oilers. Edmonton, the northernmost of NHL cities, and one of the smallest. A Canadian city, where the game’s already deeply rooted. One of the relatively few teams that can say with absolute certainty that McDavid would not be the most talented player in franchise history; McDavid may set records, but he won’t rewrite the whole record book the way Wayne Gretzky did in the 1980s. Edmonton has picked first overall three of the last five years and won the draft lottery four times in six seasons—though in some of those cases, that was simply because they were so bad they finished last by honest effort.

“And we have a winner,” announces Daly, turning over a card with the Oilers’ logo against a flashing golden background. You can’t read his face. You can’t see any difference as he opens the envelope and casts his eyes down to the card and sees McDavid’s destiny for the first time. Only perhaps as he ends his announcement—“The first overall pick in the 2015 NHL draft belongs to the Edmonton Oilers”—does a little bitterness enter his voice. But that may be only my projection.

(I’m judging all this, as I say, in retrospect. I watched the whole ceremony live, but at this exact moment I was busy falling off my couch laughing.) At any rate, Daly closes up the envelope with his odd smile, and his job’s done. Later, the video of the actual lottery would go up on the NHL website. You can see the moment when Gary Bettman’s informed that the Oilers have won the lottery. Bettman’s too seasoned, and far too careful, to show any reaction. Perhaps he seems a little weary, the weight of years pressing down on him for just a moment. Perhaps not.

The lottery win changes a lot of things. Particularly for the Oilers. Just the idea of McDavid brings instant respectability to the franchise. Over the next few weeks the team gets a new General Manager—Peter Chiarelli, who recently won a Cup in Boston—and a new coach. And, as expected, they pick McDavid at the draft. He’s a powerful addition to a lineup already boasting a full complement of young and highly talented forwards. On the other hand, while Chiarelli’s able to trade for a promising young goaltender and sign coveted free agent defenseman Andrej Sekera, the Oilers still have a defense corps consisting mainly of promising but very young kids, aging and very limited veterans, and, now, Sekera. But if McDavid won’t solve every problem, he will certainly make the Oilers a better team.

Frankly, I’m happy for Oilers fans, who’ve been through nine years without a playoff appearance. But not everyone’s so pleased. In the immediate wake of the lottery, Buffalo Sabres General Manager Tim Murray expresses some frustration: “If you could have one or two, you would naturally want one,” he says. And: “If you’re going to make a trade and they offer you the best defenseman in the league or the second-best defenseman in the league, you’re going to want the best. Anytime you can get one versus two in any walk of life, you’re going to want one.” And: “I’m disappointed for our fans.” But, he concludes, “We’re going to deal with it.” Which is big of him. One hopes Jack Eichel, who he picks at the second spot in the draft, is so sanguine.

And Bettman? And Daly? I can’t say what they think of McDavid to Edmonton. You can see the videos. You can judge for yourself. Maybe they really have no preference. Of course they’ll say they have none, and maybe it’s true. It’s just hard to imagine, given all the alternatives.