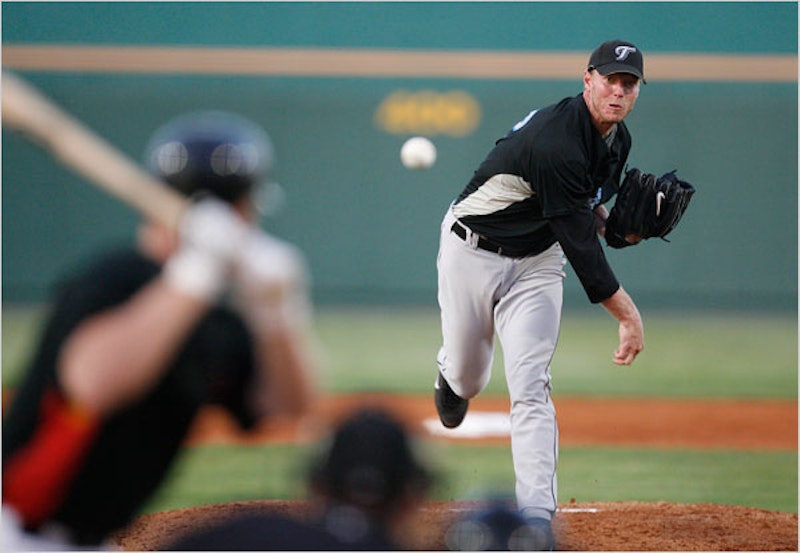 Former Blue Jays ace Roy Halladay made some headlines last week when he was pulled over for speeding twice in the same day. Halladay posted some comments about the incident on social media which kicked off a brouhaha regarding the lost velocity on the former two-time Cy Young winner’s fastball. Halladay hasn’t pitched in the big leagues in two years, and hasn’t thrown a pitch for Toronto since 2009, but the former Jays great is still helping his old squad.

Toronto shipped Halladay to the Phillies following the 2009 season in return for a package of prospects, including Kyle Drabek, Michael Taylor and Travis d’Arnaud. Drabek was the prize in the deal but arm woes and ineffectiveness washed out a promising future. He’s pitched just 10 ⅔ innings in the Major Leagues since 2012. d’Arnaud was later flipped to the Mets along with Noah Syndergaard as part of the transaction that brought R.A. Dickey to Toronto. The 40-year-old Dickey is having a terrible year for the Blue Jays as he currently leads the American League in losses and walks.

Oddly enough, Michael Taylor was the saving grace for the Blue Jays in the Halladay swap. The former Stanford outfielder was sent from Toronto to Oakland in a deal that kicked off a series of trades that ultimately ended up with the Blue Jays plugging rookie Devon Travis in at second base to start the 2015 season. Taylor was swapped for Brett Wallace, who was later traded to Houston for Anthony Gose. The Blue Jays were tantalized by Gose’s speed and defense combo but ultimately gave up on his bat. Gose was dealt to Detroit last winter for a little known Double-A second baseman.

Travis was a terror for AL pitchers in April before an injury sidelined him for six weeks. He slammed six home runs in April after hitting just 10 long balls in 100 games for Erie last season. The rookie has returned from the disabled list to reclaim his spot at second base but hasn’t homered since mid-May. The 24-year-old Travis showed excellent on-base skills during his minor league career posting an OBP of .384 in 268 games. Those skills have carried over to the big leagues as the rookie currently sports a .353 OPB to go with his early season power.

Travis is unlikely to re-create April’s home run barrage but he’s a valuable man in Toronto. A healthy Travis providing solid defense up the middle while setting the table for the imposing trio of Jose Bautista, Edwin Encarnacion and Josh Donaldson makes Toronto the most dangerous American League East contender. The Blue Jays sit 4 ½ games behind the division leading Yankees but have a league best +82 run differential and are rumored to be in the market a front-line pitcher like Johnny Cueto or Cole Hamels.