Epstein Has Cubs in Unfamiliar Territory at Trade Deadline

Chicago will go big or skip it. 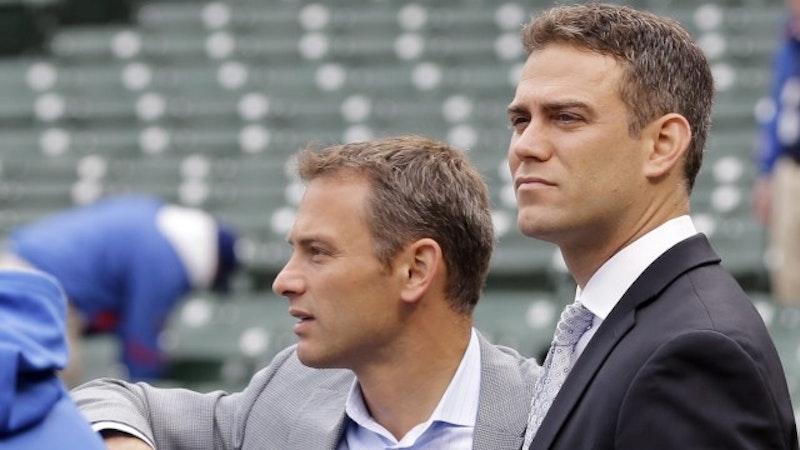 Theo Epstein, for the first time since he assumed control of baseball operations in 2011, has the Chicago Cubs in the playoff hunt. The first few seasons of Epstein’s tenure were more about undoing the sins of the past than building an instant contender. The long view drew the ire and frustration of baseball’s most forlorn fanbase as the organization continued to publicly shift the conversation to 2015. All would be right with the world in 2015. Epstein and Cubs’ GM Jed Hoyer have delivered on their promise to field a contender in 2015 and now they have two days before the trade deadline to solidify the roster.

The Cubs’ market, financial resources, and top prospects put them in an enviable position. Chicago has burned through Travis Wood, Edwin Jackson and Tsuyoshi Wada as fifth starter options and will be linked to every available ace over the next week. The price tags for the likes of David Price and Yovani Gallardo figure to be astronomic and Chicago is one the few franchises, along with the Dodgers, able to absorb the cost in talent and dollars.

I took a look back at Epstein’s time with the Red Sox to get a better idea of what Cubs fans can expect at the deadline. Epstein made deadline deals in six of his eight seasons running Boston’s front office. In all of Epstein’s deadline deals he was much more likely to deal a familiar name from the big league roster than a prized prospect. Epstein dealt Nomar Garciaparra prior to the 2004 deadline, a deal that improved the club’s defense and acquired Sox playoff hero Dave Roberts. Epstein traded Manny Ramirez to the Dodgers in a 2008 deadline trade that brought Jason Bay to Boston. He followed up the Ramirez move with a 2009 late-July trade for Indians slugger Victor Martinez. The Red Sox traded Justin Masterson to Cleveland for a season and a half of Martinez.

The trade of Masterson for Martinez broke with tradition for Epstein. Masterson was just 24 at the time and still considered one of Boston’s most promising young pitchers. In retrospect, Masterson looks like the best prospect Epstein ever dealt in a deadline deal while in Boston. He’s followed by Brandon Moss (swapped to Pittsburgh in the Bay/Ramirez deal), David Murphy (sent to Texas for Eric Gagne in 2007) and Freddy Sanchez (dealt to the Pirates for Jeff Suppan in 2003). The rest of the prospects traded by the Red Sox during the Epstein years didn’t amount to much.

So what does this tell us about the Cubs’ deadline plans? If history is any indication Epstein won’t give up the farm for a two-month rental. The Cubs are currently battling for a Wild Card spot and while adding another starting pitcher would be nice Chicago would be satisfied sending Jake Arrieta or Jon Lester to the hill in a winner-takes-all playoff game. Don’t expect the Cubs to make a big splash for Price, Gallardo or Jeff Samardzija. The Cubs probably won’t pay the price to acquire Justin Upton, another pending free agent. Chicago would be more likely to simply give a youngster like Arismendy Alcantara or Billy McKinney big league at bats rather than swap them for 60 games of Upton.

The most likely scenario involves a lower cost pitching option, maybe Mike Leake of the Reds, or a deal to acquire players that would be under team control for several seasons. Players like the Padres Tyson Ross, Andrew Cashner or even James Shields could be options as each is under contract beyond 2015. The Cubs have been linked to Phillies reliever Jonathan Papelbon and lefty Cole Hamels. I can’t see Epstein paying a premium for Papelbon but Hamels is another story. A trade of Starlin Castro to the Padres for a pitcher like Tyson Ross or as part of a package to the Phillies for Hamels would be reminiscent of Epstein’s earlier deadline blockbusters.