Cubs Chew Up Giants at Wrigley

Giants run coming to an end. 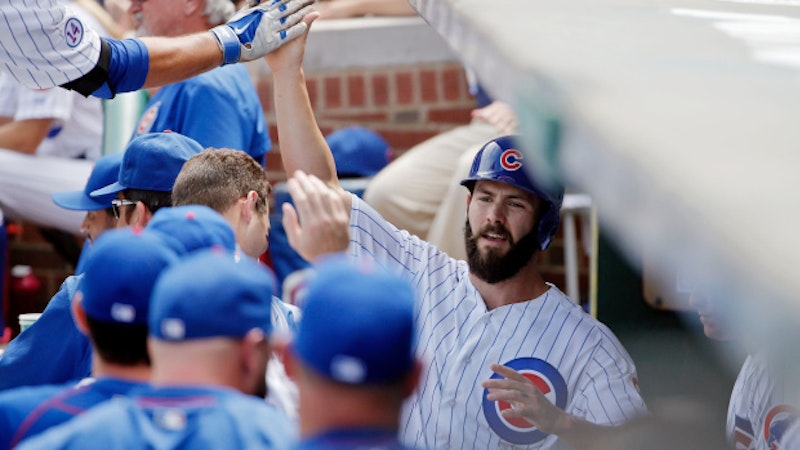 The baseball season can be thought of in terms of three segments. 162 games. Six months. Divide by three. The first 54 games used to really set the tone. When winning the division was the only option, teams had to start strong in order to have a chance at October baseball. In today’s parity-filled MLB, with the wild-card playoff-game scenario, the season’s opening third doesn’t often determine a team’s fate.

Looking back to last year, the June 1 standings bore little relation to the standings on October 1. The Orioles stood at 28-27, while the Nationals were 27-28. Both teams finished thirty games over .500 at 96-66. On the flip side, the Jays and Brewers were both ten games over .500. The Jays ended the year with a resounding thud, five games out of the second wild-card spot. The Brewers, who got off to a torrid start in April, dipped in May, before going 18-10 at June. At 51-32, Milwaukee was threatening to become baseball’s surprise darlings at the mid-way mark. Instead, the Brewers nose-dived in the heat of July, and never recovered. An 82-80 season left Brewers fans hollow.

The middle third of the season encompasses June and July, through the All-Star break and trading deadline. Teams are forced to take stock of their realistic postseason chances. We see high-level prospects get traded and ace starters move to teams that go all-in. The Blue Jays were that team this year. At .500, the Jays made two bold moves, acquiring slugging shortstop Troy Tulowitzki from the Rockies and lefty David Price from the Tigers. Thinking back to their spring training expectations, the idea that Detroit would be sellers at the deadline is wild. The starting rotation, other than Price, has been a mess. Miguel Cabrera hits the DL. Things can change fast. Toronto finished off a sweep of the Yankees this weekend, shrinking New York’s AL East lead to 1.5 games. So much for the Jays being a “.500” team.

Which brings us to the Cubs and Giants. A four game series in early August doesn’t usually have a critical impact on the wild-card race, but as Sunday’s games wind to a close, this one certainly has. Listening to the Cubs radio broadcast on Thursday during my early evening dog walk, Pat Hughes and Ron Coomer were describing their own anticipation of this series. One of the duo mentioned, “I was driving in tonight and trying to remember the last time the Cubs played an important series this late in the year, in August. I’d say it was 2009.” Baseball fans know the Cubs postseason drought all too well, but the mere fact of playing meaningful games in August (much less September) tells an even more painful recent story.

The Cubs entered Thursday trailing the Giants in the race for the second NL Wild-Card by half of a game. After a convincing four-game sweep, the Giants will limp out of town down 3.5 games, with the newly-healthy Nationals (Ryan Zimmerman and Anthony Rendon) looming in San Francisco’s rearview. Since the promotion of catcher Kyle Schwarber (nickname: Hulk, slash line: .352/.436/.625), the Cubbies lineup has been rolling.

The Giants are the even year champions of the 2010’s (2010, 2012, 2014). After starting 38-20 last year, they faltered in the middle months, eventually squeaking their way into the wild-card game, before Madison Bumgarner’s epic October run propelled them past the upstart Royals.

San Francisco’s once-dominant rotation is now in disrepair. After Bumgarner, uncertainty abounds. Rookie Chris Heston’s no-hitter was impressive, though it did come against an anemic Mets lineup (14th in the NL in runs). Matt Cain’s return from elbow surgery has been a series of unfortunate events. Former-ace Tim Lincecum is on the DL, though the injury is an inflated ERA, not a physical problem.

Though the Giants have scored runs at a surprising clip this year, It seems safe to assume that they’ll be lucky to even make the postseason. Pittsburgh currently has an 8-game cushion in the loss column, while the Cubs, Mets and Nationals all have stronger pitching staffs, and the Dodgers just added two decent arms in Alex Wood and Mat Latos. If outfielders Yasiel Puig and Joc Pederson find their grooves, the Dodgers may run away with the NL West.

After dropping the first three games of the series, the Sunday matinee gave the Cubs a rare opportunity for a four-game sweep. Jake Peavy, he of the primal screams and pulsing jugular vein, took the mound for San Francisco. Without taking you through every pitch, it was that first inning that symbolized a kind of passing-of-the-torch in the National League. It might seem ludicrous to take one inning and have it reflect on a season or future seasons for two franchises, but I’ll make the case here:

Peavy isn’t what he used to be when he dominated in San Diego. Once a flame-thrower, Peavy’s fastball reaches 91 or 92 at best, sitting around 89, while he nibbles the corners with a cut-fastball and a slider. Red Sox fans may remember Peavy’s time with Boston in 2013 and early 2014. Acquired from the White Sox at the deadline, Peavy pitched solidly down the stretch, and then pitched well in well in his first October start (vs. Tampa), before getting hammered against the Tigers (3 IP, 7 ER) in the ALCS. Peavy came back and delivered a decent start in the World Series.

Pitching at spacious AT&T Park, with the breeze coming in from the Bay, Peavy and Ryan Vogelsong have had their stretches of success by avoiding walks and keeping the ball on the corners. Back stiffness led to an April-May DL stint earlier this year. Peavy struggles against lefties, and can’t get swings and misses the way he used to. He battles, as they say, but he lost this battle, and the Giants may be losing their battle with time in the pitching rotation, as Peavy, Hudson, and Vogelsong are all pitching on fumes.

Manager Joe Maddon set the lineup with lefties in mind, moving outfielder Chris Coghlan up to the third spot. Fowler, Schwarber, Coghlan, and Rizzo to start it off.

After working the count to 2-2, Fowler fouls (alliteration!) five straight pitches back, before striking out. 12-pitch at-bat to start. Youkilis, anyone?

Rizzo’s opposite-field approach works well with two strikes. It does here, as he takes a cutter to left-center for a single.

Bryant single. A run in.

Soler works a 3-ball count, before grounding softly to third.

The Cubs are built for the future. The Giants are built for the past. Theo Epstein knows how long it’s taken to build this team, but his patience is paying off this August. Peavy throws 38 pitches in the first, but manages to survive. The Cubs will go on to win the game, 2-0, behind seven shut-out innings from Jake Arrieta. The Giants will threaten in the 9th, before three straight strike outs by Hector Rondon will end the game. One game in 162. Cubs extend the wild-card lead to 3.5 games. Still fifty games to play in this marathon season, but something tells me the Cubs are about to rampage through August and September, beating up on the lowly Brewers and the depleted Reds.