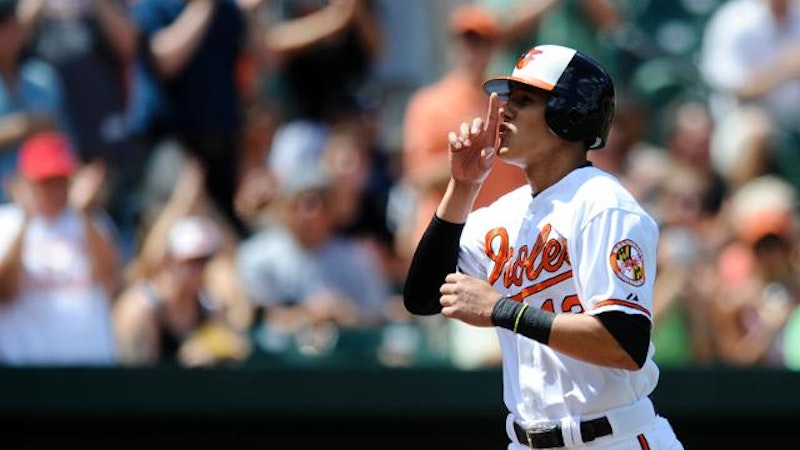 The Baltimore Orioles have been hovering around .500 in the early going of the 2014 season despite a shortage of power hitting and quality starts. The pitching figures to be a season-long concern but the home runs will come. The biggest problem facing manager Buck Showalter, at least over the next few weeks, is the club's quagmire at third base.

Manny Machado, Baltimore's All-Star third baseman and shortstop of the future, is about to begin a rehab assignment and could return to the lineup in early May. In Machado's absence Showalter has been playing Jonathan Schoop, Baltimore's second baseman of the future, at third. Schoop surprised club officials and fans with an impressive offensive showing in Spring Training and won the second base job. Since then the 22-year-old has been shifted to third base due to Ryan Flaherty's continued offensive ineptitude and J.J. Hardy's injury-plagued April.

Schoop has been a capable hitter so far, but his defense at third base has left fans clamoring for Machado's return. Schoop played a majority of his minor league games at second base or shortstop and had appeared in just 24 professional games at third base prior to the start of this season. His on the job training is hurting the Orioles, a ballclub built to play great defense and hit three-run homers. Unfortunately Showalter has little choice but to keep running him out there until Machado returns.

Machado's recovery, coupled with the back spasms of shortstop J.J. Hardy, left Showalter in a no-win situation with his infield alignment. Hardy's time in the trainer's room resulted in a game of utility infielder dominoes that saw Ryan Flaherty shift from third base to cover shortstop, Schoop shift from second to third, and the recently acquired Steve Lombardozzi playing nearly every day at second base. When Hardy finally returned to the lineup Showalter moved Flaherty's anemic bat to the bench and left Schoop and Lombardozzi in place. Lombardozzi has been a pleasant surprise with a .290 batting average but has a lackluster .624 OPS due to his lack of power.

Showalter is left to pick his poison until Machado returns next month. Schoop has been a decent run producer but he's already committed four errors in just 12 starts at third base. Flaherty is a capable and versatile defender but at nearly 28 and in his third big league season his bat makes him no more than a reserve. Baltimore fans and media who have been quick to denigrate Schoop's defense are the same people complaining about Flaherty's weak hitting. You can't have it both ways, and unfortunately neither can Showalter. With Chris Davis, Adam Jones, and Hardy combining for just two home runs through the first 19 games of the season Showalter seems to have traded defense for offense, and rightfully so.

Assuming Machado's minor league rehab assignment goes as planned over the next few weeks the Orioles third base headache should dissipate. Machado can resume his highlight reel play at the hot corner, Schoop can assume his more natural position at second base, and Flaherty and Lombardozzi can fight it out for the utility role. Maybe by that time Davis and company will have regained their long ball strokes.