Ryan Braun and Carlos Gomez make for an entertaining team. 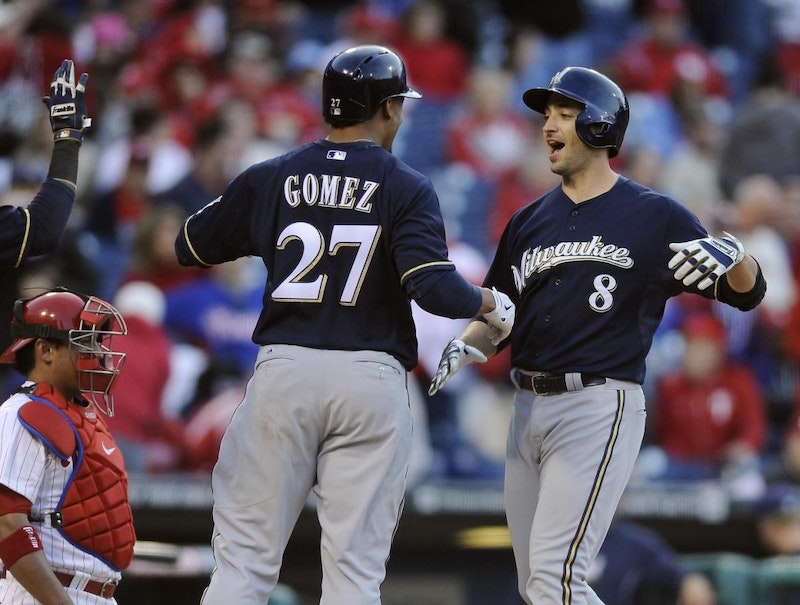 The Milwaukee Brewers have been turning heads this season, leading the N.L. Central division, and becoming one of most hated teams for fuddy-duddies across the country. The return of Biogenesis poster boy Ryan Braun, and his continued success at the plate, has confounded fans who enjoy railing against PED users as much as they like cheering for the home team. Add in the continued antics of center fielder Carlos Gomez and the Brewers' surprising early season success has traditionalists reaching for the nearest antacid.

Braun's success shouldn't be surprising given the incredible numbers he's posted in his career. To assume that all of Braun's prior success was entirely driven by PEDs is as silly as thinking that he's currently 100 percent clean. Braun served his time and is back to bashing baseballs. He's a joy to watch hit even if he is an admitted liar, cheater and jerk.

Carlos Gomez ranks alongside Yasiel Puig and Andrew McCutcheon as the National League's most exciting players. His bat-flipping antics drew the ire of self imposed MLB Sheriff Brian McCann last September and successfully pissed off Pirates' hurler Gerrit Cole last weekend. Gomez was made out to be the bad guy in both instances but I don't have a problem with what he did. If McCann didn't want to see Gomez flip his bat after a colossal home run he should've told Paul Maholm not to throw a first pitch batting practice fastball. Cole's anger was even more comical. Gomez flipped his bat on a ball that didn't even leave the park and ended up on third after scrambling to round the bases. Gomez likely cost his own team a run. If anything, Cole should've been laughing and thanking Gomez for the blunder. Gomez is an entertaining player.

While Braun and Gomez seem comfortable wearing the black hats, it’s the Brewers' pitching that has the team atop the NL Central. When Milwaukee GM Doug Melvin signed free agent Matt Garza to a four-year $50 million contract in the offseason it was widely regarded as a foolhardy transaction. Through the first four weeks of the season Garza has been Milwaukee's worst starter despite pitching to a 4.50 ERA and 1.31 WHIP in four starts. The Brewers have been led by ace Yovanni Gallardo, who’s gone 2-0 with a 1.42 and five quality starts in five turns on the mound. Gallardo has been joined by Kyle Lohse, Marco Estrada, and Wily Peralta in delivering quality starts. Through the first 22 games of the season Brewers' starters have registered 17 quality starts. By contrast the downtrodden Diamondbacks have had just three quality starts in 24 games.

Milwaukee has also benefitted from the return of closer Francisco Rodriguez. The Brewers dealt Rodriguez to the Orioles last summer and re-signed the veteran reliever in the offseason. Rodriguez has been lights out in his return to Miller Park, saving nine games in as many chances and allowing zero runs and just eight base runners in 12 innings this season. The fast starts of Estrada, Peralta, and Rodriguez may soon be distant memories but the presence of Braun, Gomez, Gallardo, Lohse and Garza could make the Brew Crew a season-long threat.