Wizards Emerging From the Doldrums

Making up for 32 years of mediocrity. 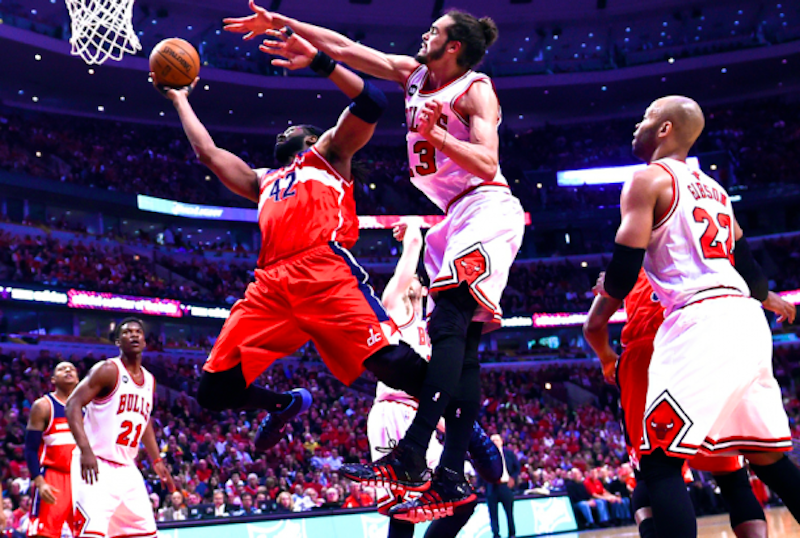 At the end of the 1982 NBA season, the Washington Bullets were only three years removed from a Finals loss, and four years from the franchise’s only championship. The Bullets were one of the elite teams of the 1970s, making the Finals three times in a five-year span. However, 1982 was the end of that run. The last 32 years have sucked for fans of professional basketball in the D.C. area. One playoff series win over the Chicago Bulls in 2005 did little to make-up for the drought.

John Wall gets most of the headlines. His speed is astonishing. His defense is chaotic and disruptive. Over the first few years of his young career, Wall has developed some range on his jumper. Like Rajon Rondo, as Wall’s game becomes more well-rounded, the more unstoppable he will be. Bradley Beal is for real.

Bradley Beal is a cool name. There’s no way around it. Nenê… like Seal… is a one-word cool name. There’s no way around that. John Wall’s name is only eight letters. You say it quickly, “JohnWall,” and he’s gone. He was there, “JohnWall” and now he’s gone. This year’s Wizards are a conundrum. They play to the level of their competition. Now that their competition is a playoff team, the 48-34 Chicago Bulls, the Wizards are playing very well. Up two games to none, after an overtime victory on Tuesday night, the Wizards have given their long-suffering fans well-deserved reasons for optimism as the teams head to the nation’s capital for Game 3 on Friday.

You may read the common sports descriptor “commanding” as a way of explaining the two-to-zero series lead. That’s the formula. A team wins the first two, and they are in “command.” Except few people expected this to be a short series, and even fewer were picking Washington. Most Wizards fans know better than to get ahead of themselves, even if TNT’s Charles Barkley might proclaim otherwise. Let’s not forget about the last 32 years of mediocrity and the hold-your-breath mentality that comes with those decades of frustration.

However, there are reasons for optimism. How can one not appreciate Bradley Beal’s shot? It appears effortless. His long arms, feet always set, the classic follow-through. Beal may become the heir apparent to Ray Allen, though it’s too early in his career to give him that lofty status. Still, his Game 2 fireworks (4 of 7 from deep, 3 huge offensive rebounds, 2 steals and a block) helped push the Wizards past the lunch-pail Bulls. Those Bulls who dive all over the floor for loose balls, but can barely manage a shot attempt that scrapes the iron.

Nenê deserves praise for his stabilizing presence and versatility. Among the most dynamic power forwards in the game, Nenê’s strength is his unpredictability. He is equally able to face-up and drive against slower big men, as he is able to facilitate the offense from the elbow. Nenê takes pressure off of Wall and opens up space.

What I love about this Wizards team is Trevor Ariza. Cast to the bottom of the NBA’s wing-man pools, Ariza has transformed his career this season, leading the NBA in corner threes. A career 34.7 percent shooter from beyond the arc, Ariza’s length allows him to release over the outstretched arms of defenders. His defensive instincts allow him to crash passing lanes, and his speed propels him to follow Wall down the court in a blur, then hide in the corner waiting for the whip pass.

These Wizards are putting smiles on the faces of unsuspecting fans for all of the above reasons. They have a chance to advance. That’s all D.C. can ask for.

—Jonah Hall writes about the NBA and other things at www.darkoindex.com and on Twitter @darkoindex