LeBron, Joba and Schilling stand up for their kids. 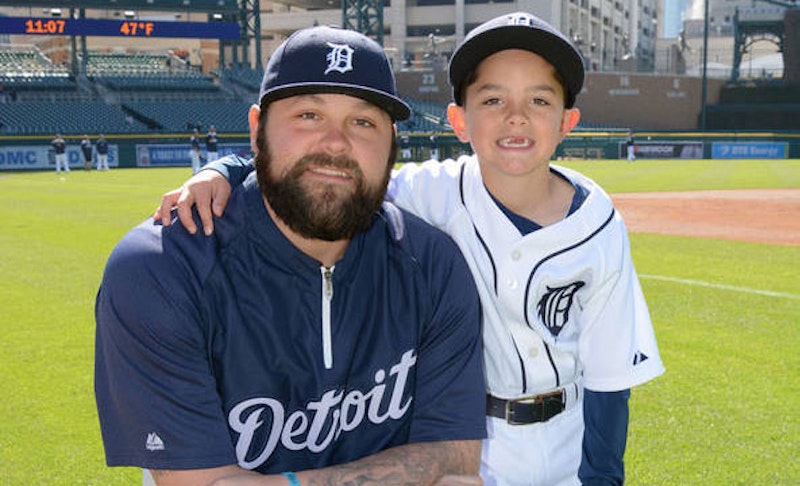 The sports headlines are filled with men behaving badly, often centering on professional athletes. The players’ misdeeds and the frequent idiotic commentary on Twitter and other social media outlets routinely tests one’s faith in the sporting public. While athletes can make terrible role models, there are still a lot of people in sports doing good things. The past week happened to be a particularly uplifting one for fatherhood in professional sports.

The week started with LeBron James publicly chastising college basketball coaches who are already hot on the trail of his 10-year-old son. Apparently there are some high profile programs reaching out to the fourth grader with a few floating scholarship offers. James didn’t specify, but Ohio State coach Thad Motta is rumored to be one of the big name coaches scouting elementary school gyms. James wants to keep Motta far away from his son. He’s right. The recruiting of a kid who can’t get into PG-13 movies is downright creepy. In the race to get the jump on the competition college coaches are reaching out to younger kids and reaching further into murky waters. James was a prodigious talent who went pro in large part to support his single mother. His sons are under no such socio-economic hardship. James is justified in wanting his kids to enjoy being kids for as long as possible.

Joba Chamberlain was last seen in October pouring gasoline on Orioles’ rallies during the American League Divisional Series. Chamberlain filed for free agency following his disappointing playoff appearances and the Tigers set about building a new bullpen. Despite being sought by the Dodgers, Rangers and other teams, Chamberlain decided to return to Detroit thanks in part to a conversation with his eight-year-old son. After making $2.5 million in 2014 Chamberlain spurned similar offers to return to Detroit on a one-year deal with $1 million guaranteed. Chamberlain credited a call from his son to the son of injured DH Victor Martinez with swaying his decision. Joba’s boy was calling Victor’s boy to check up on his rehabbing dad. The sense of family and belonging exhibited by his son helped Chamberlain decide on his 2015 destination.

At one time Curt Schilling was famous for his bloody sock and October heroics. Since retiring from baseball Schilling has garnered headlines for his bankrupt video game venture and draconian views on evolution. Schilling took a break from his duties with the Flat Earth Society last week to celebrate his teenage daughter on Twitter. Schilling’s daughter Gabby received a scholarship to Salve Regina University and the proud pop gave her a digital cheer. The Twitter trolls struck back fast at both Schillings, making disgusting comments directed at Gabby and insulting her dad. Schilling came his daughter’s defense and took action against the foul-mouthed Neanderthals publically outing a pair and costing at least one person a part-time job with the Yankees. Schilling also authored a scathing blog post and appeared on numerous news shows to denounce cyber-bullying. Well done, dad.