Is the Ryan Braun Controversy Good For Baseball?

This year's MVP gets a 50-game suspension after recent drug testing, but why? 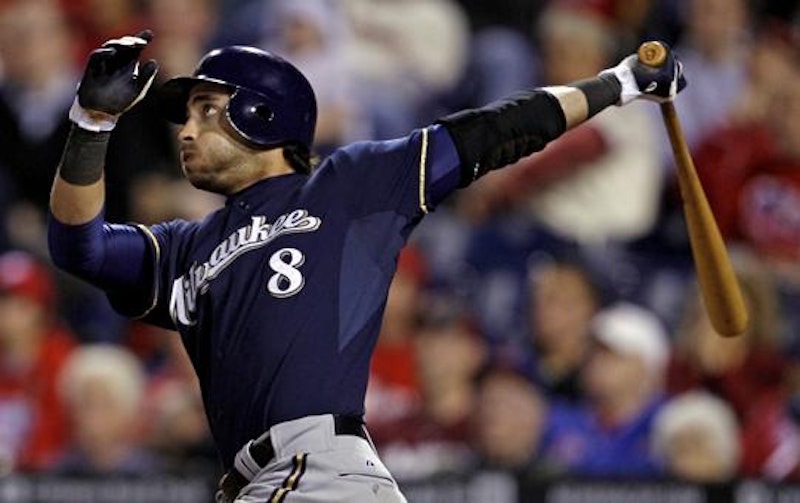 When I first heard of Ryan Braun's looming 50-game suspension for PED use my reaction was "Damn, he was a keeper on my fantasy team."  No worries, just like the Brewers the Whistle Pigs will survive. Braun's reputation is another story.

The thought of this year’s National League Most Valuable Player being suspended for the first 50 games of the 2012 season initially struck me as another black eye for baseball. Just what the game needs; the Hebrew Hammer labeled a drug cheat, and so soon after the new CBA included provisions for human growth hormone testing. As the story began to unfold my opinion did a 180 and now I think that a Braun suspension could be good for baseball.

The "Should he keep it or shouldn't he keep it" debate about the MVP award is another argument all together. Barry Bonds was voted the MVP on numerous occasions after his steroid abuse went from suspicion to allegation to foregone conclusion and no one ever asked for those trophies back. The BBWAA voted Braun as the NL MVP based on the information that was available to them at the time of the vote. If they had followed my suggestion and voted for Matt Kemp they could have avoided all of this tsouris. The positive test occurred during the postseason so anyone suggesting that Braun used PEDs during the regular season is just making assumptions. Perhaps the assumption is logical, but it's still an assumption. If you think Braun will return the award you're nuts. His camp has launched an aggressive spin campaign against the testing results and the chain of custody. Giving back the award would be an admission of guilt and Braun doesn't appear to be full of contrition.

Braun is the preeminent slugger on the hometown team of MLB commissioner Bud Selig. At one point Selig was the owner of the Brewers. Braun's a young star, the reigning MVP, and a clutch playoff performer for a team that hopes to compete for the foreseeable future. If Braun can be suspended under baseball's enhanced PED policies, then anyone can be suspended. Baseball seems to be so serious about making the game clean that they've turned their attention away from mop-up relievers and reserve catchers to All-Star sluggers.

I've never been a fan of Selig's. He turned a blind eye to the game's rampant steroid abuse for over a decade as the game's popularity and revenues soared. He's done a terrific job for the owners as revenues and team values have reached record highs during his tenure but he's done the fans a disservice. The cost for the record growth was the sanctity of the sport's most revered records and career achievements. No one should ever let Selig off the hook for his transgressions. At best he's a hypocrite with bad hair. At worst he's a lying hypocrite with bad hair. That aside, the inclusion of HGH testing in the new CBA and the likely Braun suspension give teeth to baseball's efforts to clean up the game.

Fans and players alike will deal with the reverberations of the "steroid era" for years to come. The Hall of Fame candidacy of players like Jeff Bagwell, Mark McGwire, Barry Bonds, Frank Thomas, etc. will spark heated debate each January for the better part of a decade. Every time a player like Jose Bautista goes from journeyman to feared slugger people will make accusations. Bud Selig willfully put his head in the sand as baseball's greatest records were smashed but perhaps his saving grace will be advancing the clean-up of the game he was supposed to be protecting all along.