Winning is Nice, But Skins Need a Franchise QB

For that, they'll need a solid draft position. 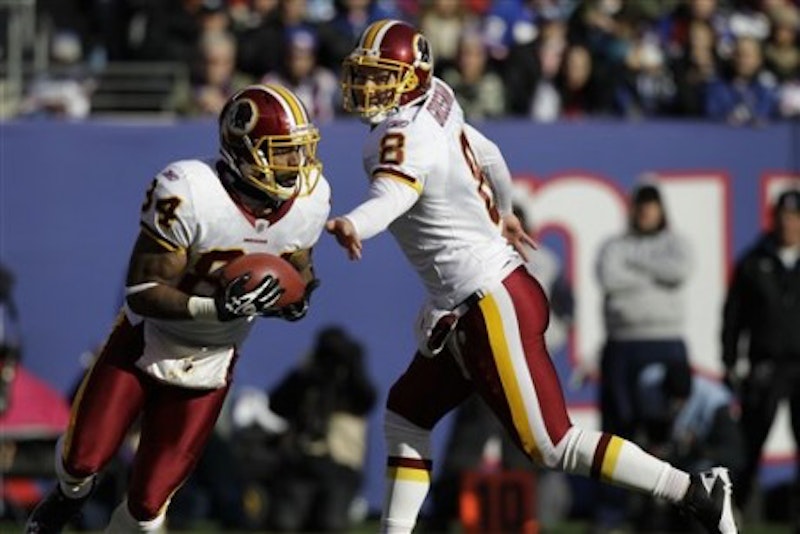 On Sunday, the Redskins severely damaged their draft position and helped put the hated Dallas Cowboys into first place in the anemic NFC East. And yet it felt like a great day for the franchise.

It’s so easy to sit back after a win and think everything is going to be all right. The team is on the right path. But the truth is, you need a franchise quarterback to win anything important in the NFL. That the Redskins don’t currently have one is as big a problem as a team can have.

Sure, it is possible for a team to win the Super Bowl without a franchise quarterback—the 2000 Baltimore Ravens famously won with Trent Dilfer—but you need to be the absolute best at something and very good at everything else to get it done. When I say the best at something, I don’t mean the best that year. I mean one of the very best ever. The Ravens won with a legitimately all-time best defensive unit. To put this in some perspective, the 2000 Ravens allowed 165 points during their season. This year, every team has already given up more than that and there are still two weeks to go. Last year’s Super Bowl champs, the Packers gave up 75 more points than the 2000 Ravens, and they were the second best defense in the entire NFL. So it’s very difficult to do much without a franchise quarterback.

The last ten Super Bowl winners (every team after the 2000 Ravens) featured the following quarterbacks: Tom Brady (three times), Ben Roethlisberger (twice), Peyton Manning, Drew Brees, and Aaron Rogers. They're all Hall of Fame quarterbacks. The two exceptions: Eli Manning of the New York Giants, a fine quarterback who got somewhat lucky in the big game, and Brad Johnson of the Tampa Bay Buccaneers, who played on a team with a defense that, while not quite Ravens-level, was far better than any other in the league that year.

But back to the Redskins. Their defense is right in the middle in terms of points allowed this season—they’ve gotten unlucky with turnovers, and they’ve had slightly more than their share of injuries. In short, they may have some luck coming their way, but it isn’t going to matter if they don’t get someone who can throw the ball at a Hall of Fame level.

Unlike in the 80s, the Redskins level of competition is low. If they put together a decent team, they could make the playoffs for years to come. Yesterday the Redskins dominated the Giants, a probable playoff team, with an offensive line composed of rookies and castoffs from, oddly enough, the 2008 Seattle Seahawks. The scheme isn’t the problem. Head coach Mike Shanahan has experience plugging players into his system and having success, or at least, not experiencing a huge drop off. So the team can even experience a few injuries along the way and it probably won’t destroy their season. These are great things. But they’re still missing the biggest piece in their championship puzzle. The team needs a franchise quarterback.

Fortunately, the upcoming NFL draft is supposedly chock full of them. At 5-9, the Redskins are in line for a top ten draft pick, which the team can use to acquire their next franchise quarterback. Of course the Redskins won’t be the only team in need of a Hall of Fame quarterback. There will be other teams jockeying for position in the draft.

If the team keeps winning games, they may find themselves outside the Great Quarterback Derby of 2012. The good thing is that the NFL allows the trading of draft picks. This means that even though the team may end up with the tenth pick in the draft, they could negotiate a deal to move up into the top three and grab a quarterback who could fulfill their desperate need for high quality play at the position.

If the team keeps winning games, they may have to move up more than just five picks. The position is so important that, as a fan, you almost want the team to lose. So of course, this being the Redskins, they’ve found a second gear. Fortunately, because the team can trade up in the draft regardless of where they finish the season, these last few games aren’t as important as they might be in a different sport.

The Redskins are playing some good football and they’re actually winning a few games as the season comes to a close. They may as well keep doing so; it'll surely help morale and give the franchise something to build upon in 2012. But far more important to the future success of the team is the quarterback position. Argue all you want about whether Rex Grossman is good or bad. The team’s brain trust has to understand that they aren’t going to really win anything important as long as Rex Grossman is under center. More than anything, they need a franchise quarterback. Even if they trade up to the top of the draft, there is no guarantee they’ll get one in next year’s draft. The only guarantee is we’ll be having this same conversation next year if they don’t try.