Pujols Puts a Price on His Legacy

And for that kind of money who can blame him? 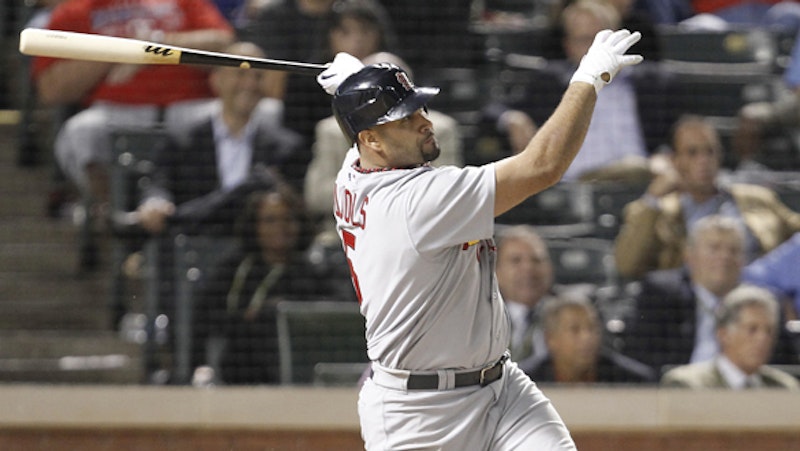 The Angels’ signing of free agent slugger Albert Pujols sent ripples through the sports world last week. Pujols was vilified in St. Louis, welcomed as a savior in Southern California, and compared to that bastard LeBron James at coffee shops and water coolers across the country. Pujols may not be the new Stan Musial, the beloved first baseman who spent his entire career in St. Louis, but he is filthy rich. Let the record state that for all his greatness no one ever offered Stan the Man a quarter billion smackers to play baseball.

I understand why Cardinals fans are upset. It's their job to get excited/pissed off whenever their favorite team does/doesn't sign a big time player. The fact that the big time player in this instance is a three-time MVP and two-time World Series champ who had played his entire career in St. Louis only adds fuel to the fire.

But just as Cleveland Cavaliers fans shouldn't have been upset with LeBron James when he took his talents to South Beach the St. Louis fans shouldn't direct their ire at Pujols. Yeah, LeBron was kind of a vapid dick for creating a TV special to announce his "decision.” But would you ever choose Cleveland over Miami? The free agency of Pujols didn't sneak up on the Cardinals last week. They've known this day was coming for years. They probably had a pretty good idea they weren't going to go all in on Pujols when they inked Matt Holliday to a seven-year/$120 million contract following the 2009 season. The writing was on the wall when St. Louis didn't get Pujols signed to an extension before the 2011 season.

We'll likely never know the full extent of the interest in Pujols from the Cardinals or other teams. The Marlins reportedly made a 10-year offer with the money ranging from just over $200 million to $275 million depending upon reports. The Cardinals’ deal was for either nine or 10 years, depending on whom you believe, and for substantially less than the Angels’ offer. There were also reports of a "mystery team" that trumped the Los Angeles offer.

My guess is the Cardinals went to nine years, just as they had last spring, and wouldn't budge. The Marlins’ offer was more likely closer to 10 years and $200 million than $275 million. I'm calling bullshit on the "mystery team." I think that was a creation of the Pujols camp so that they could say going to the Angels wasn't all about the money because they could've gotten more elsewhere. Frankly, who cares?

As my wife tells the children, "You get what you get and you don't get upset." Pujols got his $250 million, it's not our money, so why is everyone so upset? I've read so many comments about the stupidity of the Angels and how they will regret the deal and blah, blah, blah. So what? It's owner Arte Moreno's money and if he wants to guarantee $25 million to a 42-year-old first baseman then so be it. I'm sure he has a valid business reason for it. We can project Pujols' WAR and VORP for the next 10 years but none of it really matters because the Angels gave him the money.

As for Pujols' legacy in St. Louis, it’s certainly tarnished. He posted historical numbers, won championships, and donated countless dollars and hours to charity. That should count for something. The name Cal Ripken Jr. has popped up a lot in the aftermath of the Pujols signing. I've heard more than a few times, "He could have been the Cal Ripken of St. Louis." There are a few major differences between Ripken and Pujols: Ripken was a hometown boy. He grew up just north of Baltimore and his dad was an Orioles coach. Baltimore signed Ripken to an extension before he made it to free agency. The Cardinals failed to lock up Pujols thereby exposing him to the open market. The dollars don't match up. Ripken made just over $70 million for his career. Pujols has already made $104 million and will make at least another $250 million from the Angels. We should also consider that Pujols signed a team-friendly eight-year extension with the Cards that bought out his first five years of free agency. If anything Pujols was drastically underpaid over the past eight years. If Ripken had reached free agency and the Yankees offered $50 million more than the Orioles, the Iron Man would've worn pinstripes.

I don't think it's fair to compare Pujols to Ripken or Alex Rodriguez. A-Rod is a mercenary who sells himself to the highest bidder. Pujols already made one long-term commitment to St. Louis and delivered staggering personal and team success. When he asked the team to pony up and compensate him for those efforts the Cardinals decided it was in their best interests to let him walk. That's the Cardinals’ business and it was probably the right choice for the organization, but it doesn't make Pujols a money-grubbing douchebag. Pujols sold his legacy in St. Louis for about $50 million. He can start working on a new legacy in Los Angeles, and rest assured it will be well-funded.