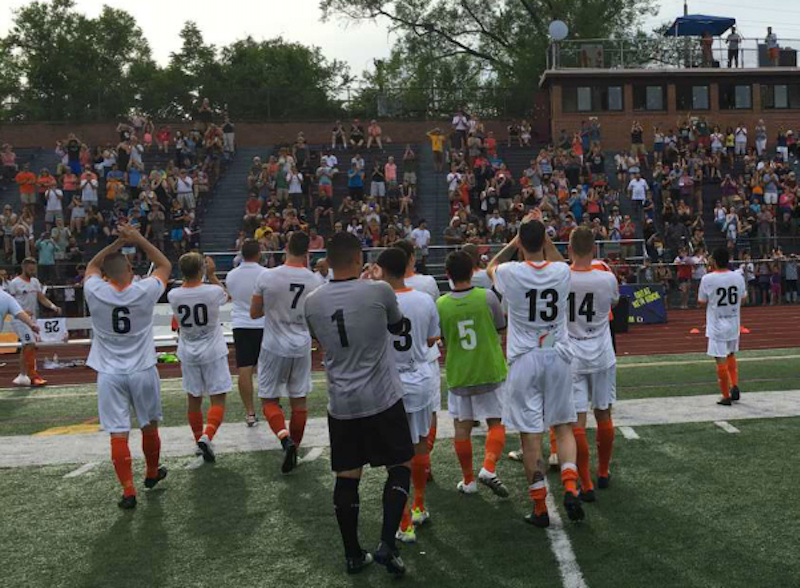 Midsummer has brought a soccer intervention, of sorts. Not just the Copa America tournament or the UEFA Euro championship, but instead the urgent enthusiasm came from a local side in Kingston, NY toiling among the depths of an obscure semi-pro circuit. Kingston Stockade FC wrapped up its debut season in the National Premier Soccer League this past weekend while the world was watching France fall to Portugal.

As my MLB team plummeted into an inept abyss, I found myself growing more fond of the local soccer side enough to return to fanzine publishing, something I have not done for two decades. As the soccer fanzine brought astonishingly positive and nostalgic feedback (and a few blank stares from Millenials), the Pittsburgh Pirates, loosely the subject of my previous zine efforts, righted the ship and found themselves back in the race as the All-Star break arrived.

The last time a local soccer side caught my attention was the New York/New Jersey MetroStars of Major League Soccer back in the mid-1990s. The supporters club was a blast and the tailgate parties at Giants Stadium were much more entertaining than the product wedged onto the AstroTurf nightmare inside the dreadful NFL facility. The supporters club would rent buses to follow the MetroStars to D.C. or to Foxboro, and those were raucous journeys filed with Anglophile soccer nerds loading the onboard VCR with "Trouble in the Terraces" documentaries about English football violence.

Attending a Stockade road match was far from the collective buzz worked up by the old MetroStars gang. The Kingston team closed out the season with a weekend pair in the NYC suburbs—first a trip to Pelham, NY, and then a Sunday match in Hempstead against defending league champions New York Cosmos B.

I ventured to Pelham solo on Saturday afternoon, heading south through the hills of Putnam County and into Westchester where the tax burden drags locals down and even the most innocent homeowner on Pelhamdale Avenue has a hateful scowl as they angrily pull weeds from driveway cracks. Descending from the Hudson Valley means sacrificing the elbow room of Dutchess County. Down there the spaces are tighter, there is a cheek-to-jowl reminder that NYC is just over that next overpass or around that harbor bend or at the end of that parkway traffic jam.

The New York Athletic Club soccer team plays at Travers Island, which is "the country home" of the toney New York Athletic Club on Central Park South. The NextTurf soccer pitch is plopped in the front yard of the clubhouse which has a heavily guarded backyard overlooking the Long Island Sound. Given the price per square foot I'm sure someone in the boardroom is regretting the soccer pitch idea, especially given the miniscule turnout of NYAC “fans” for the game against Kingston on a cool afternoon. Stockade FC road support was robust, much like their home games. Stockade captain Jamal Lis-Simmons told the 963 fans on hand at the final home game last week that the team was accustomed to playing "in front of 40 people" while on the road. The Captain speaks the truth. At Travers Island, there were no proper seats, so people leaned against railings and glommed spaces on a few park benches aimed in the direction of the action on the field. There had been a wedding or some function at the club and a white marquis tent was still standing on a bluff above the pitch with some leftover flowers in tiny vases. The vibe at Travers Island was part Bushwood (from Caddyshack) and part upper class decay. Old-fashioned clubs like NYAC seem to be struggling in these times as the younger money doesn’t buy into the exclusive sanctuary idea with its laundry list of rules and conduct suggestions. Some of the young men working the pool area seemed to have an air of self-mockery throwing back to the era of The Official Preppy Handbook.

Much was lacking at this NYAC home match. No PA system or announcer, no sponsors, no banners, flags or God forbid an actual game program. There was a smattering of half-assed landscaping here and there around the pitch and the sloped viewing area. The puny scoreboard was erected at a random distance way beyond one end and appears to have been purchased from Montgomery Ward sometime during the Jimmy Carter administration.

They were even missing a corner flag as the winged-foot wonders are clearly an afterthought around the sparse lockjaw crowd at Travers Island with its saltwater pool, yacht club and rowing house.

Stockade FC had blanked NYAC back in Kingston on an incredibly hot afternoon, and when captain Lis-Simmons nailed home a header to put Kingston up 1-0 it looked like another easy three points.

Across the bay there was noise pollution from some type of hip-hop boat party with the deep bass beats carrying over the NYAC pool area and onto the soccer field, lending some Brooklyn street cred to the scene and also an odd feeling that the fun was indeed located somewhere else in the vicinity.

There remains something charming about the YouTube live feed provided by Stockade volunteers and the downscale competition of the NPSL, which barely maintains a website. Kingston Stockade soccer is played on an endearing small-scale in this era of monolithic sports giants. The small-scale of it all does not work out well for the referees and officials. Leather lungs can definitely make their point when the men (and women) in charge make mistakes. One Kingston fan giving it to the ref was drowned out by a low-flying seaplane, which goes with the territory. The conservative ref let the lads play (and shove away), and NYAC equalized off a free kick that dropped at the top of the Kingston box with several Stockade defenders caught flat-footed as an unknown NYAC player booted it into the back of the net. The game ended 1-1, and Kingston would be trounced the next afternoon in Hempstead, thus concluding their opening campaign at 5 wins, 8 losses and 3 draws. Not bad for an initial run in kind of a dodgy league. And I’ve got to hand it to Stockade FC chairman Dennis Crowley who did not take the cheap route and give the team a “regional” name to draw from a wider fanbase like every new franchise formed anywhere in the past decade. Crowley put the team smack in the middle of Kingston, a city trying to right its economic ship, called it Kingston Stockade FC and let it fly with merchandising, marketing and savvy promotion. The big attendance numbers showed the cliché rings true from Field of Dreams—if you build it, they will come. Even if it is a team named after a fence.

At the end of the week it will be back to baseball after the Cubs exhaust themselves even more at the All-Star Game in San Diego. The NL Central battle should be a bloody one the rest of the way, almost enough to inspire some kid (or a 52-year-old taxi driver) somewhere in Pittsburgh to start up a fanzine and get in on the fun.

—Spike Vrusho is the author of Benchclearing: Baseball’s Greatest Fights and Riots (2008, Lyons Press); former publisher of Murtaugh fanzine and current publisher of The Fence Post, the unofficial fanzine of Kingston Stockade FC, available only in Xeroxed print at the Stockade games or in various bars around Kingston and Rhinebeck, NY.