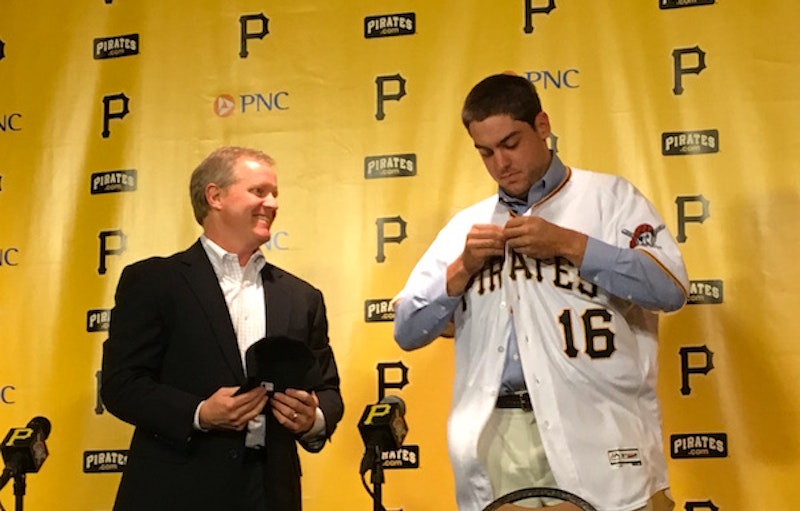 For Will Craig, the Pittsburgh Pirates first round pick in the 2016 MLB draft, the first month of his professional career has been a horror show. He was kind enough to bring his nightmare parade into my backyard so I could see it in person. And he did it during the All-Star break, which means the big club isn’t playing and I can attend a minor league game with full gusto.

Craig plays third base for the West Virginia Black Bears, a short-season Class A Pirates affiliate based in Morgantown. They ventured to Fishkill, NY, to square off against the Hudson Valley Renegades, an affiliate of the Tampa Bay Rays. Both squads compete in the somewhat reinvented New York-Penn League and were hovering around .500 with 25 or so games under their belts. Craig was the 22nd selection of the first round of last month’s draft, with the Buccos immediately crossing “obtain corner infielder slugger” off their to-do list. At Wake Forest University, Craig knocked the cover off the ball and was ACC Player of the Year as a sophomore and was even known as a closer-type pitcher with mid-90s heat as well as a masher at the plate who was also a first baseman. The Pirates didn’t want him as a pitcher, though. Their Tennessee area scouts had been drooling over him since his high school days in Johnson City, and though he passed on a Kansas City Royals contract offer in the 37th round of the 2013 draft, he was keen on signing with Pittsburgh this year, leaving Wake Forest after three seasons as a Demon Deacon.

So there he was leaning against the dugout rail before the pregame stretches at Dutchess Stadium in the shadow of Interstate 84 as it prepares to arc over the Hudson River. The stadium is a disjointed collection of outdoor seating which the game program brags “was built in 71 days.” And it kind of shows, given the amount of zipties used through the shopworn facility. This comfortable night in mid-July was Craig’s 21st game in a West Virginia uniform, and his average was .164. with no home runs and six RBIs. By the end of a long night for the Black Bears, Craig would be at .159. The basement-dwelling nabob blogger types are starting to take notice, though their favorite phrase “small sample size” applies here, it looked to me like Craig was lost. He was uncomfortable at the plate with his wrists heavily taped. He is 21 and batting clean-up. His first plate appearance was a sky-high pop up to short center with a runner on first base.

Maybe his $2.2 million signing bonus makes him somewhat of a pariah at this low level of pro ball? There are other bonus babies aboard the West Virginia ship—in fact, most of the short-season Class A teams have rosters filled with dudes rushed from draft day to a quick contract signing and then off to some Trailways outpost in the sticks or Appalachia or the Gulf Coast.

The six-foot-three, 235-pound Craig’s on-field body English and posture still says “pitcher.” It’s the way he holds his wrists and walks in small, gingerly steps, somewhat leg-heavy with big Nike cleats. The ball isn’t coming off his bat with much authority, as if the host swinger misses gripping the old aluminum stick which served him so well back in his Winston-Salem days.

Craig isn’t a dugout rail leaner. He prefers standing at the end of the bench, arms crossed like Veruca Salt waiting for the chocolate factory tour to begin. The dugouts at Dutchess Stadium are tiny and barely hold the rosters. Craig stands out because of his size and the blaring white wrist tape.

His second at-bat of the game was interrupted when his teammate Stephan Alemais was caught stealing second. Alemais is a shortstop out of New York City via Tulane University and was drafted in the third round by the Bucs last month. Though it was a sparse crowd at Dutchess Stadium, the young guy in the seat to my left was wearing a new Pirates hat. I saw him greet Alemais warmly at the fence before the game. “We used to play ball every day for 10 years,” the kid said. Alemais left New York for a Florida prep school to develop his mad defensive skills and eventually play Division I college ball at a warm-weather school. I asked the kid next to me where they played ball every day. “In the basement of a building,” he said. There was an intensity and an underlying sadness to Alemais’ pal. He said he was mad when the Yankees got Didi Gregorious because he dreamed of his friend Stephan playing short for the Yanks. He had lots of questions about minor league ball, the logistics and the organizational hierarchy. “How many fans here are Tampa Bay fans?” he asked. “Few to none,” I replied scanning the lower Hudson Valley crowd that still gets a kick out of players named “Jose.”

My seat neighbor asked what I was writing in my notepad and I told him I write articles about failure and loss and futility in the sporting world and I was here to witness the stumbling baby steps and subsequent desperation surrounding the Buccos’ first round draft pick. “Well, your real story should be how the Pirates are better off with their third round pick,” he said, motioning at his childhood pal and indoor baseball specialist manning the shortstop hole. I mentioned Craig’s signing bonus and he was astonished. I wondered if he was aware his old school buddy Alemais got a cool half-million from Pirates brass to ink his contract. Instead I asked him if he kept playing ball himself. He said no, and then something about hating the coach, and opting for football, and then drugs. Ballpark silence ensued. The human burrito race passed the time between the top of the third and the bottom of the third.

It was odd the way Craig stood in the batter’s box for a long time after Alemais was caught stealing for the third out. It was like he wasn’t seeing the whole field. When his at-bat resumed in the following inning, it was a 1-1 game and Craig swung late on a fastball and it was slicing toward medium right field where it was easily gathered in for the first out. With a vacant stare he jogged back to the Marx Bros oceanliner cabin of a dugout. The Bears had won the night before 1-0 behind some strong pitching. Craig had an oh-fer in that game as well. He’d told reporters after the draft he was determined to hone his fielding skills in the minors. He got plenty of chances in this game as the pull-happy Renegades bashed liners at the bag, popped up on the left-side of the infield several times and careened bouncy grounders off the NextTurf surface right at Craig’s mitt. He made a few spectacular plays, got a favorable call on a 5-3 putout from the first base umpire, and showed off a very strong arm from the hot corner. The way Pirates have gone through third basemen since the Bill Madlock era bodes well for the lad, but the pitcher-type batting average is just not going to cut it.

The wheels fell off for the Black Bears when they yielded six runs in the seventh inning to give Hudson Valley a 10-2 lead. Much of the damage was done against Pirates’ eighth-round pick Dylan Prohoroff, a right-handed hurler out of Cal State-Fullerton whose $160,000 signing bonus might explain his walking in runs and giving up six in two-thirds of an inning. Two of those runs came on Craig’s muffed grounder and errant throw to first, a two-error play for the kid adding another stanza to his Harmonica Shah blues song of a career so far.

Craig had two more at-bats against the Renegades where he enthusiastically ran the counts full and drew walks. His slightly pigeon-toed batting stance reminded me of a right-handed Rob Mackowiak. It should be noted many of these players still seemed to have the first-stint in pro ball jitters. Hard-nosed Black Bears catcher Arden Pabst passes the eyeball test but is hitting .190 or so. Pitcher Billy Roth came in as a reliever and looked like he might be sick right there on the mound. In the end, it was a 10-3 loss for West Virginia and a long bus ride back to Morgantown where the Auburn Doubledays were coming in the next night for a three game series.

The locker rooms at Dutchess Stadium are not connected to the mini-Tupperware dugouts. After the game, players have to walk down the right field line to a separate building. The Black Bears trudged one-by-one through the celebrating line of Renegades players. There was Craig, carrying his brain bucket and just two personalized bats for the loser’s stroll past the Culligan Man billboard and the Friendly Ford foul pole and into the mothy night with a breeze pushing clouds eastward toward Brewster. The players were not grouped together as they walked, and it looked like a short-season team might not get to gel before some get called up in August to higher rungs on the ladder. The old saying about the Red Sox long ago was “25 players, 25 cabs.” Well, these bus-riding prospects hope to someday be able to hail a big-city taxi after their work is done at the ballpark. For now, it is just a lot of Pennsylvania Turnpike ahead of them, including one player who already has two million dollars sitting in a bank account somewhere in Tennessee.