The Ethics of Watching Football

Much television is a spectacle of suffering. 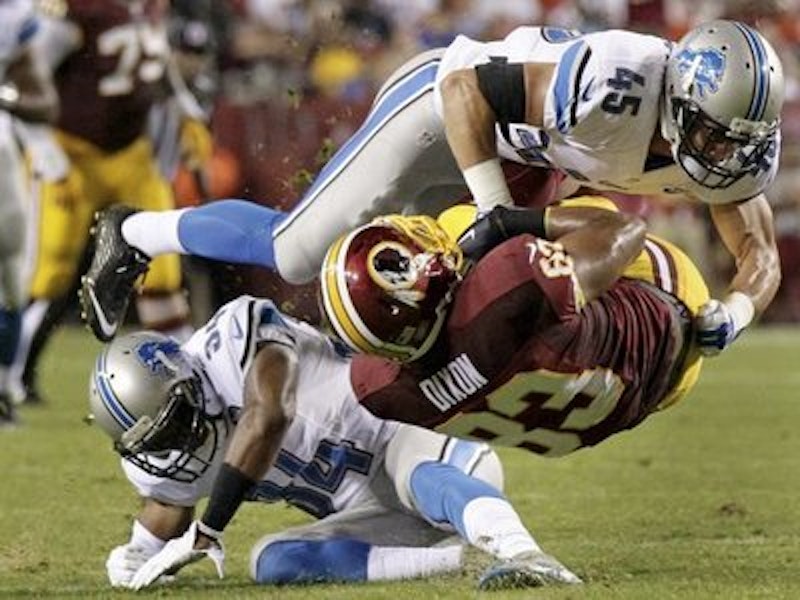 Saturday at 10 a.m. found me watching ESPN's College Gameday. It told me the inspiring story of Florida linebacker David Reese, who made 12 tackles in a game last season against LSU with two broken wrists. Then he played against Alabama in the SEC championship game. After that, he finally told his coaches he was in pain.  He played because "it had to be done," he told the SEC Network.

That's sort of amazing. That's courageous. That's insane. And one thing that disturbs me is that I did watch those games. They were excellent. Sometimes you watch a weekend of football, and start to realize that you’ve spent a significant time seeing people carted off the field, their knees blown out, their brains bruised, their ribs broken. At a self-reflective moment it's enough to make you wonder.

By around 3:00 on Saturday, I was watching the Maryland-Texas game. I was amazed how well my Terps were doing. Then they carted Antwaine Richardson off the field on a stretcher while teammates prayed and cried. Next they tended to Terps starting quarterback, Tyrrell Pigrome; he limped off with assistance. Those are college students, playing for my alma mater. But Maryland won, 51-41: best win for the program in awhile; first time they beat a top 25 team since 2010. I was thrilled, and felt sort of guilty about it.

As my father often reminded me, I was cheering for the Washington Redskins—the team that dare nor speak its name on campus—before I could walk. I was a crazed young fan through the eras of Lombardi, George Allen, Sonny Jurgensen, Charlie Taylor, Joe Gibbs, John Riggins, and co. Even as I rooted on through the decades, however, I started to realize that I was delectating a spectacle of pain.

In 1974, my brother Bob and I were dating two sisters. One Sunday the four of us watched the 'Skins game at their house, then for some reason headed out for a drive and ended up at a bar out near Thurmont. There were three huge guys in the next booth that I recognized: Redskins linemen, including all-pro defensive tackle Diron Talbert. They had their legs propped up. They groaned even when raising their glasses. "I need to take a leak but I can't stand up," said one.

As you might imagine, we were very concerned about the playoff run. Bob finally leaned across and asked them how bad they were hurt. They laughed in his face. "It's always like this," said Talbert. "Usually worse. We'll be good." We admired those tough motherfuckers, but also watched the game a bit differently after that.

Forty years later, Robert Griffin electrified DC. Rookie RG3 was an astonishing athlete, leaping about like a young Michael Vick: so fast, so bold, and so elusive. He ended up having various difficulties; one of them was certainly the cumulative effects of all the knee surgeries. The NFL features great athletes, and it breaks them down or just breaks them; I think of Bo Jackson, for instance, and how short was the time we got see him at his apex, and why.

The NFL presents an astonishing athletic spectacle, whether it's Odell Beckham catching a pass or Aaron Rodgers throwing one. But the injuries are not merely an unfortunate side effect. What’s so compelling about football is that, for example, that guy just made a leaping, one-hand grab or lofted a perfect fade while big aggressive people were trying to flip him over and crush him. I do love baseball, basketball, and soccer. But they don't yield quite that kind of spectacle of aggression, courage, and improvisation in physically threatening situations. It gives you a vicarious adrenaline rush, but that might make the situation morally worse; we're getting off on the spectacle, which also entails the pain; the danger is part of what makes it compelling.

Obviously, all sorts of people are worried about football and are even worried about themselves as fans. If brains are injured, it seems ironic for high schools and colleges to sponsor and celebrate the activity. I know a couple of people who won't watch anymore. Players are retiring as the likelihood of permanent brain injury becomes more and more evident. Baltimore Ravens center John Urschel had been playing and pursuing a Ph.D. in mathematics at MIT. It struck him, as well it might, that mathematics is clearer to an undamaged brain; he didn’t report to training camp this year.

There are many rationalizations: NFL players (though not college, high school or Arena League players) are well-paid to put their bodies and brains on the line. Nor are they coerced into doing so, as though they were Roman slaves in the Colosseum. On the other hand, many come from disadvantaged backgrounds. Almost 70 percent of NFL players are African-American. There are not necessarily many ways to rise, and I don't know how constrained people may actually feel to play, or how many options they have.

Now, whether or not it’s right to play football, or for a university to have a football program, another set of ethical questions arises with regard to those who watch it. One set of these questions is, as we might put it, turned inward: why am I watching this? Am I consuming other people's pain as entertainment? There’s a difference between watching simulated violence in a movie and watching real violence on a football field. On the other hand, I was also pretty glued to the set, watching people struggle through the waters of southeast Texas. Much television is a spectacle of suffering.

Let's say I concluded that the world would be a somewhat better place without football. Would it follow that it’s wrong for me to watch it? Why, exactly? I thought the world would be better without Harvey too, but I watched it anyway. Is it because I enjoy watching football in a way that I don't exactly enjoy watching a flooded city? How exactly does that make the situation or me worse? I ask that question in puzzlement, because I also have a funny feeling that it does.

These games will take place whether I watch them or not. Of course, if no one watched them, they wouldn’t be played. But I’m making moral decisions in this world, not in a hypothetical world in which everyone behaves as I do. My actual cash contribution to the NFL or the NCAA is minimal; it comes with my satellite subscription, more or less. Admittedly, I bought a Redskins cap a couple of years ago, but if I stop participating, it will go right on. How responsible am I, and why?

Football fandom raises many interesting questions about the relation of individual and collective responsibility, and also about the nature of moral reasoning. I can be the change I want to see, perhaps, and not watch at all. In the real world that will have precious little effect. But what if everyone thought like that? If everyone thought like me overall, we'd all be fucked, but also it’s not evident why I should worry about that. I live in a world in which people think exactly as they do, and I am asking about the actual effect of me watching the 'Bama game tonight on actual people in the actual world.

Well, it's pretty minimal. But I'd be lying if I said I didn't have misgivings about the whole thing. On the other hand, it's difficult to imagine America without football. Around this time of year, I always think about these things. Then I turn on the game.