For the Love of Mookie Betts

A fan’s lament over the Red Sox’s best player getting traded. 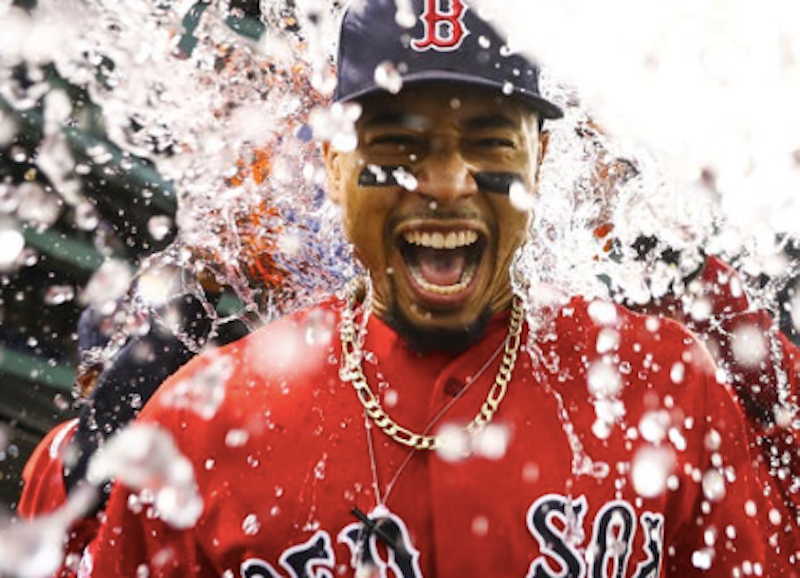 As of late last night, after reviewing Brusdar Graterol's medical info, the Red Sox are holding up the deal, likely insisting on more from the Dodgers.

Free agency. After six full years of major league baseball service time, a professional player is granted unrestricted free agency. Team control. For those fans that follow Major League Baseball through the front-office-based lens of roster construction, team control is everything. You draft and scout wisely. You find the gems, Mike Trout, Alex Bregman, Mookie Betts. You keep them. They’re cost-controlled for six full MLB years. Then they’re free to choose where they play.

Why would the Boston Red Sox trade their best player? In his prime? A player who’s universally beloved? Who has zero character issues? Money.

In September, Sox majority owner John Henry told local reporters, “This year we need to be under the CBT (Competitive Balance Tax—aka luxury tax). That is something we’ve known for more than a year now.”

Since October, rumors of dismantling swirled. Now that it’s finally happened, the 2020 Boston Red Sox will be without Betts and David Price, and the owners will save some money. I don’t care how much. You, as a baseball fan who follows the game of baseball, really shouldn’t care how much John Henry is saving either. He’ll be okay.

There are other advantages to getting under the tax, and it’s possible the Sox will spend big on free agency again next offseason. But for now, Boston fans have every right to be furious. One of the wealthiest franchises in baseball traded away their most productive, extremely well-liked, and homegrown star. Re-stocking the farm system is needed, but I don’t believe this was the only way to do it. Bloom will do that. In three years, the Sox will again be discussed in the prospect world.

You’ll hear about outfielder Alex Verdugo, attained from the Dodgers, and righty Brusdar Graterol, acquired from the Twins. Graterol’s velocity (regularly over 98 mph) and heavy sinking action, make him bullpen-ready now. If he can gain command, Graterol could turn into an every fifth-day featured attraction at Fenway. I look forward to seeing them both grow into above-average MLB players. The chance of either of them attaining Mookie’s level of dominance: .00001 (Calculations done using new proprietary algorithm I am not at liberty to share).

Sox fans want to believe every player adores playing in Boston. This isn’t true. The media in Boston is relentless. Talk radio fuels antagonism toward star athletes, not unlike the way right-wing media fuels antagonism toward Democrats. We’ll never know if Betts wanted to keep wearing the Red Sox uniform. I’m sure he’ll miss some of his teammates. I suppose you could argue that we’ll know if he wanted to stay in Boston when he signs a gigantic contract before the 2021 season begins, but come on.  The Sox just traded Betts, which alters the equation. Why didn’t the consensus second best player in baseball sign an extension with Boston? Why did he insist on testing the market in free-agency? It’s not that hard to see why.

No fan can accurately answer the hypothetical question: If you knew there was no limit on how much money you could earn in a free market of competing teams, would you sign for less than that? MLB has no maximum yearly salary. When you consider the length of Mike Trout’s recent contract (12 years) and the guaranteed dollars, Betts is awaiting the payday that will guarantee financial security for his family. Betts follows Bryce Harper, Gerrit Cole, Stephen Strasburg, Anthony Rendon and many others. He’ll be a free agent next winter. First, he’ll play one season in a Los Angeles Dodger uniform.

Betts was called up to the Red Sox in 2014. He played 52 games, logged 189 at-bats, made sparkling plays in the outfield, and as the Sox’s miserable season ended and they all sat out that October, he turned 22. Betts helped restore the Red Sox in 2016, as the club went on to win 93 games before falling to Cleveland in the Division Series

Betts’ 2016 season was MVP-worthy. He finished second in the majors in today’s standard all-around player value metric WAR (Wins Above Replacement). He won the MVP in 2018, putting up monstrous numbers. As always, he played sparkling defense in Fenway’s cavernous right field.

The Sox won 93 games again in 2017 as the young core of Betts, Andrew Benintendi and Xander Bogaerts complemented the aging (soon to be out of the lineup) Dustin Pedroia and Hanley Ramirez. Chris Sale came aboard and emerged as the ace the Red Sox had sought. Yet, the Red Sox again fell in October, this time to the soon-to-be-crowned Houston Astros. Thanks to Major League Baseball’s investigation we now know that those Astros benefitted from banging on trash cans and waiting for fastballs they knew were coming. MLB has yet to announce their findings from the 2018 Red Sox team that ended up dethroning those Astros.

The 2018 Sox won a franchise-record 108 games and tore through October, toppling the Yankees in four games; two one-run wins and one blowout. Next up, were the Astros. The Red Sox prevailed in five games thanks to Jackie Bradley Jr’s heroics (nine RBIs), Rafael Devers’ timely hitting (six RBIs), and a bullpen that rose to the occasion. Matt Barnes, Ryan Brasier, and Nathan Eovaldi were all dominant in the series. They needed everyone. David Price came through with two stabilizing starts. The World Series win over the Dodgers wasn’t as dramatic. With the exception of an 18-inning loss in Game 3, the Sox won comfortably. Steve Pearce played the unsuspecting World Series hero with three homers and a whopping 1.667 OPS. The season was complete.

Last year was a mess, so we’ll skip all that.

October is rarely representative of a player’s true value. Over time it does mean something, though. Over 99 career plate appearances in the postseason, Mookie Betts has batted .227/.313/.341 with one homer. He’s played very good defense, but his bat hasn’t been nearly as dangerous over that small, but not tiny, sample.

We think about October because there’s a magnifying element to those emotional-rollercoaster games. We might remember Pearce’s World Series homers and forget all the games missed in the summer due to injuries. We might remember Eovaldi rescuing the bullpen but forget about his spotty health history.

And yet, those October numbers mean infinitely less than Betts’ presence on the field, in the lineup and his performance over the last five years. That 162-game grind covers six months of the year. Betts’ smile is contagious. His camaraderie with teammates was palpable. His lightning-fast hands in the batter’s box. His contortions in the outfield, tracking down liners and long flies.

On those lazy July and August days this year, as the season wears on and injuries mount, fans might infrequently attend Fenway, as a form of protest. Players will be shut down. The Yankees might win 115 games. The standings will mean less to this year’s Red Sox. Chris Sale’s health remains a question. But then Brusdar Graterol will take the mound for his first start of the year… and we’ll watch, thinking Graterol will be a Red Sox, possibly a memorable one, for at least a few more years.