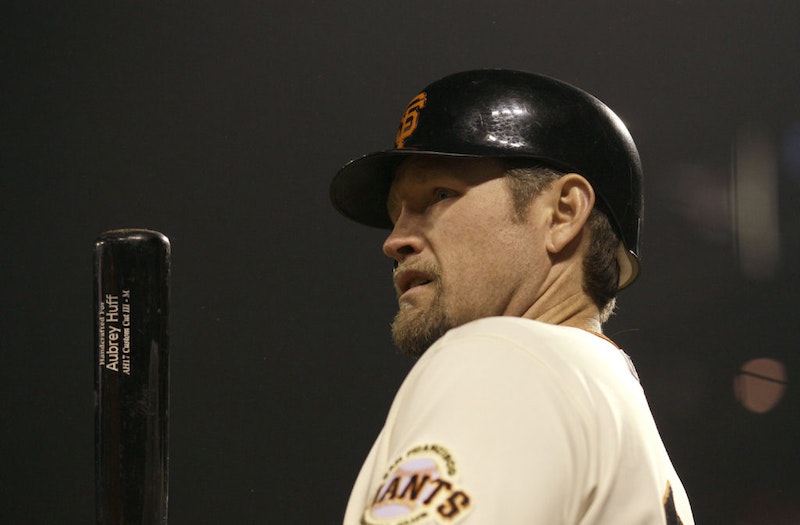 Ryan Moore wrote an article for the San Francisco Examiner criticizing the San Francisco Giants for telling Aubrey Huff, their former first baseman, that he's not welcome at their upcoming World Series anniversary celebration due to some of his posts on social media. "Instead of supporting free speech," Moore tweeted, "progressives label all opinions that differ from their own as hate speech." Huff tweeted, "Society is desperately trying to take away our 1st Amendment rights." Once again, we're reminded of the confusion that surrounds freedom of speech and the First Amendment. The former Giant exercised his First Amendment rights by suggesting, without incurring government intervention, that he was preparing to use guns against the government. The First Amendment, however, does not protect celebration party invitations.

In November, Huff tweeted, along with a photo of himself standing in front of a display of rifles,"Getting my boys trained up on how to use a gun in the unlikely event @BernieSanders beats @realDonaldTrump in 2020. In which case knowing how to effectively use a gun under socialism will be a must." This type of rhetoric, while legal, might get you disinvited from a party, or prompt a visit from social services. Right-wingers of the Ted Nugent variety boast like this amongst themselves, but Huff isn't smart enough to realize that social media's different. On Twitter, the braggadocio doesn't translate as if you're talking to your deer-hunting buddies over beers. Putting your children in the spotlight like that is also a poor decision, but it's typical for a rich half-wit whose 242 career home runs have granted him a platform.

Many of Huff's Trump-loving supporters, who were also mewling about free speech and the First Amendment, pointed out that Huff wasn't serious, but if a former baseball player had tweeted that he was training his kids to use guns in case Trump gets re-elected so he can't make himself a dictator, they'd have been screaming about Trump Derangement Syndrome. They might even have said that he shouldn't be invited to an important team event.

Prominent athletes should reconsider their decision to go on Twitter, but Huff's not much of a thinker. Another San Francisco athlete, Forty Niner Nick Bosa, got blasted when the team drafted him last year because of some mildly controversial tweets he'd made as a kid. Nothing he's ever gotten out of Twitter could come close to making up for what he had to deal with then, but he's savvier now. If Huff were capable of learning anything beyond how to "own the libs" on Twitter, the NFL Rookie of the Year could teach him a thing or two.

Huff, who's now retired after a 13-year MLB career, also criticized the Giants for hiring Alyssa Nakken, MLB's first female, full-time coach. He tweeted, "Couldn't imagine taking baseball instruction from an ex female softball player." The team took offense at that cheap shot, and rightly so. To let it go would show they don't stand up for their employees when they get maligned because of their identity. Referring to Iranian women, Huff tweeted, “Let’s get a flight over and kidnap about 10 each. We can bring them back here as they fan us and feed us grapes, amongst other things." Some felt Huff was referring to rape with "amongst other things," which isn't unreasonable. Huff, who's tweeted that a wife's job is "to serve her husband,” protested that he was joking about how grateful Iranian women would've been if they'd been "rescued" from their "shithole" country, but kidnapping is not rescuing.

The United States was built upon the principle of freedom of speech, which is the legal right to express your opinions freely without government interference. It's dismaying how many Americans think that it means people can say anything without incurring repercussions. But most Americans can't name a single Supreme Court justice. The Giants released a statement saying, "Aubrey has made multiple comments on social media that are unacceptable and run counter to the values of our organization." The team has no obligation to, as Ryan Moore put it, "support" freedom of speech. The First Amendment doesn't extend to the workplace. Huff's clueless defenders are saying the Giants are punishing him for his support for Trump, but that's not true. He went well beyond tweeting the usual #MAGA slogans.

Huff tweeted, after he heard the bad news, that he was disappointed that the Giants don't like Trump. He was either being ignorant or trying to deflect. A person of average intelligence would realize that a high-profile athlete "joking" on Twitter about preparing his children to shoot people, or making sex slaves out of kidnapped women, isn't a great idea.

Some Republicans today pass off awful words as "just a joke" because they have to make so many excuses for Trump's atrocious pronouncements. Aubrey Huff's a jackass who wants the same protection. His Twitter feed reads like a parody of a guy who's trying too hard to prove that he's the last "real man" on a planet full of cucks. He tweeted, "BJ is mandatory, sex is preferred," referring his requirements for a date. The divorced former athlete, who said he once put a gun to his head because of the depression that retiring from baseball has caused him, wants to be a Twitter shock jock without paying a price for it. He's not attuned to reality.

The San Francisco Giants franchise is valued at $3 billion. Its management doesn't want to put the brand at risk by associating with a toxic personality who "jokes" about kidnapping and raping women. They don't want to subject Alyssa Nakken to someone who's disparaged her for her gender—a person who might try to degrade her further at the anniversary celebration. Nobody knows what this guy will say.