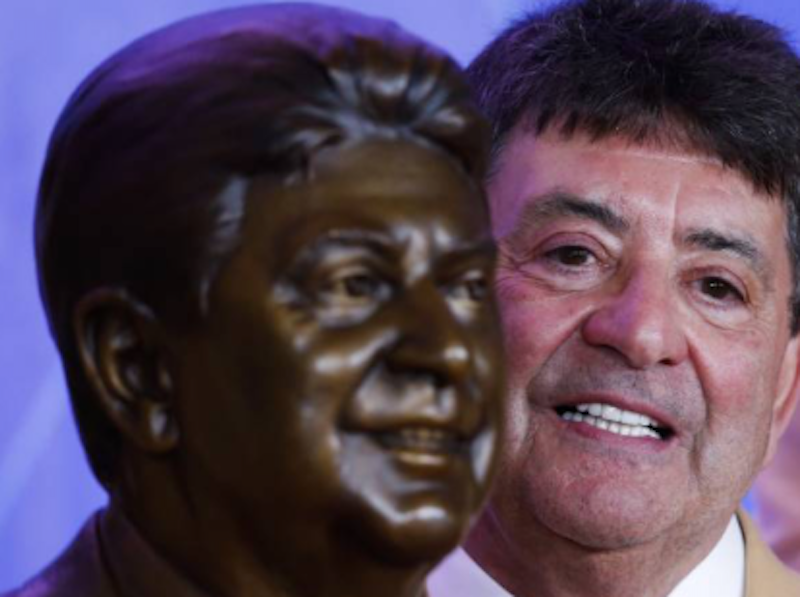 Eddie DeBartolo Jr., was on top of the world, but it all fell apart in 1997 with a single act of stupidity and avarice. The son of an Ohio real estate magnate enjoyed fabulous success as the owner of the San Francisco 49ers (five Super Bowl wins during his 23 years as an owner) in the Joe Montana/Jerry Rice era, and he was having a great time. But DeBartolo then gave Louisiana governor Edwin Edwards a suitcase containing $400,000 in hundreds in the parking lot of a San Francisco restaurant in exchange for a gambling license. The riverboat gambling business was a pay-to-play game in the Bayou State at the time, but DeBartolo ended up pleading guilty to a felony charge of failing to report a felony. The feds fined him $250,000 and gave him two years of probation. DeBartolo voluntarily handed the team over to his sister, Denise York.

Trump pardoned the man affectionately known as "Eddie D" last week, but the news got buried amidst the 10 other dispensations the President granted simultaneously. The once-famous sports owner hadn't been in the headlines for over 20 years, so few people under 35 had even heard of him. Former Illinois Gov. Rod Blagojevich's commutation got the bulk of the media attention. DeBartolo's not going to get his team back, but a stain has been removed from his record.

DeBartolo's sudden downfall was a huge disappointment to 49ers fans and players, and a shock to the sports world. The guy who’d taken such joy in his job threw it all away in a sleazy deal to get another job? Such behavior didn't seem consistent with his public image, although there had been hints that he was willing to skirt the rules. Eddie D had been known for having a big heart to go along with his big bank account. His employees were a part of his family, a lesson his father, a real estate tycoon in Ohio, had taught him. Former 49ers offensive lineman Randy Cross once said that he'd walk through fire for DeBartolo, which pretty much sums up the general sentiment among his players.

Under DeBartolo, the 49ers won 18 straight road games over a period spanning three seasons, setting an NFL record that may never be broken. The big part of that success story was the owner's willingness to shell out big bucks so his team could travel in style, which distinguished the 49ers from other teams. He flew them on wide-body planes that came with a chef. Players had their own hotel rooms. When one of them got injured in a road game and had to stay behind for treatment, DeBartolo would send his private jet to pick the player up when the time came. Every player in the league wanted to be one of Eddie's guys.

When the 24-year-old husband of a 49ers employee—a policeman—was shot dead on the job, DeBartolo immediately flew to California from his home in Tampa, Florida, arriving unannounced at her home at 4:30 a.m. He helped arrange dinners for the deceased's family all week, and sat for hours with the grieving parents. When safety Jeff Fuller severed nerves in his neck on the field and permanently lost the use of his right arm, DeBartolo arranged to pay him $100,000 a year for the rest of his life.

DeBartolo knew all the players' wives' and children's names. He'd greet his players as they entered the locker room after games while passing out towels to them. The way the Niners' owner took care of his football players—the salaries, the travel accommodations, the state-of-the art training facilities, the luxurious locker rooms—changed the NFL. Many believe the league created the salary cap because DeBartolo was paying players so much that league parity was threatened.

Lest you think Eddie DeBartolo, outside of his lapse of judgment in the parking lot, was a saint, some ground must be covered. His father purchased the team in 1977 and handed it over to "Little Eddie," who was 31. Edward DeBartolo Sr., who's from the mobbed-up town of Youngstown, Ohio, was dogged by rumors throughout his career that he had organized crime connections. The FBI linked him to mafia kingpins Meyer Lansky, Carlos Marcello and Santo Trafficante. Given the fact that he'd been handed so much (the 49ers are now worth $3.5 billion), all Little Eddie had to do was stay clean to emerge from the shadow of his father and continue his success. But his hubris brought him down.

Cocktail waitress Gina Baross accused the married DeBartolo of sexually assaulting her at a party at his Menlo Park condo in 1992. Although there was a detailed police report, DeBartolo was never charged. But he did pay Baross $200,000. In 1997, the diminutive DeBartolo threw a punch at a fan who taunted him about a loss to the Green Bay Packers. The NFL fined Eddie D for paying prohibited bonuses to players and for transferring ownership of the club to a subsidiary of the family corporation, violating rules against outside corporate ownership.

Eddie DeBartolo's character flaws are familiar to everyone. We've all seen what can happen when someone has too much handed to them. How do you understand what you have in owning the 49ers when you got the team as a present? Nobody who'd bought a team by working their way to the top, as Dallas Cowboys owner Jerry Jones did, would’ve met a crooked politician with a suitcase full of cash in a parking lot. There're a number of ways of looking at what happened. From one angle, DeBartolo was the victim of extortion, and from another he contributed to the continued corruption of the Louisiana gambling industry. It was an act of self-destruction and a disservice to his team.

Whatever you say about Eddie DeBartolo, a major contributor to charities, he's done a lot for plenty of people. If Trump pardoned him to win Ohio in November, that's not great. But he'd already paid back his debt to society, so I'm happy he doesn't have to die a felon. In a perfect world, DeBartolo would now lend some major financial support to criminal justice reform.