Women's sports are just like Men's, only easier and less dangerous. No wonder they're not taken as seriously. 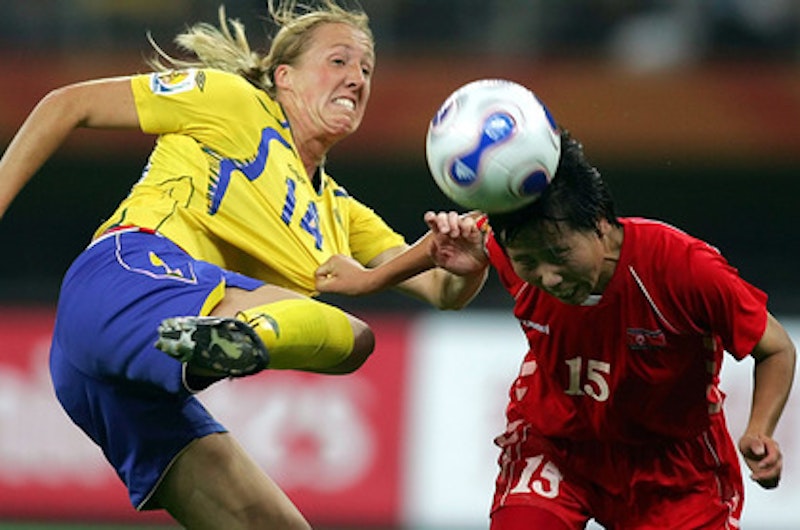 I'm a big sports fan. Huge. College football's pretty much my bread and butter, but I don't really discriminate. I have no problem sitting through nine innings of a particularly slow baseball game and get intensely excited for both the NBA and NHL playoffs. I like those strong man competitions where huge Scandinavian dudes pull semi-trucks or bench-press tanks. And there's this commercial I saw once where some guy is standing on a soccer pitch with what looks like a lacrosse ball and a field hockey stick. He flips the ball into the air and uses the stick like a bat to send it flying into a goal. What the hell is that sport and why don't they show it on ESPN?

I admit though, that despite my self-declared feminism and indiscriminate taste for basically every sport but NASCAR, I don't really watch women's sports. Women's tennis I like, and I'm definitely a fan of women's soccer, but others like basketball, lacrosse and even softball I could pretty much do without. It's not that these women aren't incredible athletes; they certainly deserve respect and viewership. It's just that these particular women's sports are such dumbed-down versions of their male counterparts—pared down and simplified for the "gentler" sex.

Take basketball: some of those women are truly amazing athletes, and when they start raining threes, I'm definitely impressed. That's until I remember that the while the ball is lighter and smaller than in men's basketball (necessary because women's hands are smaller and their arms weaker), the hoop is still the same size. Female basketball players are throwing a smaller ball into the same size hole.

The difference between men's and women's lacrosse is even more egregious. Proponents of women's lacrosse argue that impressive stick handling skills make the game. While their pockets are much smaller and some female players cradle the ball fantastically, I've watched a lot of lacrosse games and male players' stick handling is just as impressive and that's while getting mercilessly whacked by opponents as they head up the field. In women's lacrosse, players don't even wear pads or helmets. In men's, pretty much the only thing you can't do is push someone in the back or slash them in the head.

Even softball pales in comparison to its counterpart baseball. The games last just seven innings and the size and density of the ball greatly decrease opportunities for amazing home runs or intense fielding plays. It can happen, but it's pretty rare and to make anything more than a short highlight reel on SportsCenter, a home run has to be accompanied by a player being carried around the bases by the opposing team after she possibly tore her ACL.

There's nothing wrong with women's sports as a concept. I played sports for the better part of my life—soccer and softball. I know how strong and competitive women can be and I'd love to have a women's sports team that I could follow intently. What bothers me as a fan of sports and a fan of women is that there's no reason for women to play alternative, lamer versions of male sports. Men compete against men and women compete against women—why those competitions are different, I can't understand. There's no reason why female basketball players can't shoot a proportionally smaller ball into a proportionally smaller hoop, or why women don't have the option to play hardball rather than be relegated to softball as soon as they're old enough to put away the tee. And while I would never recommend that female lacrosse players go up against men in what's a fairly violent and brutal game, they ought to be able to play against other women in the same aggressive manner, with the same physical intensity. As long as women are playing the same basic sport but with a lower degree of difficulty and required skill, they'll never earn the respect they deserve as athletes. Their competitions will never get the same attention, never be as closely followed, as widely watched. They'll always just be women's sports, second fiddle in a field meant for men.

The one real exception to this rule seems to be soccer—a sport where American women's teams are consistently successful, and exceedingly more popular than the men's. There are no differences in the style of game either. The rules are the same, the ball is the same and the physicality and aggression of the game is fairly equal for both genders. Women's soccer is not more popular because their teams have better athletes or significantly more skilled players than men's teams, but because, in the United States, the sport has been largely feminized. If women can play the same game as well as, or even better than men, then it must be an easy sport, a girlie sport, a game for men who are too small or weak to play football. In the rest of the world—certainly Europe, most of South American and increasingly in Africa and Asia—soccer (or football as it is called) is the dominate sport, the sport of the masses. But more than that, it is the sport of men—a game deemed too aggressive, dangerous and masculine for women. Why then in the United States do we consider it a women's sport? If it is too brutal a game in the rest of the world—carrying with it class, race and religious animosities—that women are often ridiculed for trying to play, how did it become so weak and pathetic in the U.S. that male players are the ones that we admonish?

That's easy. It's because there's no alternate version, no simplified, substandard variant that women must play instead. In the U.S., soccer could be an equalizer, a sort of antithesis to the inequality of our "major" sports. But instead we call it a girls' sport and resolve that our lack of successful men's teams and super-human world dominance is simply because the sport doesn't matter—real men spend their time playing something else. It wouldn't be this way if there wasn't a precedent. Soccer wouldn't be a women's sport if so many other sports weren't gender disparate. What I'd like to see is all sports played equally across genders, in the same manner, with the same rules. But that's not likely to happen. So instead, as a more realistic alternative, I'd like to watch more women's sports and support more female athletes. I'd like SportsCenter to show more highlights and make up stupid catch-phrases and one-liners when women athletes do something that's really cool.