It would be a shame to ban one of America's great cultural pastimes, but something needs to be done so horse racing is safer for the real athletes. 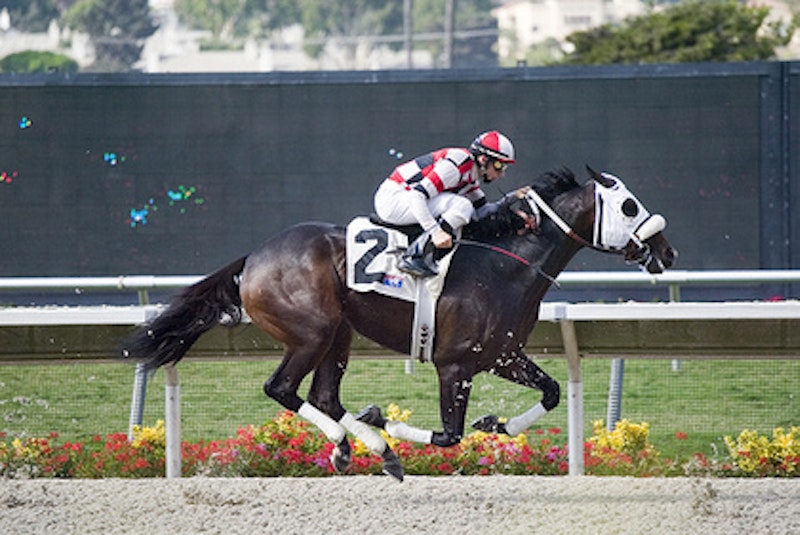 I've always loved horses. I love the way they look and smell, the sound of their hooves on gravel and the moistness of their breath on my hand after a workout. I started riding when I was about nine and horses soon turned into my main hobby. I went to horse camp in the summer, joined 4-H, competed in shows, and leased my own Roman-nosed Quarter Horse, Buster Brown.

My sister and I would wake up early on weekdays to catch the daily races broadcast on local stations of the nearby racetracks. Between Laurel and Pimlico (both in Maryland), there were about 10 races a day and we would choose the horse whose name we liked most and cheer them on from our positions on the floor in our family room. I loved to watch them run, the block colors of the jockey silks flailing madly atop those vital creatures.

My favorite film was National Velvet, which featured Elizabeth Taylor as a teenaged girl who disguised herself as a man to enter her horse in a steeplechase. When by age 12 I had already grown too tall to ever weigh-in as a jockey, I set my sights on obtaining the thankless yet crucial position of warm-up rider.

Yet in the past couple of years I've begun to realize that there’s a darker side to the traditionally classy “Sport of Kings” that the young adult Thoroughbred book series didn't cover. Horse racing is, at worst, animal cruelty. Forcing a horse to run at high speeds in a competitive way is against the animal’s natural inclinations. Wild horses do run and romp and play, but you’ll never see them actually racing each other.

It is true that horses need exercise, but the horses themselves can work out any restlessness or pent-up energy. And I am a firm believer that establishing a working relationship with a human is emotionally beneficial to a horse. Being trained to accept a saddle and bridle, to learn a rider’s smell, voice, and dozens of tactile commands is an enriching experience for animals and creates a special bond that increases their quality of life.

But it’s the extreme conditions of thoroughbred racing that are harmful to the horses. In recent years these tragedies appear to be happening more, or in any case are more prominent in the public eye. The Barbaro incident in particular spurred many debates about this topic as the country watched the year-long saga unfold and end in the euthanization of the animal. More recently, the demise of Eight Belles got me thinking more and more that something is wrong.

Horse racing is a multi-million dollar business, and when that much money is on the line, risks are inevitably taken that sacrifice the animal's health. With a $5 million bonus to the horse owner that wins all three legs of the cup, entering the Triple Crown races is far from a labor of love. The inside world of racing is just as corrupt as any other sport, with weight cheating, performance enhancing drugs, and dirty money being exchanged. The difference, of course, is that this sport’s athletes receive no salary. Absolutely nothing is in it for the horse. Sure the animals will retire to lush pastures where over-eager stable hands not unlike my prepubescent self will mollycoddle them with soft bristle brushes and sugar cubes, but their main purpose as soon as that prize check is cashed will be to reproduce.

When the facts are laid out, it is pretty clear that horse racing is outdated and, in fact, immoral. The premise of using animals for sport and entertainment is disturbingly similar to ancient Roman Coliseum spectacles which presented primitive Man vs. Beast face-offs among other animal fights and hunts. Exploiting a living thing for profit is undeniably unethical.

But there is no easy solution to this, nor am I sure I even want one. The legal process to outlaw the racing of horses would take decades to set into motion. The number of people who believe it even should be outlawed are an insignificant minority to those who still love the sport, and with politics and big business in the middle of it, it doesn’t help that those with money (horse racing tycoons) have more power over those without (the activists likely to fight for this cause).

Beyond the legal issues I have my own reservations about completely boycotting thoroughbred racing. There’s something to be said for donning a large hat and sipping bloody marys on a Sunday afternoon in May at the track. The music, the crowds, the blanket of roses are all saturated with tradition and are staples of American leisure.  Horse racing crosses boundaries of social class to include the affluent binocular peepers and the less wealthy gamblers in need of a quick fix. Banning the sport would put an enormous amount of people out of business and give developers even more encouragement to bulldoze the derelict stadiums and erect strip malls.

The last thing I want is to buy my vanilla soy no-whip frappuccino on the same ground where Secretariat pounded down the homestretch at the Belmont Stakes and made history. Nevertheless, while it would be hard to imagine the equestrian world without these prestigious and time-honored races, when the dignity and mortality of a defenseless animal is on the line, we should leave the racing to humans and cars.