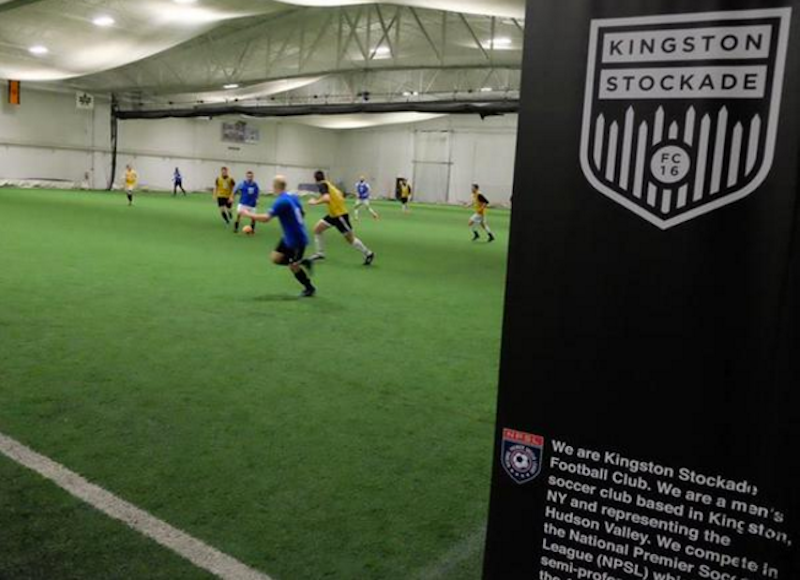 This past weekend in Ulster County, which still has plenty of cheap warehouse space available, artisanal soccer was served instead of artisanal food and drink. Kingston Stockade Football Club, already two away matches into its inaugural season in the National Premier Soccer League, played its first home games on back-to-back afternoons, winning both contests and sending their nascent fan base home happy and quite sober. That’s because the team plays its games in a 67-year-old high school football stadium where no alcohol is permitted. And when the game’s over, a classic old-guy janitor dude pushes a shopping cart around to collect the corner flags. The venue is called Dietz Stadium, and it’s a forgettable pile of bricks sandwiched between a bus terminal and snowplow storage lot not far from a major sinkhole and a dental office that’s the center of a spectacular murder trial in which a doctor is accused of poisoning his lover’s husband in the parking lot of local gym. Never a dull moment in Kingston, especially now that it has a winning soccer team.

And for that fans can thank Foursquare founder Dennis Crowley, who has a second home in nearby Marbletown and put up the dough for the franchise and has done everything right so far. They hired the requisite high-end bespectacled logo designer who of course fled the Lower East Side of Manhattan for the Catskills and then hit the ball out of the park with a brilliant crest design for the club. Crowley then hired a local legendary college soccer coach to helm the squad, and the coach then filled the roster with star and still-fit alumni from various Hudson Valley colleges with an Englishman thrown in for good mix. Stockade ownership even went all out with a brilliant uniform design and rolled it out with classy public events and public relations savvy. The club is called Stockade FC bowing to Kingston’s Old Dutch history when the settlers from Holland built stockade fences to protect their own, back when the city was called Wiltwyck, until the British started making noise up and down the Hudson River and renamed it Kingston in 1669. The orange highlights in the Stockade FC uniforms are a nod to the Dutch and may or may not be responsible for the Netherlands national team failing to qualify for this summer’s UEFA European Championship tournament in France.

Stockade FC plays in the amateur status NPSL, which had 85 teams toiling in four regions and 13 conferences across the country. The New York Cosmos B squad based out on Long Island is the reigning league champions and shares the same Northeast Region Atlantic Conference with Stockade FC and seven other teams, including the Rhode Island Reds, who visited Kingston for the first home game. The Providence-based squad is in its fifth season in the league and of course showed up wearing blue, white and yellow kits, just to throw everyone off. For a jittery 70 minutes there was no score at Dietz Stadium, and the soccer fans could hear local rednecks dusting off the “there’s not enough scoring in soccer” speech that is heard ad infinitum from NFL-fueled maniacs. Finally, in the 73rd minute a kid from New Paltz, NY, who played college soccer at SUNY Cortland and came into the game as a substitute just minutes earlier, nodded home a corner kick to put Kingston up 1-0. They had been threatening the entire game, with Matt Kaziol lofting endless corner kicks into the box but to no avail. Baum’s header barely passed over the goal line and an astute linesman made the call. It was a half-celebration, but still, Stockade FC was on the board and had the lead with only 16 minutes to play. With a raft of very active drummers from the Percussion Orchestra of Kingston (POOK), the atmosphere was almost at Major League Soccer-levels and very tribal at times. Many new fans didn’t know how to react to the semi-constant drumming, but after awhile the crowd warmed up to it and the percussionists would prove to be an invaluable asset to a weekend of semi-pro soccer in a forgotten part of Kingston.

There were no cops and tons of kids in soccer uniforms racing about Dietz Stadium and taking the field during halftime for mini games. There the young ones experienced the only way Americans can ruin a perfect game such as soccer. It’s supposed to be played on grass. Dietz Stadium is FieldTurf, which means nothing but bouncing balls for 90 minutes of ping-pong headers and players looking up and judging descending arcs like they were Andrew McCutchen manning center field. The Dietz pitch is also cursed with lacrosse markings and maybe even some hopscotch triangles and of course the dominant American football gridiron with its thick sideline stripes confusing those looking for the traditional touch line. Early MLS games in the mid-1990s such as the MetroStars at Giants Stadium suffered from the same bounce-happy terrain further diminishing the already-limited skills of the on-field personnel. At least the MetroStars didn’t have football uprights directly above their goal posts, which at Dietz Stadium makes for a lot of white pipe to look at every time someone takes a shot.

Stockade players didn’t seem to notice what was beneath their feet or hovering over their goal. They played both weekend games at a break-neck pace and with guts and determination. Their efforts were applauded by receptive crowds of close to 900 on each afternoon in a “stadium” that holds 1,500. Sunday’s win was over Greater Lowell United FC, whom they’d tied 1-1 during their first game of the season on the road. Kingston scored three rousing goals that were the direct opposite of Baum’s line-hugger the day before. Koziol, a Poughkeepsie native who went to RPI and was the corner kick yeoman on Saturday, opened Sunday scoring with a free kick just under the crossbar that surprised just about everyone. Englishman Michael Creswick connected on a nice strike after some crafty passing in the box by Kingston, and another Poughkeepsie guy Corey Phillips tagged an absolute ripper into the net from 12 yards out to put Lowell into a trough they would never escape.

There were Kingston police at the second home game, and even more little soccer shavers racing up and down the aisles at Dietz. The POOK stick-wielders had grown in number and were doing nuanced drum rolls during corner kicks and dictated the atmosphere which might have otherwise been lost to traffic noise from the nearby New York State Thruway. I thought Stockade FC might have been tired from the Saturday super-effort it took to beat Rhode Island. Instead their shots on goal seemed a bit more laser-like and frequent in what was a much more entertaining match as the players wearing home whites quickly found their stride.

During the halftime break I had a chance to say hello to Stockade FC head coach George Vizvary. He’s the Jim Leyland of college soccer coaches, with a resume that stretches back to the 1958 Hungarian national team. He’s got a certain classy demeanor oozing from his hunched gait and measured movements. The man has lived and breathed the game for more than half a century and actually played competitive soccer as a player at Dietz Stadium back in 1957 with the Kingston Sport Club. His 80 years include a surreal single season as head coach of the short-lived New York Centaurs on Randall’s Island. It’s safe to say he has probably seen every sad condition of U.S. soccer pitches across the great northeast, where he helmed SUNY Ulster and won more than 530 victories as a junior college coach. I asked him what he thought of playing on FieldTurf at Dietz, with the ball in the air all the time. He backed away smiling. Palms up, eyes gleaming. “It is…” he said, trailing off toward the metal bench where his English player awaited his start in the second half against Lowell, “what it is.” It was then I realized Vizvary had been coaching teams on the hard turf for decades now, and was probably just glad to be up 3-0 at halftime, comfortable with a new team in an old city. The good news is Kingston is 2-1-1 and tied for second in the conference. The bad news is they only have six home games remaining.