The “Field of Dreams” game was a smart gimmick, but a real impact on MLB would be the lowly Baltimore Orioles converting to an all-black team. 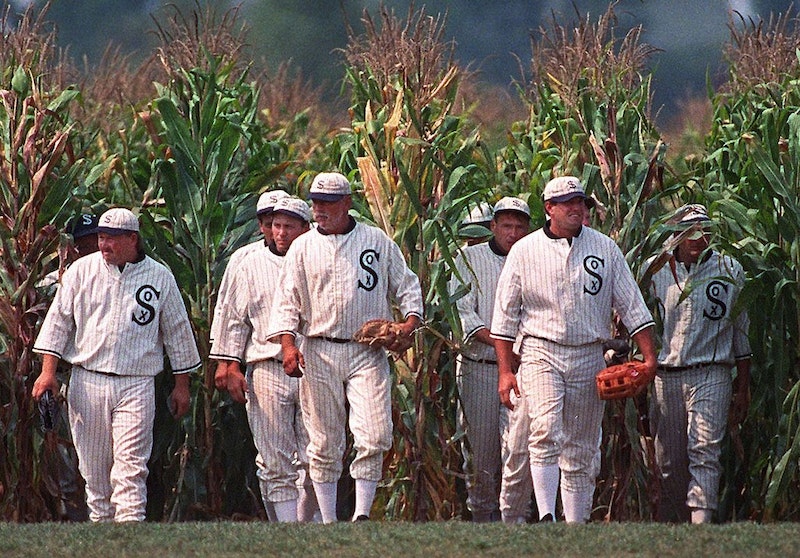 It took nearly a week, but I’m now cleansed from the predictable—but still flabbergasting—reaction to the “Field of Dreams” game played on August 12th in Iowa. “This might just save baseball,” was a common sentiment on social media, and I have to ask, “Save it from what?” Granted, the sport has changed, evolved really, from the gauzy days of yore, and I’m not pleased by the weak MLB Commissioner Rob Manfred—who, giving into political pressure, screwed workers in Atlanta by moving this year’s All-Star Game to Denver, and was complicit in the Softball League-style seven-inning doubleheaders and the more popular (not to me) automatic runner on second base in extra-inning games—or the rapacious Players Union, led by Tony Clark, who are threatening a work stoppage for 2022 if certain conditions aren’t met by MLB’s owners. I don’t like unions in general—busting the Teachers and Police unions would be an enormous benefit to the country—but it’s not as if Mike Trout, Joey Votto, Clayton Kershaw and Giancarlo Stanton are making peanuts. And the lesser-known players who are pulling down “only” $1.5 million don’t have much in common with factory or healthcare workers.

The game last week was a smart marketing gimmick, and ratings bonanza for FOX, and I did watch the contest, if only because I have an interest, as a Red Sox fan, in seeing the Yankees lose, which they did, a most pleasing outcome (a NYY loss is the equivalent of the “businessman’s high”). Had the cornfields hosted the White Sox and Detroit Tigers, I would’ve tuned in for a couple of innings, like I do for each year’s All-Star exhibition, and then changed the channel. There’s only so much Joe Buck and John Smoltz I can tolerate—like the players, costumed in “throwback” duds—and the non-stop, and lavish, praise of the movie Field of Dreams, which inspired this game, was horrifying. That 1987 film, in my opinion the worst baseball movie ever made (my favorite is John Sayles’ Eight Men Out), is as corny as the newsboy cap Smoltz wore on-air, and its star, Kevin Costner, was unwatchable. (Even worse than his turn as Jim Garrison in Oliver Stone’s very muddled JFK.) Costner, naturally, was the honored guest of FOX and if any actor could be more saccharine in recalling a film he or she made, I haven’t witnessed it.

Boston Globe columnist Tara Sullivan was representative of the media’s gushing about the entire production, and cited “analytics-fueled” games as a major MLB “problem,” which is not only stupid, but also flies in the face of the revered movie Moneyball (I liked it a lot, giving Brad Pitt and Jonah Hill perhaps their career roles) about Billy Beane, the Oakland A’s president/general manager, who pioneered the use of… analytics.

Sullivan: “[The game] worked because of the ongoing resonance of a baseball movie that isn’t really about baseball at all, but about relationships. Between a father and son, between dreams realized and unrealized, between the past and the present and what gets us from one to the other. [You figure that sentence out; I’m still gagging after typing it.] As Costner reminded viewers during the broadcast, when he sat with both the pregame and in-game TV crews, “Field of Dreams” has no car crashes or exploding buildings, no steamy sex scenes or love triangles. The climax is a son asking his dad if he wants ‘to have a catch.’”

That line, Buck, Smoltz and Costner told us, made men weep. Paraphrasing gossip columnist Cindy Adams, Only in Iowa, kids, only in Iowa.

My father, a stoic but gentle New Englander, wasn’t much of an athlete, but with enough goading he’d toss the ball around for 15 minutes or so with me when I was young and that’s a good memory. But do I cry thinking about it? Not at all: I smile, and think about other things we did together when he wasn’t working at his car wash, like sitting side-by-side at the local library in Huntington, New York, or the summertime “dips” we’d take at one of the five public beaches close to our house. Or the once-a-year excursions to either Shea or Yankee Stadium; at that point, in the early- and mid-1960s, baseball games bored him, but he knew the excitement it gave me, and my four older brothers in earlier years.

Last weekend, I asked my younger son Booker if he got misty-eyed remembering the hours we played baseball in the backyard here in Baltimore (and earlier in New York City, at Stuyvesant School’s sports field, along with his brother Nicky) and he almost laughed me out of the house. “Dad, that was a lot of fun; we did a lot of fun things. Since when does fun make you cry?” I ranted a little about the “Field of Dreams” game and he cut me off: “Obviously, I agree. No further conversation necessary.”

But we talk about baseball a lot, and while watching the Red Sox vs. the Orioles last weekend, he came up with what I believe is a brilliant idea for the sport. The Orioles are a nowhere franchise, with a nowhere “rebuild” and a nowhere ownership. Almost no one attends their games at the splendid Camden Yards. It’s rumored that the team’s owners, the Angelos family, might sell the team; if that occurs, and the buyers aren’t local, it’s likely the franchise will move to a “better” market, say Las Vegas, Nashville or Portland. That’d be a nightmare for Baltimore, an old-fashioned sports town, terrible not only for the local retailers, restaurants and bars that count on tourists, but the city’s spirit as well.

Anyway, the idea—far, far more significant than the now-annual “Field of Dreams” game—would be for the Orioles to overhaul their roster, both at the Major and Minor League level, and employ only black players (with several Hispanics to fill in the gaps), coaches and front-office personnel. It’s a real problem in MLB currently, with only eight percent of the game’s athletes being African-Americans; a drastic move like this could encourage teen athletes—who can choose football or basketball instead of baseball—to change course. Baltimore’s a majority-black city, although you wouldn’t know that by looking at the sparse crowds at Camden Yards. Fielding an all-POC team would not only excite the city, and MLB in general, but would certainly draw much bigger crowds, not only black residents, but also liberal whites who’d want to show solidarity. Almost instantly, the Baltimore Orioles would become “America’s Team.” A friend said, “Sure, for half of America,” which is true, but nicknames stick, and it’s not as if the Dallas Cowboys, which once held that moniker, were universally loved by NFL fans.

Additionally, it’s not a stretch for foresee top high school and collegiate black athletes (and perhaps MLB free agents as well) thinking, “I want to play for Baltimore.” It’s important to note that the notion of this idea isn’t to put Baltimore in a corner, but rather start a movement that would benefit all of baseball, with other franchises taking a hard look at some of the racism in the game.