The summer is slipping away, but maybe the Red Sox won’t completely collapse. 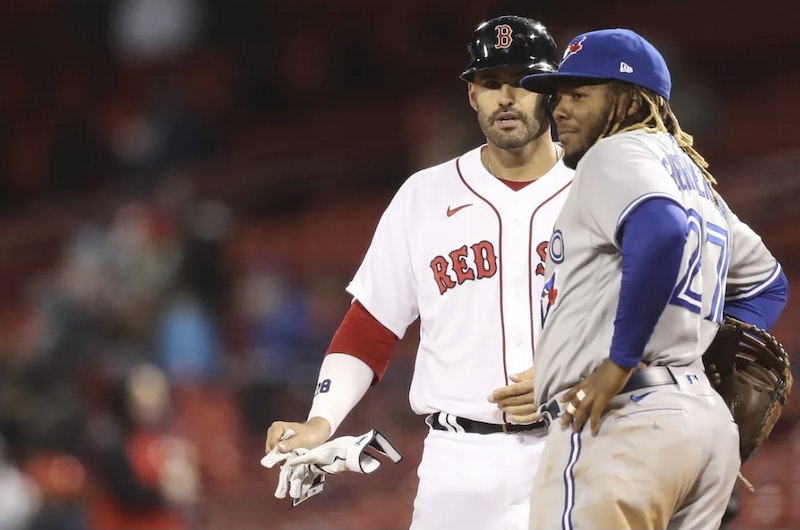 The baseball season is six months long. A game nearly every day. By this point in the season, about 45 games remain. Though each game counts evenly in the standings, each game doesn't appear equally meaningful to the fans, the players, or the managers. The season's first 20 games always feel important because first impressions set expectations. When a runner starts a marathon at the back of the pack, none of the commentators mention that runner again until they make their way toward the front. The Toronto Blue Jays and New York Yankees have recently begun to make their way toward the front, closing in on the Sox and Tampa Bay Rays.

Going back to the start of the season-long race, the Red Sox were expected by Vegas and by MLB pundits to win about 80-85 games. Here we are approaching mid-August and until a few weeks ago, they were on a 100-win pace. That's now slipped to around 92. One might think Red Sox Nation would be feeling good about this season's success. Despite the four World Series titles in the last two decades (2004, 2007, 2013, and 2018) any Red Sox fan over the age of 40 grew up with the general expectation that things were likely to fall apart for the Sox.

It takes some reminding not to mentally retreat to that hardwiring based in childhood fandom traumas like the World Series debacle against the Mets in 1986. For my formative years (ages eight-19) the Red Sox October struggles were continually tragic. Their cumulative postseason records during the seasons of 1988, 1990, 1995, 1998 and 1999: 2 wins and 18 losses.

Since the end of July, the unexpected 2021 Red Sox resurgence has disappeared. The Sox are playing badly and their postseason odds have shrunk. The offense has dried up like a raisin in the California sun.

We drove back through California's Central Valley and 105 degree heat on Sunday. Listened to the Sox on the radio as they slugged it out with the Jays. We were returning to the Bay Area from Ojai, a little artsy town tucked into the mountains 45 minutes east of Santa Barbara. Brought the whole pack: the two of us celebrating 10 years of marriage, our two Keeshonds, the elder having just turned 12, and our four-year-old who got to meet a gentle horse one morning, who angled his head over the fence and offered his nose to her little outstretched hand. She's obsessed with My Little Pony and a show called Spirit, so the horse ranch next door to the rental guest house was a bonus.

It'd been nearly two years since we'd gone away together. Don't we all take travel for granted until we can't go anywhere? As we headed north, the dogs dozed in the front, positioned strategically in front of the dashboard fans and the air-conditioning. I drive on with a foggy brain, after a difficult night of sleep. Maybe I didn’t want the vacation to end. We’d just settled in after the long drive Wednesday. Saw the ocean in Santa Barbara. I never sleep all that well when I'm not at home. I chewed some caffeine gum and drank more water as we cruised past the 18-wheelers carrying what must’ve been one full ton of garlic. Later, another truck was filled with thousands of red potatoes. I-5 can turn into a two-lane Autobahn. An early afternoon on a Sunday, the Fast and Furious wannabes were mostly absent. Every few miles, a car would zoom past the line of sedans and SUVs. Cars passing on the right because only two lanes exist. Then they'd see yet another 18-wheeler up ahead and hit the brakes, swerving back into the left. Humans are incredibly stubborn. All of these unvaccinated, unnecessary deaths. All of these drivers who can't slow down to enjoy the 80 mph flow of left-lane traffic.

The Sox had pulled ahead early in the final game of this critical four-game series with the Jays, after dropping 2 of the first 3. Leading 7-2 in the fourth, the radio guys were relieved the bats had finally woken up after a two-week slumber. Each hit carried a sense of relief.

Since Jays outfielder George Springer returned from injury in July, he's hit 11 homers in 32 games. Meanwhile, Vlad Guerrero Jr. is leading the majors in OPS, a stat which the team leads all 29 other clubs in as well. Sure enough, the Jays got two runs in the fifth on a Guerrero homer, closing it to 7-4. We drove on. The mile markers to Sacramento and San Francisco slowly decreasing. A full tank of gas before we hopped on I-5 would be just enough, just 295 more. Down to 252. Now down to 219. JoJo the Keeshond out cold on the floor. Boumie the elder Keeshond didn't have enough room to lie down in the passenger seat. He finally took to resting his head on the middle console.

Eight-four as the game continued in the bottom of the seventh. Despite amassing 15 hits, Will Fleming, doing the play-by-play instead of Joe Castiglione, was clearly afraid of reliever Hiroki Sawamura having to face the top of the Jays order. Sawamura threw fastballs nowhere near the strike zone. Springer walked on four pitches. Something was wrong with Sawamura’s hip. He left the game with a 3-0 count, having thrown two wild pitches that brought Springer to third. On came Adam Ottavino, who I call October Wine. Ottavino can't hold a runner on base. Anyone and everyone steals off of him. Marcus Semien hits a sac fly to center. Eight-five. Guerrero steals second. Only one out. Teoscar Hernandez singles home Vladdy. Lead down to two, 8-6. To hear Will Fleming's description of this game and the shrinking lead, the season seems to be slipping away. I suppose Fleming aims to capture the listener by amping up the drama. But thelosing has been dramatic. Some games are more important than others. Only 194 miles left.

Adam October Wine manages to use the Jays aggression against them. Is it Jujitsu where you take the opponent energy and attack by defending? After Corey Dickerson steals second, he takes a big lead and gets picked off to end the threat. Eight-six as wemove to the eighth and headed home.

I'd like to say the Sox hung on and won the game as we exited I-5 and drove west toward El Cerrito. Instead, closer Matt Barnes gave up a three-run, soul-crushing homer to Springer in the eighth and the Sox lost another one.

We finally pulled into the driveway and parked. Everyone needed to use the bathroom. Home again at last. The four-year-old headed right up to her room for some down time. The electricity had been out all day and wasn't expected back until the morning. No Internet. No hot water until electricity was restored. But it didn't matter. We were back home. The Sox season wasn't over yet. The team that leads the majors in comeback wins. Another six weeks of heart-breakers and comebacks to appreciate. October will come when it comes because baseball is baseball and time is time and let's just appreciate the Red Sox won the World Series not once but four times in the last 18 years and nothing is slipping away right now except for the summer.