Yankees and White Sox in the Field of Dreams

The players for both teams will be wearing “throwback” uniforms, but we don’t know if they’ll emerge from the corn like Ray Kinsella’s movie hardballers. 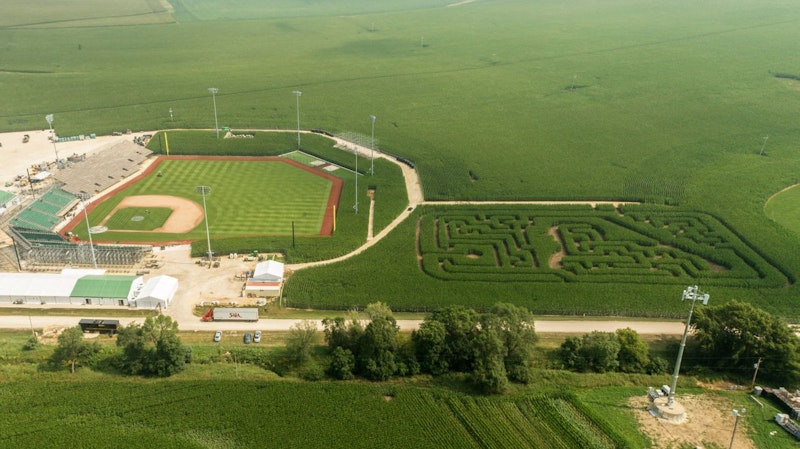 Iowa is well-known for two collegiate football organizations, the University of Iowa, and Iowa State University. The Hawkeyes and the Cyclones draw thousands to their respective home games each fall. This week, big time sports in Iowa takes a different turn.

Major League Baseball comes to Iowa for the first time. The Field of Dreams game, on the minds of MLB execs for five years, is scheduled for Thursday night at seven p.m. EST. The FOX network pregame show starts at six.

Field of Dreams, the movie based on W.P. Kinsella’s book Shoeless Joe, made thousands of baseball fans call their fathers after leaving the movie theater in April of 1989. Kevin Costner’s plaintive, “Hey, Dad, wanna have a catch?” line choked up plenty of tough guys, myself included. (I’m not a tough guy.). The baseball field from the movie site still attracts thousands of visitors each year. The guest book was signed by a family from Saporo on the day my family threw some grounders on the famous diamond.

The game on Thursday will be played on a newly-constructed edifice, modeled in some ways after old Comiskey Park in Chicago. Bullpens are located beyond a wooden center field fence, like Comiskey was once configured. There are only 20 rows of seats, and an extra deck for the press. The seats are colored green cyan, a traditional color used in old ballparks. Distances to points from home plate to the outfield walls are very close to the same as Comiskey.

Shoeless Joe Jackson was a White Sox outfielder, and the current Sox will play the New York Yankees. The teams aren’r playing on the actual Field of Dreams, but a few rows of corn away, where 8000 lucky fans will get to see Jose Abreu up close. Tickets on the secondary market are going for over $1200.

Fans of the movie will remember Burt Lancaster as Dr. Archibald “Moonlight” Graham—who managed to play in the majors, in one game, but without getting an at bat. Moonlight made his own decision to pursue a medical career, but more often, baseball hopefuls are shut down by an injury, or flat lack of talent. Jeff Banister suffered more injuries than many athletes, including a home plate collision in college that caused paralysis for over a week.

Banister played college ball in Houston, and then started a pro career with the Pittsburgh Pirates. Like Doc Graham, Banister appeared in only one major league game. In the movie, Rookie Graham gets his long-hoped for at-bat, and pokes a sac fly to score a run for his team. Banister, in his only at bat, singled. He didn’t score, but later retired with the pristine 1.000 batting average. He managed the Texas Rangers for more than 600 games from 2015-2018. There’s no evidence his players called him either “Doc” or “Moonlight.”

The players for both teams will be wearing “throwback” uniforms, but we don’t know if they’ll emerge from the corn like Ray Kinsella’s movie hardballers. It seems like there’s only one good reason why they’ve made a portion of the right field fence moveable.