Naomi Osaka shed tears in Cincy that made her strong. 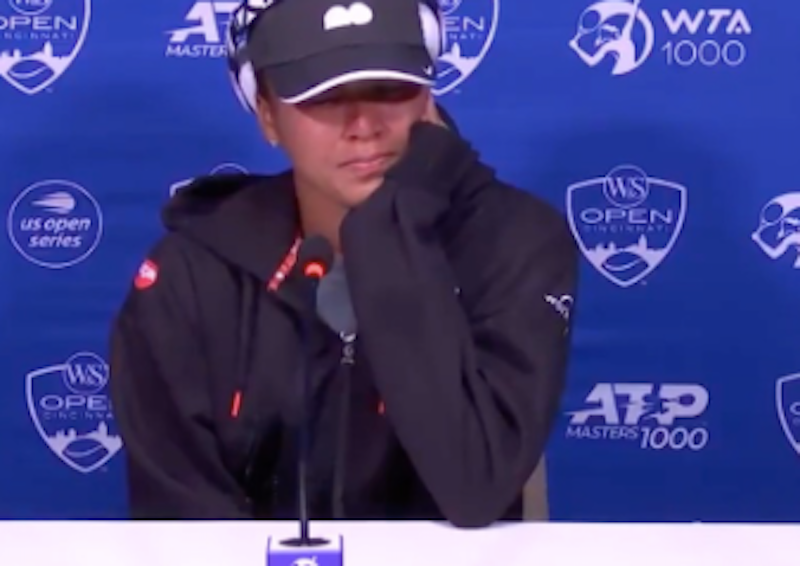 At the Western & Southern professional tennis tournament that began on August 4 in Cincinnati, Paul Daugherty, longtime sports columnist for the Cincinnati Enquirer, asked world number two woman player, Naomi Osaka this question: "You’re not crazy about dealing with the media, especially in press conference settings. Yet you have a lot of outside interests that are served by your media platform. How do you balance the two?"

Osaka expressed doubt that about her antipathy to the media, although she withdrew from both the French Open and Wimbledon because of the media, and eventually replied, "I'm not really sure how to balance the two. Like I'm figuring it out at the same time as you are, I would say." That's a thoughtful answer, but the question brought tears to the eyes of the Japanese tennis star, who then left the press conference to compose herself before returning.

New York Times tennis reporter Ben Rothenberg tweeted that the question, from "an unfamiliar person," had an "aggressive tone," which isn’t true. Sportswriters aren’t paid to ask bland questions, which produce bland copy, but rather to be provocative without being rude. When the Zoom conference moderator told the tennis player she could move on to the next question, Osaka declined, saying that she found the question interesting.

Daugherty showed strength in asking a question that was bound to bring heat, but he'd soon find out that in today's victim-centric culture, showing strength can make you weak. On the flip side, as soon as the sensitive athlete shed a tear, she became strong. There're hundreds of people rallying behind her on Twitter now, many of whom want the Cincinnati reporter fired (or much worse) for doing his job. You might say "hundreds" doesn't mean much, but all it takes to wreck someone's life is a couple of dozen outraged "experts" on that social media platform.

Osaka's agent, Stuart Duguid, knows how to play this new game of reversing the power dynamic. "The bully at the Cincinnati Enquirer," he responded, "is the epitome of why player/media relations are so fraught right now," even though, in general,  they're no more "fraught" now than they ever were. Athletes have always hated being subjected to the media after a loss. "Everyone on that Zoom will agree," Duguid continued in his statement "that his tone was all wrong and his sole purpose was to intimidate. Really appalling behavior."

Everyone agrees? We're supposed to believe that Daugherty's "sole purpose" was to intimidate a player who said she found the question interesting? The sports agent, who has ample experience with the tennis media, doesn't even believe his own words. Nor does Duguid believe the last words of his disingenuous statement: "And this insinuation that Naomi owes her off-court success to the media is a myth—don’t be so self-indulgent." Osaka made $55.2 million last year, the vast majority of it in endorsements, of which sports agents receive a cut from 10-20 percent. You can be sure that, to earn at least $5 million, Duguid worked the media as hard as he could.

Daugherty and his family are now getting death threats. Naomi Osaka, who's not strong enough to handle media questions, is now stronger in that she's managed to garner even more protection against probing questions from the media. Tennis Channel threw one of its own under the bus by calling Daugherty a "bully" in its shameless headline. Tennis journalists have been warned.

In a recent article, Katie Herzog wrote that she has heard from doctors who’ve been reported to their departments for criticizing residents for being late. These doctors, by trying to act strong, were instead rendered weak, as this type of accusation can end a career. Any doctor who's been reported once will think twice about who they criticize in the future, which will make a handful of people feel better, but won't do much for the patients they treat.

Herzog also wrote about Norman Wang, the University of Pittsburgh cardiologist whose career was damaged last year after he published a paper in the Journal of the American Heart Association in which he posited that affirmative action and other diversity initiatives have failed to meaningfully increase the percentage of black and Hispanic clinicians in his field. Wang advocated for race-neutral policies in medicine, an act of strength aimed at producing better results for patients, but it ended up making him weak. JAHA issued an apology and retracted the piece, although the publication cited no specific errors in Wang’s paper. Wang then lost his job as the director of a fellowship program at the University of Pittsburgh Medical Center and was prohibited from having any contact with students.

Sharonne Hayes, a cardiologist at the Mayo Clinic, called Wang a racist without offering any supporting evidence. She knew that just accusing him of such a thing would make her strong (the kind of strength you get when you stoke a mob) and weaken him.

"Weak" being the new "strong" is leading us down a path paved with self-censorship. Students raised with the ludicrous, childish notion that anything that runs counter to their worldview makes them "unsafe" now control what their teachers can say. During an endocrinology class at a medical school in the University of California system, a professor apologized during a lecture for saying, "when a woman is pregnant," which he then told his students "implies that only women can get pregnant."

In the progressive utopia, where the weak get strong with bullying tactics, men can also get pregnant, and if you suggest otherwise you must grovel to your student overlords like this professor did: "I don’t want you to think that I am in any way trying to imply anything, and if you can summon some generosity to forgive me, I would really appreciate it."

That's how a teacher who's scared to death of his students sounds.