Chicago will try to trade for A’s Ben Zobrist. 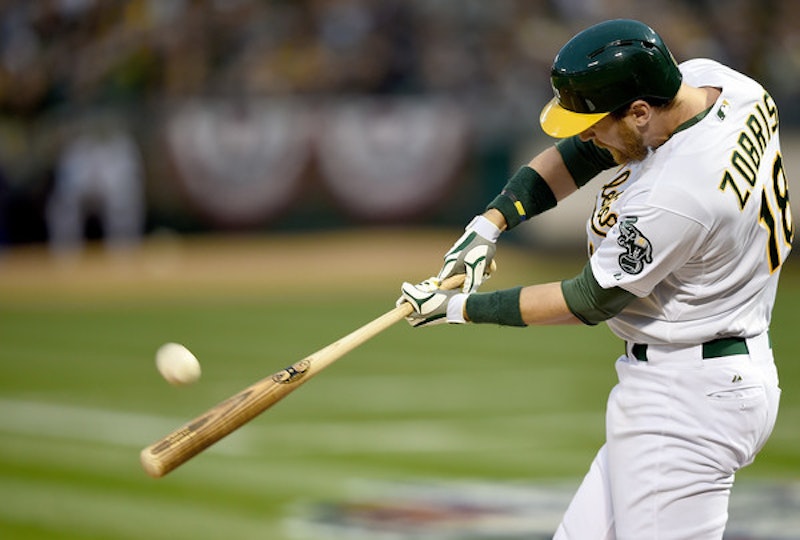 Just as Javier Baez’s season was about to take a major upturn, the Cubs’ prospect suffered another setback. It’s been a season of tragedy and disappointment for the former first round pick. The broken finger suffered sliding into second base over the weekend derailed what appeared to be an imminent recall to the Major Leagues. Now Baez and the Cubs are left looking for answers.

Baez struggled with pitch recognition and a low contact rate during his initial big league trial last summer. He flashed prodigious power on occasion but simply struck out far too often to be a MLB regular. Baez arrived in Arizona this Spring Training with a chance to make the Cubs’ Opening Day roster but was quickly overshadowed by Kris Bryant and Addison Russell. Baez eventually lost the second base job to Tommy LaStella and was sent to minor league camp. An early season injury to LaStella appeared to open the door for Baez but he took a leave of absence in early April after the death of his 21-year-old sister.

Baez eventually came back from that heartbreak to show vast improvement at Triple-A Iowa. After striking out in a staggering 41.5 percent of his big league at bats last season Baez has dropped that number to 25.3 percent for the Iowa Cubs. His trademark power was still on display and he’d upped his on base percentage to .386. Baez had started four consecutive games at third base, which, coupled with Kris Bryant’s start in left field last week for the Cubs, led to speculation that a return to Chicago was in Baez’s immediate future.

The broken finger Baez suffered over the weekend could sideline him until early August. The Cubs appeared to be readying Baez for a big league recall this week to either serve as a designated hitter during the upcoming interleague road trip or help fill the production void in the outfield. Shifting Bryant to left field, Baez to third base, and Chris Coghlan to the bench would’ve been an improvement for Joe Maddon’s lineup. Now with Coghlan scuffling and Baez joining Jorge Soler on the disabled list the Cubs are left searching for alternatives.

Chicago has been linked to trade rumors involving current A’s infielder Ben Zobrist. Maddon managed Zobrist for several seasons in Tampa Bay and deployed the versatile veteran all over the diamond. The A’s are mired in last place in the AL West after a series of bewildering offseason trades. Zobrist, who’s set to become a free agent following the season, could be a hot commodity on the trade market over the next seven weeks. Chicago, Baltimore and Washington have all been linked to him. The Cubs could dangle Double-A first baseman Dan Vogelbach to entice A’s GM Billy Beane. Vogelbach and his .436 OBP and .933 OPS for the Tennessee Smokies has emerged as an attractive trade chip with Anthony Rizzo locked in long term at first base with the Cubs.

Earlier in the season there was some speculation that Vogelbach’s teammate Kyle Schwarber could be an option in left field for the Cubs. Schwarber, Chicago’s first round pick in 2014, has hammered Double-A pitching for 12 home runs and a 1.024 OPS this season. Schwarber played some outfield after signing with Chicago last summer but he’s played exclusively behind the plate in 2015. Scouts still consider the odds of Schwarber sticking at catcher a long shot but the Cubs seem intent on giving him every opportunity to prove himself. While his bat might be Major League ready, Schwarber’s defense, either behind the plate or in the outfield, still needs major work. The Cubs could give Schwarber the chance to DH over the next two weeks as they play seven of their next 13 games in American League ballparks, but an audition as the full-time left fielder is highly unlikely.

The Cubs could turn once again to Arismendy Alcantara to fill the outfield void. Alcantara struggled at the plate in a half season with the Cubs in 2014. He broke camp with the team this spring but a slow start had him packing for Iowa. Since returning to Triple-A, Alcantara has excelled with the bat while playing all over the diamond. He’s done his best Zobrist impression playing games at 2B, 3B, SS, CF and LF. Alcantara has slashed 18 extra base hits, stolen 11 bases and posted an OPS of .860 in 44 games for the Iowa Cubs. If Chris Coghlan can’t soon rekindle his 2014, magic Alcantara may be headed back to Wrigley.