Upset on the Red Clay in Paris 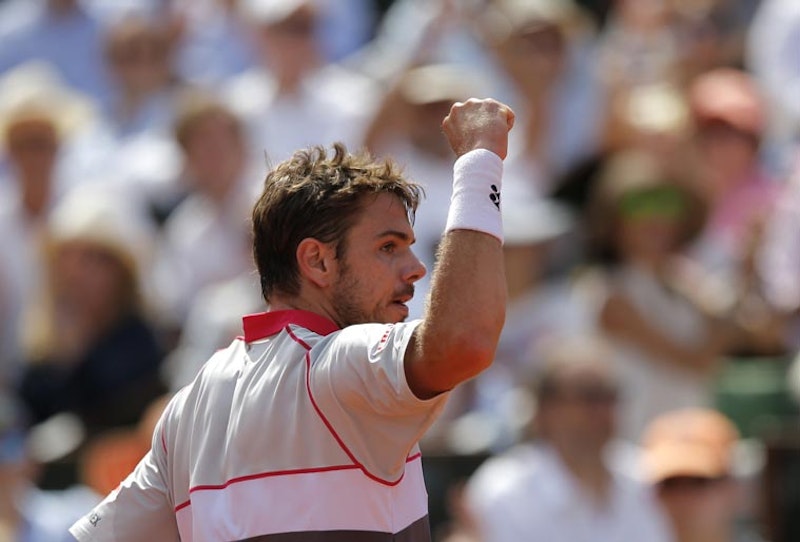 Switzerland's "other" player, Stan Wawrinka—wearing what appeared to be a pair of reddish boxer shorts—got in the way of a forgone conclusion Sunday at the French Open Tennis Championship when he defeated world number one Novak Djokovic of Serbia, 4-6, 6-4, 6-3, 6-4, to win his second Grand Slam career event. This had been a remarkable year thus far for the Serb sensation, and had he gone ahead and fulfilled expectations (his record against Wawrinka was 17-3 coming into the match) on the storied red clay of Paris' Roland Garros stadium, the whispers about him being on course for a potential Grand Slam would’ve started. Djokovic had already won the first major title of 2015 in Melbourne by taking the Australian Open, but while he has eight major tennis titles, on Sunday he continued his frustrating trend of never having won two in a row. Djokovic also has yet to capture a French championship.

Sunday's event seemed like a "second final" within one tournament, as Djokovic had already played nine-time French Open winner Rafael Nadal on Wednesday in the quarterfinals, defeating the Spaniard in straight sets, 7-5, 6-3, 6-1. Prior to this match, Nadal had vanquished Djokovic in all six of their meetings at Roland Garros, but the Serb had won 26 straight matches before stepping onto the court on Wednesday, and seven in a row was looking like far from a given. Those six losses had hardened Djokovic's resolve, much like the playoff losses of the Chicago Bulls to the Detroit "Bad Boys" did to Michael Jordan, and he finally got his breakthrough win in an impressive fashion. It was only the second defeat for Nadal in 72 career matches at Roland Garros, and it must’ve been jarring to be so thoroughly dominated on a surface that might as well have his name on it for all the success he has enjoyed pounding his brutally effective topspin forehand on it.

To give some perspective to how stunning a run Nadal had going in the Paris tournament, consider the fact that he’s won this single tournament nine times, while the legendary John McEnroe won a grand total of seven major singles championships. Having an additional five Grand Slam singles tennis titles on his resume brings Nadal's major total to 14 now, second all-time (along with Pete Sampras) only to Roger Federer's 17 for most Grand Slam singles titles. Catching up to Federer in the major championships department has long been on Nadal's mind—though he wouldn't admit this publicly—but he's 29 now, with a lot of hard miles on his powerful legs.

Interviewed after his loss to Djokovic, Nadal said, "I lost in 2009 and [it] was not the end. I lost in 2015 and [it] is not the end." In 2009, Nadal certainly believed that, but one has to wonder if he’s as convinced at this point. After coming back from 0-4 deficit in the first set to nearly take the set, he was thoroughly dominated by the Serb for the rest of the match. Nadal finished the match with a double fault on his serve, which punctuated the feeling that his heretofore indomitable will at Roland Garros had been broken somewhere in the final set.

Stan Wawrinka will move up in the world rankings from number eight to number four after his win in Paris, and his victory may indicate another change in the guard in the world of tennis. It wouldn’t surprise me at all if Nadal never wins another French, but even with a best-case scenario, his window is closing fast. As for Wawrinka, he so thoroughly dominated his countryman Roger Federer in Paris with a straight set win in the quarters that one has to wonder if he’s now eclipsed his 33-year-old friend on the tennis map. His remarkable power on both the forehand and backhand sides has developed to the point where he may have gained an intimidation factor against his opponents, who must be wondering where they have to hit the ball where Wawrinka cannot smash it for a winner. The Swiss ace certainly breezed through this French Open, not having been pushed to five sets even once.

Wimbledon starts on June 29 at the All England Lawn Tennis & Croquet Club in the suburbs of London. Novak Djokovic will be itching to prove he hasn't lost his world number one mojo. Roger Federer will be competing to show he's still capable of winning a major at his advanced age. Andy Murray will suit up with the intention of announcing that he can win the tournament in his home country once again. Stan Wawrinka will step onto the grass courts of Wimbledon with the hope of continuing his momentum. I think he senses he could one day be the world's top player now. Several questions that were raised in Paris may get some resolution by the time one player hoists the Wimbledon Trophy over his head on July 12.