Her retirement announcement was met with mixed reviews. 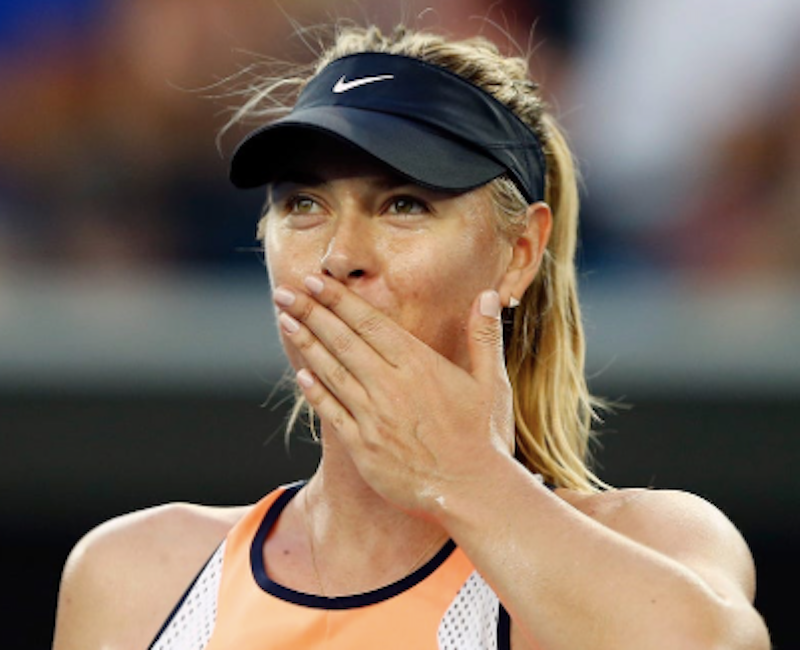 Tennis' Ice Queen, Maria Sharapova, announced she's retiring from the game at the age of 32 after a 19-year career. The Siberia-born, blonde-maned tennis champ (and world-class shrieker) put the word out in a Sharapova-like manner with a slick essay in Vanity Fair that reads like it was completed with professional assistance. The five-time major championship winner can boast of the remarkable achievement of winning at least one WTA title for 13 years straight, but has struggled in recent years with a drug suspension and a bum shoulder.

Sharapova's 15-month suspension in 2016 for using meldonium, which had recently been added to the World Anti-Doping Agency's list of banned substances, will forever taint her career, despite the vigorous PR effort her team launched to minimize the damage. That career, while spectacular, didn't live up to the early promise that was established when Sharapova defeated Serena Williams in straight sets at 17 to take the 2004 Wimbledon title. But you can't take away her 36 singles titles and $38 million in career prize money. If you add off-court earnings, Sharapova hauled in over $300 million.

Sharapova's life is an American success story, though she never loved America enough to represent the nation in competition. Her heart has always belonged to Russia in that regard. At age six, her father took her to Nick Bollettieri’s Tennis Academy in Florida, where she slept on a pullout couch in a $250-a-month apartment. It was there that young Maria developed the mechanical style of play that the famed tennis coach teaches, which involves standing on the baseline and hitting every ball as hard as you can. Thirteen years later his student would become the world number one. Women's tennis was supposed to have been gifted with an exciting new rivalry—young upstart versus established champion—after the Wimbledon stunner, but it never happened. While Sharapova was up 2-1 early on, she lost the next 18 of their battles, finishing up at 2-19 against Serena. What developed between the two players was more like a long-simmering feud than a rivalry. Sharapova mentioned Serena about 100 times in her autobiography.

Sharapova won't be missed in the locker room. There was no outpouring of affection for her on Twitter about her leaving the game, to say the least. That's what happens when you're cool and distant towards your fellow players, and when you return from a drug suspension showing little humility. In the end, Sharapova got her humility on the tennis court as she plummeted towards number 400 in the world rankings.

No portrait of Maria Sharapova would be complete without a mention of what's called her on-court "grunting," which really was screaming. Monica Seles was allowed to get away with it back in her era, and the Russian carried on this unfortunate tradition. The WTA would penalize it if it had any backbone. When Sharapova played against fellow howler Victoria Azarenka, they sounded like two red foxes vying to mark their territories. Not only is this habit unpleasant for the fans, it's distracting to the opponent. Coaches who've trained their players to make these grating noises have contributed to the problem.

When asked if she thought her sound effects were a problem, Sharapova once responded, in regal style, that nobody important enough had called her on it yet. Among the unimportant were her fellow competitors, who weren’t happy, especially when the screams came louder on important points for some reason.

There are ways, especially if you haven't put in the work yourself, to sum up the career of a great athlete with some serious downsides without letting the negatives take over. They've earned at least that much. ESPN's Bomani Jones, who sits and issues opinions he's not held accountable for for a living, isn't professional enough to understand this. On the show he co-hosts, High Noon, Jones prattled on about how many times Sharapova had lost to Serena. "You won a career Grand Slam?" he sneered about a feat only 10 women in the history of tennis have achieved. "Barely remember it." Jones then said that it looks like the Russian might’ve cheated for years, showing his ignorance about meldonium not having been banned until 2016.

High Noon was cancelled, suggesting that there's little appetite for Jones' cheap bloviations, but his naked display of scorn for a great athlete upon her retirement is indicative of Sharapova's reputation among many black people. There's resentment over Sharapova outearning Serena in endorsements, and suspicion that the disparity's race-based. There's probably truth in that, but the 6-foot-2 Russian, who was the highest paid woman in sports for 11 straight years, is a marketer’s dream with her svelte figure and Hollywood looks. She's Uma Thurman with a cannonball serve. Whether it's fair or not can be debated, but Sharapova probably didn't have to win even close to 36 tournaments to achieve that kind of dominance.

She was a fine ball striker, but there wasn't much grace or variety to Sharapova's brute-force brand of tennis. If you want beauty, you can watch Roger Federer, who moves like a ballet dancer. While the Swiss champion is respected and beloved, the Russian one's mostly just respected, at least among those who don't hate her for their own reasons. Maria Sharapova's one of the fiercest competitors women's tennis has ever seen, and that alone makes her worthy of respect. The sport was "all business" to her, so she's not leaving many friends behind. I doubt that bothers the Ice Queen.