New Hockey Documentary Pulls Its Punches Against the NHL

Tough Guy explores the darker side of professional hockey. 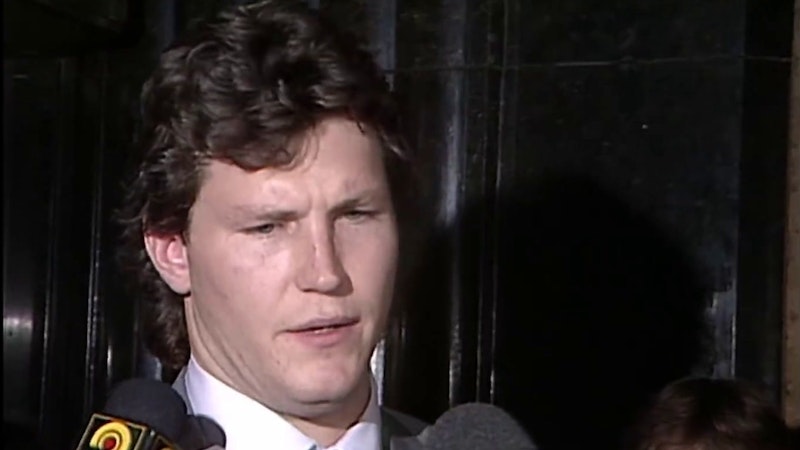 The opening sequence of Tough Guy: The Bob Probert Story (recently released on Amazon Prime Video) is archival footage of a New York Rangers game in Madison Square Garden in February of 1992. Approximately two seconds after the opening faceoff, the Rangers' Tie Domi (5'8") and Bob Probert (6'3"), of the Detroit Red Wings, square off and trade haymakers for about 40 seconds before the refs break them up. No pre-fight animosity was involved. This was an NHL ritual. Domi was just trying to make a name for himself by taking on the guy known as the Heavyweight Champion of the NHL.

The champ wasn't really in the mood to fight, but it was his habit to indulge the league's young bucks upon their request, as Domi had done. As a bloodied, but not particularly damaged, Probert walked off the ice, a gloating Domi made gestures indicating he was wearing a boxing championship belt. Two of hockey's most feared bruisers had put on a sideshow—while perhaps damaging each other's brains—before any actual hockey had been played. The fans loved it. The league condoned it. There would be a rematch.

Probert, who was fully committed to violence throughout his hockey career, would get the better of Domi (they’d fight seven more times during their careers) in their second bout later in the year. As former NHL player Craig Coxe explains on camera, whenever Probert was on the ice, the other team feared him so much that his teammates felt bigger, stronger, and braver. Director Geordie Day, via interviews with Probert's family, teammates, rivals (including Tie Domi), and buddies, and using game footage, news reports, home movies, and snippets from an unidentified interview with Probert that weaves its way through the film, has crafted an in-depth, yet ultimately incomplete, portrait of a troubled player known mostly for being, in NHL parlance, a "goon," although he was a skilled player as well. Probert was the villain on the ice who'd punch the goalie in the face.

Day presents footage of many of his protagonist's more notable battles inside the rink while documenting his off-the-ice struggles with addictions and the law. Probert became an alcoholic in his junior hockey years in Canada, and he picked up a cocaine habit as a pro. As one of his former teammates explains, they liked coke because it allowed them to drink an extra three hours, but it got the Red Wings forward a six-month stay in a federal prison at age 24 when he got busted carrying 14 grams of the drug across the Canadian border at five a.m. while drunk.

It's hard to keep up with all the stints in rehab, the arrests and resisting of arrests, the auto and motorcycle accidents that Tough Guy documents. Probert's self-destructive nature is on full display, as is his brutality, but Day does a good job of humanizing his subject with his use of home movies showing the hockey player's sweet side as he shared good times with his wife and children.

Probert turned to steroids as the players got bigger and stronger. Then it was opioids for the pain caused by all those punches he took. This is the point where the director misses his chance to explore the NHL's culpability in letting Probert fight while people like prominent hockey announcer Don Cherry enthused about what a "beauty" that night's donnybrook had been.

The NHL imposes penalties on players who fight, but it's no real disincentive because both players go to the penalty box afterwards. Fighting's not permitted in pro baseball, basketball, football, or soccer. If you fight in college hockey, you get kicked out of the game, which is why you don't see fights in college games—games that lose no excitement because of their lack of fisticuffs. The same applies to European and Olympic hockey. The NHL allows fighting because some fans like it, and it fears the backlash that ending it would bring. The league is making its players into gladiators for its own profit.

Day features Cherry throughout the film. The announcer says, "I never talk about concussions. You guys better be very careful because that's a touchy subject." A touchy subject for the players? It sounds like he means it's a touchy subject for the NHL, and the director lets him get away with that. Day doesn't present any medical experts or observers of NHL hockey who could provide insights on the league's tacit approval of fighting and how that affects players' health. Probert died of a heart attack at 45, and a postmortem examination revealed that he suffered from the brain disease CTE. It was likely that had he lived longer, the brawler would’ve been beset by early onset dementia. All those punches from his approximately 240 fights (and that's just the regular season) took their toll.

Tough Guy, in its first hour, delivers the perfect set-up for a devastating indictment of the NHL, but the director whiffs by concluding with various people reminiscing about Probert rather than delving into the league's possible complicity in his opioid abuse, brain disease, and early death. Day employs an overly-dramatic score, but ignores a crucial behind-the-scenes drama—one that's driven by the bottom line. Tough Guy is a tragedy and a cautionary tale that fails to explore a crucial element of its main character's downfall.