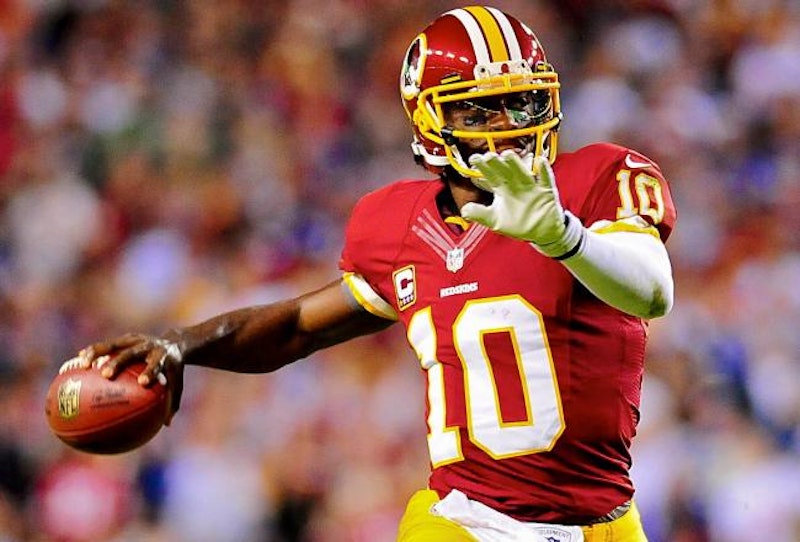 This past August the excellent football writer Bill Barnwell wrote a piece for Grantland.com called “The NFL Trade Value Rankings.” It’s a self-explanatory premise. However, a list of trade value isn’t the same thing as listing the best players in the sport. It takes the following into account:

In other words, the player with the most trade value in the sport would be a young quarterback (most valuable and scarce position) on an entry-level contract (cheap) who has performed at a Pro Bowl level. Barnwell’s rankings came out before the season started, so with the benefit of a bit of hindsight we can look at how they have changed since then. In fact, I think they’ve changed substantially.

Today’s NFL is a pass-first, pass-second, and pass-third league. The era of the game manager quarterback winning games through not losing them is over. Therefore, ranking running backs, offensive lineman or really any position other than quarterbacks in the top five is indefensible.

If Barnwell were to re-do this list today I’d guess there would be two big changes. The first would be Eli Manning’s drop off the top ten.

In fact, one wonders why he’s even in the top five of this list. Going back to 2004 he’s never been better than seventh in either DYAR (Football Outsider’s QB stat) or QBR (ESPN’s quarterback rating stat), and more often than not he’s around the 10th best quarterback. Not to mention his age and that he makes a Scrooge McDuck-ian load of money.

The biggest misses on this list are Robert Griffin and Andrew Luck. We’ll get to Luck in a moment, but Griffin should now be ranked ahead of the other four in the top five. First, there’s the contract. Rodgers, Brady, Manning, and Brees are all making many times Griffin’s four year $22 million contract. That leaves more money open to pay other players. Spending less on a quarterback is good and Griffin costs much, much less than any of the other guys.

Then we get to age. Griffin will be 23 next season. Rodgers will be 30, Manning will be 32, Drew Brees will be 34, and Tom Brady will be 36. Younger isn’t just better. It’s better because younger players get injured less, they heal more quickly, they have better physical skills, and most importantly they have more years before they’re not able to play anymore. In 10 years, Rodgers, Manning, Brees, and Brady will all have retired, while Griffin will be younger than Brees and Brady are now. That’s insanely valuable.

The only hurdle left is how good Griffin is in a comparative sense. Who cares if he’s younger and cheaper if he’s a vastly inferior player, right? This season Griffin is:

If you had to win one game right now you might pick Brady, Rodgers, or Peyton Manning (who’s 36 and serious neck injury keep him off this list entirely), but if you had to have a quarterback for the next decade, without a doubt you’d take Griffin.

Andrew Luck, who Barnwell ranked fourth on his list, shares much of the same age and contract-related advantages as Griffin, but a better pedigree in that it was he, not Griffin, who was selected first overall in last year’s NFL draft. Yes, Griffin won the Heisman Trophy as the best college player in the country, but it was Luck who was labeled the best quarterback prospect since Peyton Manning.

Luck’s ranking in Barnwell’s piece reflects that post-draft but pre-season thought process. But now we have actual data to use, and here’s what we’ve learned. Griffin is a Pro Bowl quarterback right now. Luck is a good rookie quarterback. The Colts can’t be unhappy with their selection (yet) but the difference between those two labels is drastic.

Here’s the bullet point version of Luck’s season (presented in the same order as Griffin’s above):

I came out against the Redskins trading three first round draft picks (and a second rounder!) for Griffin not because I didn’t think Griffin would be any good, but because I didn’t know it for sure. When a player is drafted the experts fit him with any number of labels and superlatives, but we don’t know how good he’ll actually be until he gets on the field. There have been too many misses, too many drafting mistakes to claim otherwise. Until we saw him in action, Griffin was less than a sure thing. Now he’s played 14 NFL games and we’ve seen him do amazing things and perform at a high level. He’s a sure thing.

With Luck, while he’s played 15 games, we have yet to see that. This isn’t to say Luck won’t be a great quarterback. He may, but he isn’t now. That’s a huge difference in risk and it should be reflected in a player’s trade value.

Griffin was ranked 16th on this list, but now he is more valuable than Luck, Manning and the whole lot. He is the most valuable asset in football. The Redskins gave up a lot for him and at the time it seemed like too much. As it turns out, they got a bargain.