Sports are supposed to be good for one’s character. I doubt that. 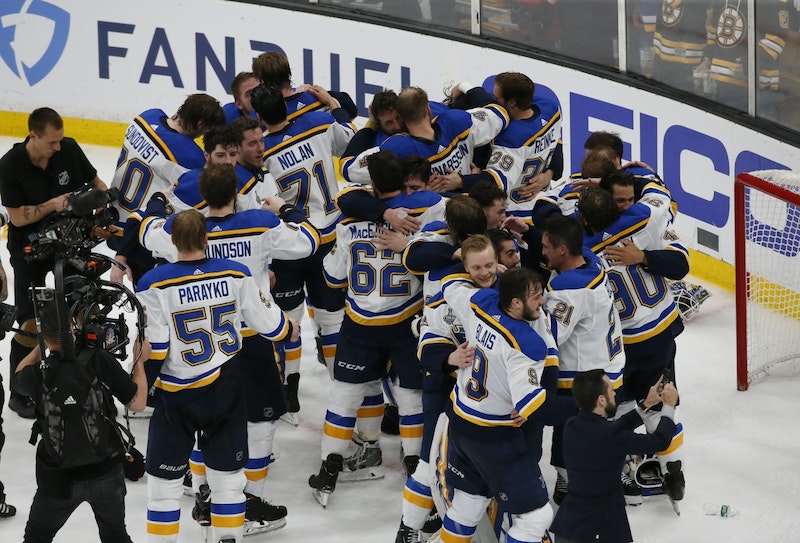 I was genuinely happy when the St. Louis Blues won the Stanley Cup last week. The franchise joined the NHL at the start of the 1967-68 season, and despite making the playoffs 42 times since, had never won a championship. This year, they made a lot of people very happy. Including me, a fan of the Montreal Canadiens.

A large part of the reason I’m so happy about St. Louis winning is because they defeated the (hated, despicable, grotesque) Boston Bruins in the final. I’m not a petty man, but as the last seconds of Game 7 ticked down with St. Louis up three goals, I felt a glow as the game broadcast showed a series of mourning and weeping Bruins faces.

Malicious joy in another’s misfortune can keep you watching a sports tournament when the team you really want to win isn’t involved. Once my Canadiens narrowly missed the playoffs (tying a record for most points by a non-playoff team), I thought I wouldn’t be too interested in what happened next. I couldn’t feel too bitter about it one way or another; the team’s still in a rebuild, I thought, and it’s better for the draft position to miss the playoffs rather than go a round or two and get knocked out without a championship. The important thing, I concluded, was that Boston not win.

The problem was Boston had some good players. I thought they wouldn’t make it past Tampa Bay, the runaway league leader in the regular season; but then Tampa got swept by Columbus in the first round. The NHL playoffs are both a marathon and a gamble, where injuries test every team’s depth, but I didn’t see any team in the East who looked clearly superior to the Bruins. And, sure enough, they beat Columbus and then Carolina to get to the Cup final.

All along, as I do every year once the Canadiens are eliminated, I was cheering for not-the-Bruins. Usually that’s a lock. This year, I got tenser as the playoffs went on. It was the inverse of the way you usually hope playoffs go: instead of getting more nervous as your team wins more and gets closer to a championship, I got nervous because another team wasn’t losing enough. Every game the Blues won in the final cheered me up. After every game they lost I tried to convince myself hockey wasn’t really that important and didn’t matter in the long run. Life, one way or another, would go on, whatever happened.

But sports aren’t about rationality. Watch a hockey game and you’re watching an event you can’t affect one way or the other, an event in which chance has a large role (in the NHL, probably more than skill). And yet it fascinates, not just from the exhibition of athletic talent, and not just from the feeling of watching something happening in the moment. You identify with the team you choose to call the heroes. Or, identify with the teams opposing the villains.

Any serious hockey fan knows that the Canadiens and Bruins have a long rivalry going back long before the Blues and other expansion teams entered the NHL. I wouldn’t give the Bruins the satisfaction of declaring them the Canadiens’ top rival—that position belongs, to me, to the late unlamented Quebec Nordiques—but there are decades of games and battles and injustices between the teams. Overtime defeats. Controversial penalties. An NHL official with a son on the 2011 Bruins, whose greasy thumb on the scale gave the Bruins a wholly undeserved and asterisk-worthy “Cup win.”

Hating the Bruins is second nature. Is emotionally healthy? Is hate really ever justified? Try as I might I can’t help but conclude: when it comes to the Bruins, yes. It’s a positive pleasure to see someone, or a team of someones, suffer when you think they have profited unjustly in the past. It gives the illusion of a fair or just universe. Perhaps the pleasure isn’t simply in seeing the doers of wrong fail, but in finding a data point that supports an instinctive but false sense of the world. Consciously, I know that there’s nothing necessarily fair or moral in the world as it is, much as many people try to make it so. Unconsciously, it’s difficult not to see the hand of God in the misery of sinners.

Thus my joy in Game 7, seeing the Bruins broken, lost, faltering at the final hurdle, facing a short summer filled with aches and pains and a low draft position. There’s a line Genghis Khan supposedly had to the effect that “To crush your enemies, to see them fall at your feet—to take their horses and goods and hear the lamentation of their women. That is best.” (A version of this was later given to a more barbaric fictional character; this version comes from Harold Lamb’s book Genghis Khan.) The great Khan may go a little bit too far for me. But I felt a little bit of the sweetness he described when I saw the loss sink in on the Bruins.

This may be because I am a flawed and corrupt person. If so my only excuse is that the Bruins will bring it out in you. Sports are supposed to be good for one’s character; in this, as in so many other ways, I doubt it.