The NBA Should Protect Kevin Durant and Others from Playoff Injuries 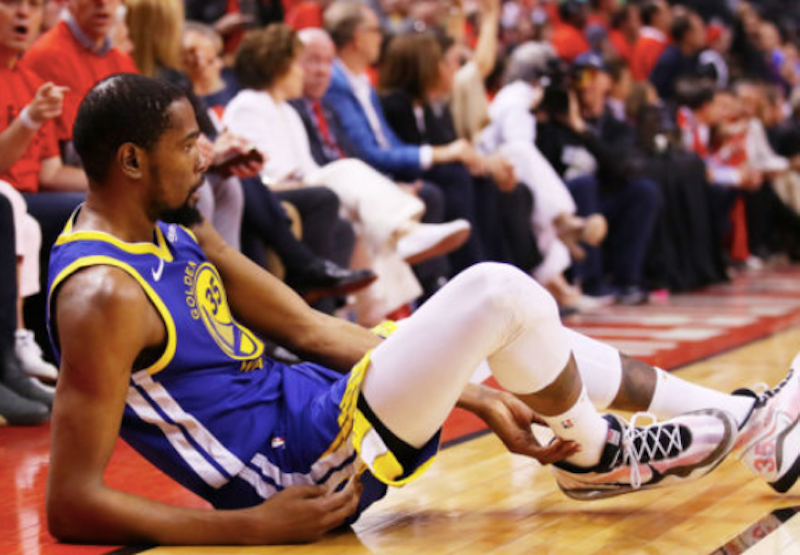 Kevin Durant has been a rising force since dominating the FIBA world championships in Turkey in 2010 and the London 2012 and Rio 2016 Olympics. He's won four NBA scoring titles, and was NBA finals MVP for the victorious Golden State Warriors in 2017 and 2018.

He often leads the league in jersey sales and all-star votes. He’s polite with the press, and played the role of photographer at a Super Bowl. He's often the most unstoppable player on the court. He can’t even stop himself from playing; such is his love for the game.

The NBA front office, along with Warriors management, should’ve stopped Durant, recovering from a calf injury, from risking his health in the NBA finals. Making a signature move on the perimeter, Durant fell to the floor in Game 5 with a ruptured Achilles tendon, which could cost him a potential max contract worth roughly $200 million over five years.

Some think that Durant, like other players, is ultimately responsible for his health. Or that the league office shouldn't interfere with decisions of the NBA's 30 teams. But team managers, trainers and players aren't detached, objective observers. Under pressure to win, they lean toward playing a superstar who looks ready to compete, especially with the team on the brink of elimination.

"When he's ready to play, he'll play. That's our approach," said Warriors coach Steve Kerr, noting his guys play more than 100 games every year. That put a lot of pressure on management as well as Rick Celebrini, director of sports medicine and performance.

Durant thought he could fight through his injury. At first he proved his bosses and doctors right, scoring 11 points in 12 minutes. But then he fell down and hobbled off the court en route to the dressing room and a surgical ward. Durant might miss all of next season. He might not sign with the Warriors, who could also lose Klay Thompson and DeMarcus Cousins to free agency. With their dynasty potentially crumbling, a tearful Warriors president Bob Myers said he’d take the blame for playing Durant.

This injury never should’ve happened. The NBA is partly responsible, and they should increase measures to safeguard players. The league office, which can veto trades or levy fines and suspensions, has more power than any player or team. They had a more objective view of the Durant situation than anyone with the Warriors. Durant, coming back too soon, was at heightened risk of worse damage. It was a predictable scenario. And now Durant might never return to the top of the game. But it’s not too late for the NBA to change how it handles player health issues.

Many players have praised NBA commissioner Adam Silver for fining and banning owners in California who disrespected them. The NBA also insists that athletes, in most cases, get at least a year of college education instead of entering the NBA draft straight out of high school.

The league, which already has mandatory concussion protocols, should set up its own medical teams to evaluate superstars in risky situations. This third-party medical team, with the power to over-rule team doctors, would add a crucial layer of checks and balances. In this case, Durant would have to prove to three levels of medical staff—his own, the team's, and the league's—that he's indeed ready to play. At the very least, this might lead all parties to err on the side of caution.

The NBA front office, which is directly responsible for scheduling, should also respond more urgently to calls to reduce the 82-game regular season, in order to save players who could end up contesting 28 more playoff games, one of the most demanding grinds in any sport.

This year the Warriors often played without Durant, Cousins, Andre Igoudala, Kevon Looney and Thompson (a hamstring in Game 2 and torn ACL in Game 6). In the 1989 finals, Magic Johnson and Byron Scott both pulled hamstrings while going for a three-peat.

Dallas had the best record in 2003 until losing Dirk Nowitzki with a strained knee in the western conference finals. Houston's Yao Ming limped off with a stress fracture in game 3 of the 2009 western conference semi-finals. Reigning MVP Derrick Rose tore his ACL in the first game of the 2012 playoffs, and he's never fully recovered his health, confidence or explosiveness.

Oklahoma City Thunder, finalists in 2012 with Durant, had title ambitions in 2013 until Russell Westbrook tore a meniscus in the second game of the playoffs. In the next post-season, OKC lost Serge Ibaka with a calf injury similar to Durant this year. OKC did the right thing, resting Ibaka and then limiting his action. Ibaka recovered and, five years later, won the NBA title with the Raptors.

This year, the Raptors won the NBA title thanks to Kawhi Leonard and smart medical decisions along the way. Leonard, finals MVP in 2014, played only nine games for San Antonio last year and spent most of his rehab time in New York despite pressure from his employers, coaches, teammates and media who chastised him for sitting out. The Spurs then traded Leonard to Toronto, who employed seven trainers and took a lot of heat for sitting a healthy Leonard out of 22 regular season games.

Leonard, after winning NBA Finals 2019 MVP, said he took extra recovery time last year because he didn't want to return as a bench player. It was the right move, and he made it against powerful forces inside the Spurs.

It's a good lesson for the league to learn. Do it the Kawhi way. Err on the side of caution, and save your stars for the games to come.