Can the Red Sox Hold On and Make The Playoffs? 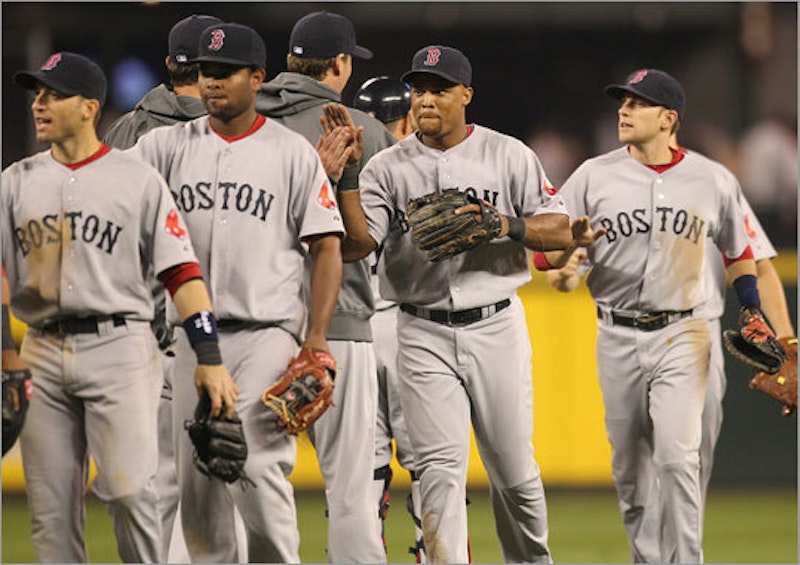 The Red Sox lost again on Sunday, the third consecutive series loss to the Tampa Bay Rays and the seventh loss in nine games to a team that was out of playoff contention just two weeks ago. The Red Sox, who’ve won just four games this month (as of Monday morning) have taken what was a cakewalk, a tune-up for a playoff run, and turned it into a shocking mess. But the miracle is—and you wouldn’t know it from listening to any Red Sox fan, least of all me—that the Red Sox are still leading the Rays in the Wild Card race by two games. Going 72-37 from May through August is apparently the gift that keeps on giving.

You don’t go 4-13 by bad luck alone and the Red Sox have done their part to deserve their ignominious record by failing in just about every aspect of the game. Their bad play has run the gamut from fielding mistakes, base running mistakes, relief implosions, horrific starting pitching, and all-star hitters going cold simultaneously.

The Sox have also succumbed to what has become an unfortunate tradition around the end of the season in Boston, a massive run of injuries. The team has used 10 different starting pitchers this season, and are currently missing All-Star third baseman Kevin Youkilis, and All-Star starter Clay Buchholz. Boppers David Ortiz and Adrian Gonzalez are battling injuries and have missed some games as well, though they’ve been playing through the pain for the most part, diminished production be damned.

The offense is not to up to its mid-season peak, but the true culprit for the team’s swoon has been the starting pitching. The Red Sox have the worst starter ERA in baseball since September 1 at 6.37. What’s more, they’re repeatedly running out guys who most teams would have demoted or plain cut, but whom the Red Sox don’t have the healthy personnel to discard. Some help is on the way. Erik Bedard is coming back from an injury and Josh Beckett just returned this past weekend. Clay Buchholz, out since mid-June with a broken back (seriously), will throw off a mound today and may be able to pitch in the last series of the regular season.

So, can the Sox hold on? A question that would have seemed ridiculous two weeks ago is now keeping an entire region up at night. The answer is, sure, they can hold on. Will they? Probably. It’s an unsatisfying answer, but it’s the best I can do. In lieu of hocus pocus, I can offer some reasons for these educated guesses.

First, the schedule. There are 10 games left in Boston’s regular season. The Rays, the usurpers of the Sox wild (card) throne, have 10 left as well. The Red Sox will play three against the first place Yankees (.607 winning percentage) and seven versus the Orioles (.413). The Rays have three against Toronto (.503) and seven versus first place New York. Even the games against Toronto aren’t going to be easy.

Number two is improved starting pitching. As detailed above, the Red Sox starters have been set-your-eyes-on-fire-with-a-welding-torch bad. Kyle Weiland might be a good guy, but he’s been a disaster as a pitcher. Ditto Tim Wakefield, the veteran of 15 years who every five days gets shelled. The latest came yesterday against Tampa. Wakefield and Weiland are both scheduled to see one more start but that should be it for them. In their stead will be better options, like Becket, Buchholz and Bedard. Throw in (or place gently) a Jon Lester, and your rotation suddenly doesn’t look like a nuclear disaster area.

The offense has been adequate, the base running mistakes should dissipate, and it seems some of the injuries, at least those to the starting pitchers, are healing. Replacing the worst of the starters with even league average production from the formerly infirm will go a long way to providing a few more victories over the last 10 games. This brings me to my final point.

It’s only 10 games. It’s difficult to make up even as many as two games in a 10-game period. This is true even if the competition is at the same level. In this case, the Rays have the much harder road. That plus the return to the mound of at least some of the missing Red Sox starters combined with the removal of their replacements should allow the Red Sox to hold on. Maybe.