He's got all the potential in the world, with none of the polish. 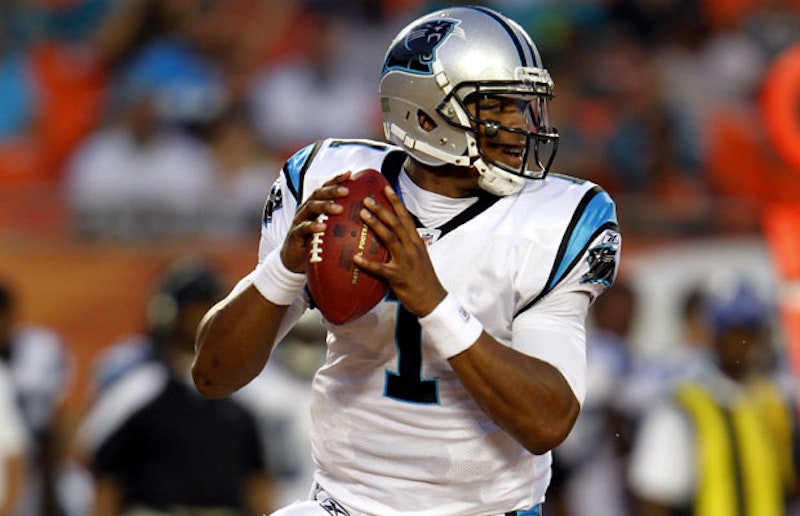 Carolina Panthers rookie QB Cam Newton has flashed glimpses of his tremendous potential this pre-season. He's also flashed some woeful accuracy completing just over 43 of his passes in three games. Newton started Thursday's game against the Bengals and will likely be in that spot the season opener in Arizona on September 11.

Newton's only competition for the job is second year man Jimmy Clausen. Clausen struggled as a rookie throwing nine interceptions and just three touchdowns with a QB rating of 58.4. Despite coach Ron Rivera's claims that there is an open QB competition Newton has received more playing time with the first team offense than Clausen. If Clausen were the long-term solution at quarterback the Panthers wouldn't have selected Newton with the draft's top pick. Newton is the future, but he's not ready.

Newton ran roughshod over the SEC last fall in the most impressive season for a college quarterback that I've ever witnessed. He looks the part of a superstar, but with no off-season workouts and an abbreviated training camp the Panthers should resist throwing him to the wolves. Carolina was a terrible team last season, and they haven't done much to improve their roster. They replaced longtime coach John Fox with former Chargers Defensive Coordinator Ron Rivera during the off-season. The change in coaches means a change in offensive schemes. The lockout put teams with new coaching staffs at a distinct disadvantage as they were robbed of OTAs throughout the spring.

Newton figures to struggle regardless of when he enters the starting lineup. The expectations of being the top pick will lead to fan unrest and unnecessary pressure on the rookie. It's not like Carolina will be battling for a playoff spot. The team figures to lose 12 or 13 games with or without Newton. Starting Clausen for the first two games of the season would buy Newton some time to get up to speed. It would also allow the rest of team to become more familiar with the new offensive scheme and playbook. If Clausen comes out and plays well in weeks one and two he would create a terrific problem for the Panthers. Carolina could continue showcasing Clausen in hopes of enhancing his trade value while working Newton onto the field in special packages. If Clausen struggles, as he's likely to do, there's no harm done. Carolina can bench him for the Week Three home game against Jacksonville and insert Newton into the lineup. The team may very well be 0-3 by that time and Newton's promotion could spark fan interest.

Waiting until Week Three to start Newton makes sense on many levels. The Panthers’ season opener is on the road at Arizona. Making his NFL debut on the road with just a month of practice time could be disastrous for Newton. In Week Two Carolina goes home to host the defending champion Packers, another rough assignment for a green signal caller. Newton could have two weeks to stand on the sidelines and get acclimated to the speed of the NFL game and the atmosphere of a pro stadium. There's plenty of football in Newton's future but the Panthers should err on the side of caution and put the rookie in the best situation to succeed. Starting Newton right away is setting him up for failure.