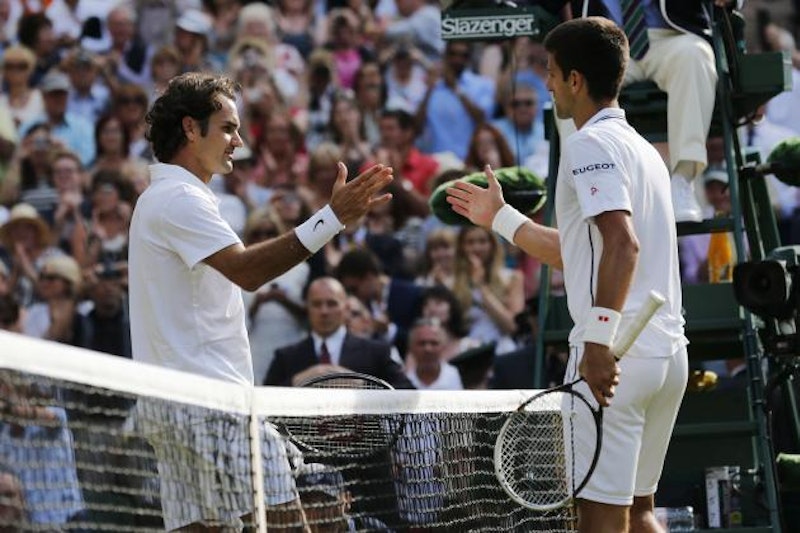 This year's Wimbledon tournament, the oldest and most prestigious tennis championship in the world, got its first official "surprise" when former number one Rafael Nadal was eliminated in straight sets in round two by the charismatic dreadlocked German, Dustin Brown. A closer inspection, however, reveals this was not such a shocker. Nadal is making a habit out of losing to no-names on the rye grass of Wimbledon, having bowed out to a player ranked 100 or lower three years running now. With this loss, "Rafa" will drop out of the Top 10 for the first time since April 2005.

A real bombshell looked like it was in the making when current world number one, Novak Djokovic, lost the first two sets of his fourth-round match to Kevin Anderson, 14th-ranked South African player. Anderson's cannonball serve was giving the defending champion fits, but Djokovic clawed his way back to a 2-2 set score before play was suspended for darkness.  Resuming the next day, Anderson continued to hold his own until finally succumbing in the fifth set, 7-5.

The number two seed, Roger Federer, had no such brushes with defeat in his quest for his eighth Wimbledon title. Apparently he hasn't heard that, at 33, he's too old to win majors now. The opponents he mowed down without breaking a sweat might tell a different story, although the Nureyev-like Swiss star plays with such grace he rarely appears to perspire in any on-court situation.

The controversy of the tournament was supplied—to nobody's surprise—by tennis' current enfant terrible Nick Kyrgios. The excitable Aussie couldn't hold it together after receiving a code violation for an "audible obscenity" ("dirty scum," which is actually not an obscenity) in his fourth round match against Frenchman Richard Gasquet. Sulking, the 20-year-old proceeded to throw the next game away by not even bothering to return two of Gasquet's serves, while hitting the other two weakly into the net.

Decades ago, John McEnroe laid out the blueprint for bad tennis behavior, but he didn't tank games when the umpires got his goat. He just screamed at them. Johnny Mac also won seven major titles, something the talented Kyrgios is unlikely to do unless he figures out how to manage his bad boy persona. Back home in Australia, where some constructive criticism could he helpful, swimming icon—and apparent Australian nativist—Dawn Fraser muddied the waters by inanely suggesting that perhaps Kyrgios, the child of Malaysian and Greek parents, should return to where his parents were born if he can't behave.

Elsewhere, Federer and Djokovic continued winning, moving down the path to their not-so-inevitable meeting in the finals as the number one and two seeds. The guy preventing that matchup from becoming a foregone conclusion was number three seed, Andy Murray, who Federer met in the semifinals. Djokovic faced Richard Gasquet in the other semi, but all eyes were on the main event.

Gasquet wasn't able to pull off a miracle, and Murray didn't really stand a chance against his opponent on this day. The Scotsman played well enough, but was unable to win a set against Federer, who appeared to have turned back the clock by about five years. Serving impeccably (Murray never broke his serve), and rushing the net like his coach—former serve and volley expert Stefan Edberg—has pushed him to do, the 17-time major winner never allowed the more defensive-minded Murray an opportunity to get into the match.

But Federer had his hands full with Djokovic in this Wimbledon final, for the Serb—who defeated Federer in five thrilling sets there last year—had an answer for just about everything the seven-time Wimbledon champ threw at him. The final score was 7-6, 6-7, 6-4, 6-3. The outcome could have been different. Federer broke Djokovic in game six of the first set, but was broken back in the next game. Had he been able to hold his break, the first set would have been his, and anything can happen when tennis' greatest of all-time wins the first set.

Federer slices up opponents with his formidable attacking style. Djokovic, on the other hand, smothers his with a nearly impenetrable defensive game that he's able to rapidly convert to offense. Once he's got the bag over an opponent’s head, his game slowly withers away, and that's what happened on this final Sunday at Wimbledon. In the second half of final set, viewers could see Federer running out of "oxygen" right before them.

But Federer needn’t have any regrets about this match. He knows he played at an elite level but was defeated by another great player on this particular day. He told the fans as much in his post-match interview, saying he was "still hungry." So, moving into his mid-30s, he has every right to believe he can still win majors. Djokovic is only 28, and has already won two majors this year. He has to be dreaming about whether he can some day be considered the greatest tennis player ever.