Are the Baltimore Ravens Superbowl Bound?

Only if they can pull off a second win against Cincinnati. 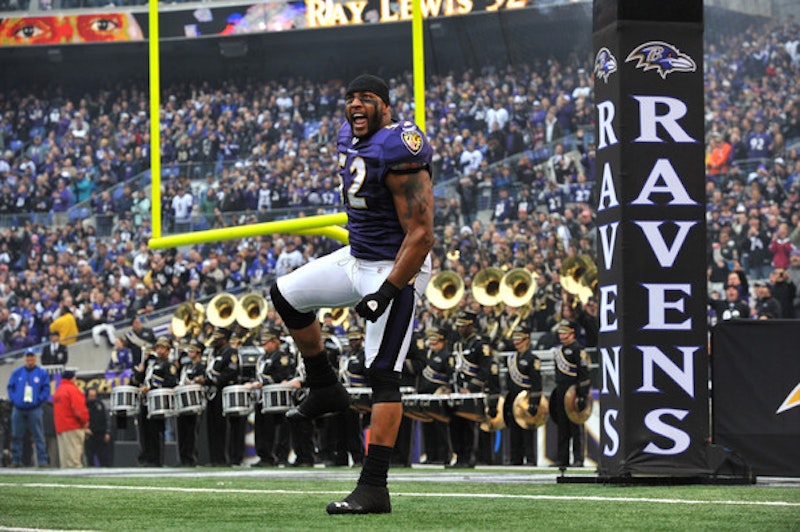 The NFL playoffs will begin a week early for the Baltimore Ravens. Despite sitting atop the AFC North Division at 11-4, Baltimore faces a must-win game in Cincinnati on Sunday. Granted, "must-win" is probably the most overused term associated with professional football. In a league increasingly designed to delivery parity, where rules are seemingly created on the fly week to week depending upon game situations, the concept of any regular season game being "must-win" is laughable. The only games that are "must-wins" are those that knock the loser out of the playoffs.

In that respect Sunday's Ravens-Bengals game is not a "must-win" for Baltimore. The Ravens locked up their fourth consecutive playoff berth with a Week 15 stomping of the Chargers. The Ravens will be in the playoffs regardless of the outcome of Sunday's game. The only thing to be determined is playoff seeding, and that's where things get tricky.

The Ravens control their own destiny (another NFL cliche). With a win Baltimore will either be the first or second seed in the AFC, earn a first round bye, and be guaranteed at least one home playoff game for the first time since 2006. A loss to Cincinnati and the Ravens will likely be packing their bags for another January road trip. That’s why I indulge in using “must-win.”

For the first three years of John Harbaugh's tenure as Ravens Head Coach the Pittsburgh Steelers were a thorn in the young coach's side. Perhaps I should say Ben Roethlisberger was the thorn. Baltimore seemed to have exorcised its Pittsburgh demons in two regular season victories of divergent scripts. The Ravens opened the season with a 35-7 thrashing of the Steelers at Baltimore's M&T Bank Stadium. The Ravens followed up that win with a stirring come from behind 23-20 Week 9 victory in Pittsburgh. Mission accomplished. Steelers vanquished. Bring on the playoffs right? Not so fast.

The Ravens followed up both victories over Pittsburgh with uninspiring road losses in Tennessee and Seattle. Baltimore's absurd 12-7 loss in Jacksonville to the woeful Jaguars on Monday Night Football in Week 7 seemed like a forgettable bump in the road. The problem is that Baltimore has now had four forgettable bumps in the road. The Ravens are money in the bank at home where the team went 8-0 this season. On the road Baltimore is just 3-4. The data tells us the Ravens are not a very good road team.

Baltimore has gone 4-3 in road playoff games in the past three seasons. An impressive run on the road, but still not good enough to get to the Super Bowl. There will no doubt be a lot of talk this week about how the Ravens are road-tested and won't be concerned about going on the road, whether it's to face Cincinnati or, in the playoffs. The problem is that the 2011 Ravens are simply a different team at home. Not just a better team, but a different team. I've given up on trying to figure it out (age on defense, inexperienced receivers, unstable offensive line configuration) and have just decided to let the numbers do the talking. A Ravens loss to Cincinnati on Sunday likely means Pittsburgh will win the AFC North Division title despite two losses to Baltimore. It would be the ultimate cock-punch for the Ravens and their fans. While the Ravens succeeded in knocking the Steelers off their perch the trip-ups on the road have put the entire season in jeopardy. The Ravens have no one to blame but themselves