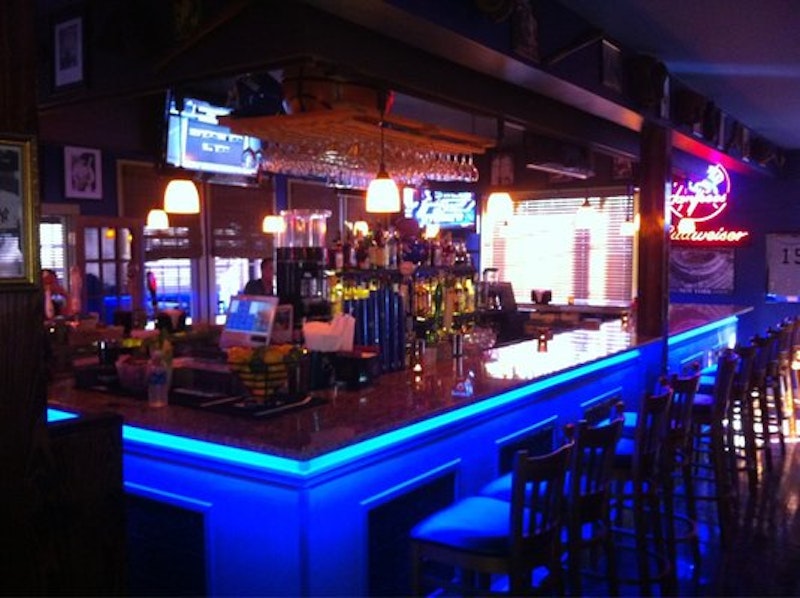 Late April weather did nothing to advance the game of baseball in the eyes of the sporting public, especially on the East Coast. It did not take long to grow weary of NBA ownership disorders splashed everywhere, while end-of-season high school and college baseball tournaments were played at the mercy of tarps and in front of plastic poncho-clad refugees slumped on metal bleachers. An MLB inter-league clash in Baltimore was a soaked stack of bricks and camera shots of puddle-strewn dugout floors. The old-timey Yankees radio tandem of Suzyn Waldman and John Sterling dusted off their litany of Joey Adams- style weather jokes in a steady stream of kvetching. Postponements piled up and doubleheader phobia began to creep through the walls of managers’ offices up and down the seaboard.

The resulting malaise sends worried fans to hide in roadside sports bars, like Sidelines in Upper Red Hook, NY. Not Red Hook, Brooklyn, but the village about 110 miles north of the city. It’s owned by Matt Michael, the son of former Yankees general manager Gene Michael, who as a player was master of the hidden ball trick and as an executive helped cement the mid-1990s rise of Yankees dominance. Gene “Stick” Michael reportedly prefers the nearby historic Red Hook diner for his sustenance, even though his son’s joint serves up a bevy of sports bar grub that keeps the locals happy.

Hide at Sidelines on a weeknight off-day and find plenty of elbow room. Michael also has more than the usual share of historic paraphernalia and collectibles on display. There are perfect imperfections, as the pop song implies, when the paper label on the case holding the signed Don Larsen ball shows his name misspelled as “Larson.”

The usual row of flatscreens glow like the modern fireplaces they are, with an amiable blonde bartender strolling beneath them. Texas and Oakland are reviewing a pick-off play at first that gets overturned. Dances with the Stars has some horse-faced couple running around, the Off Track Betting monitor is showing sloppy conditions (of course) at Mountaineer Park, and next to that is the absurd Manchester City English soccer fetish channel carried by the multiple-personality suffering YES Network. There is a framed road gray Thurman Munson jersey on the far wall, incredibly shrunken. In the display case near the restrooms are random old baseball cards underneath many signed items—a plaque has fallen forward, its engraved bravado unreadable now. Matt recently added the OTB hook-up, which is big heading into Kentucky Derby weekend, but he balked at adding the DirecTV MLB Extra Innings package because of the hefty fees. The blue lighting gives Sidelines a decisive “Yankees bar” feeling, though the owner defers to Mets supporters with the token neon Bud sign featuring the skyline logo of those loveable losers who so far this season have not followed their script.

YES Network was hyping Robinson Cano’s “return” as a Seattle Mariner with an albatross contract heaved around his own neck, a misfired non-event if ever there was one. The promo played and directly in the gaze of the screen was a knock-off Derek Jeter jersey framed on a pillar, turning its back on an old teammate.

Take a look at the standings. There is no comfort there as Month Number One of the season drowns itself. No team wants to surge forth and take charge, except maybe Milwaukee, as countless squads hover with NFL-like 12-14 records. Tommy John surgery spreads like a virus now, and fans can be thankful that the procedure was not first attempted on, say, Vincente Palacios or George Zuverink, then trouble would ensue every time the operation’s name is uttered. Which is every 10 minutes these days.

Yes, Sidelines will do in a rainy pinch. There are free peanuts in a barrel and many angles and alcoves for more private viewings, like the token Bruins fan suffering in the front room with a pint-glass Long Island Ice Tea during recent Stanley Cup Playoff drama. There are often misfired rumors about random appearances at Sidelines by Yankee greats past and present, keeping Yankee rabids and memorabilia collectors on their toes.

Matt had tried the sports bar thing years earlier in Hyde Park but the venue fizzled thanks to the strip mall nausea presently haunting FDR’s old town. There are the usual hurdles of kitchen personnel turnover and the DUI gauntlet that is the Village of Red Hook if patrons are heading south from the venue.

As the rain hits the window in Upper Red Hook, think of Anne Frank’s diary entry from February 23, 1944, as she expounds of the simple beauty of nature. “As long as this exists, and it certainly always will, I know that then there will always be comfort for every sorrow, whatever the circumstances may be. And I firmly believe that nature brings solace in all troubles.”