The Orioles Ought to Trade Zach Britton

A bargain in the market for closers. 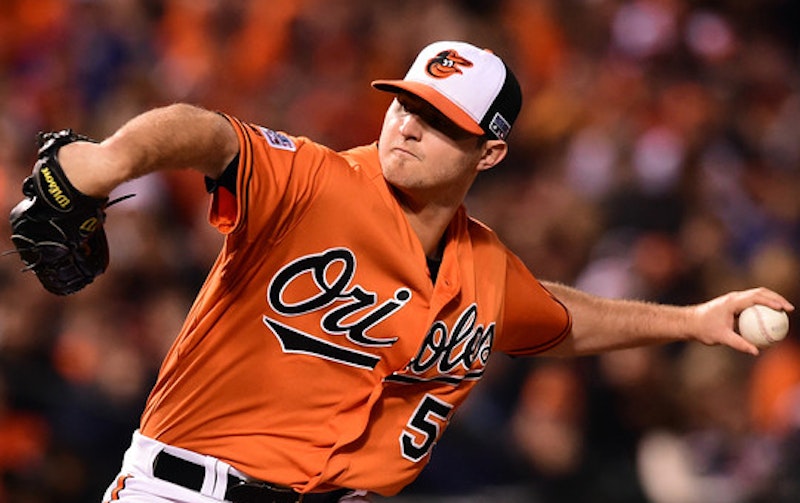 Zach Britton’s been a terrific closer for the Baltimore Orioles over the past two seasons. Britton has racked up 73 saves and posted ERAs of 1.65 and 1.92, respectively, as the bullpen stopper for the O’s. Now, with the team facing key losses in free agency and a dubious history in the free agent market, Britton could hold the key to saving Baltimore’s offseason. The 27-year-old All Star, who is under team control through the 2018 season, would attract many suitors.

The bullpen is one area where the Orioles have excess talent. Mychal Givens was impressive in his rookie year. In 30 innings the converted shortstop posted a 38/6 strikeout/walk ratio, an ERA+ of 232 and 11.4 strikeouts per 9 innings. Givens is joined by Brad Brach, Oliver Drake and Chaz Roe to form a group of right-handed relievers that will take on a greater role in 2016. Former third round pick Mike Wright also has the look of a potential late-inning power arm. Dealing Britton would be painful to the Orioles, but the depleted farm system has left the O’s with serious roster concerns and few internal answers.

In the recently completed MLB postseason, the Los Angeles Dodgers, Chicago Cubs and New York Mets stood out as teams with stockpiles of young talent and gaping holes in the bullpen. Mets manager Terry Collins relied on Tyler Clippard and Jeurys Familia to weather late inning jams in the World Series. The duo was seldom up to the task. Clippard could depart as a free agent, further weakening New York’s Achilles heel. The Cubs’ bullpen was such a mess that Joe Maddon frequently went to D-backs and Braves castoff Trevor Cahill in crucial spots during the playoffs. Cahill performed admirably but a team with the talent and financial might of the Cubs figures to make bullpen upgrades an offseason priority. The Dodgers have had baseball’s highest payroll for several seasons running but the lack of bullpen depth led to early playoff exits and Don Mattingly’s dismissal. The three teams mentioned above have some of baseball’s deepest minor league systems and the talent to entice the Orioles.

The free agent market offers little in the way of proven closers. Joakim Soria, formerly of the Tigers and Pirates, is the top closer available. Veteran set up men like Darren O’Day, Tyler Clippard and Ryan Madson figure to cash in as free agents this winter as teams look to bulk up their bullpens. The Red Sox, now under the direction of Dave Dombrowski, dealt a package of high-end prospects to the Padres on Friday for All Star closer Craig Kimbrel. Cincinnati is said to be shopping Aroldis Chapman. Britton may be a more attractive option than either. Chapman will be a free agent next offseason while Britton is under team control for three more seasons. In acquiring Kimbrel, the Red Sox are absorbing the $37 million he’s owed over the next three seasons. Britton carries no such financial commitment.

The Orioles are unlikely to match the offers for free agents Chris Davis, Wei-Yin Chen and O’Day. Matt Wieters will return to Baltimore, accepting the club’s qualifying offer. The Orioles may also lose lesser talents like Gerardo Parra and Steve Pearce. Baltimore fell short of 2015 expectations largely because the starting pitching, particularly Chris Tillman and Miguel Gonzalez, failed to produce up to previous standards. The expected loss of Chen coupled with the continued injuries to Dylan Bundy figures to leave the Orioles in dire need of starting pitching. The team’s history suggests that a pursuit of top-shelf pitching is out of the question. The Orioles could sign a mid-level target like Scott Kazmir or J.A. Happ but such a signing would be more of a band-aid than an upgrade.

The Orioles will also lose Chris Davis. There’s plenty of talk about owner Peter Angelos wanting to keep Davis, but the Orioles’ contract offer will do the real talking. Baltimore has never signed a player to a contract in excess of $100 million, which is below the expected starting point of negotiations for Davis. An Orioles team sans Davis, Chen, O’Day and Wieters with gaping holes at the outfield corners and no starting pitching depth calls for drastic measures. Dealing Britton at his peak value for a package that features a young starting pitcher or middle-of-the-order bat may be Baltimore’s best bet for long-term relevancy.