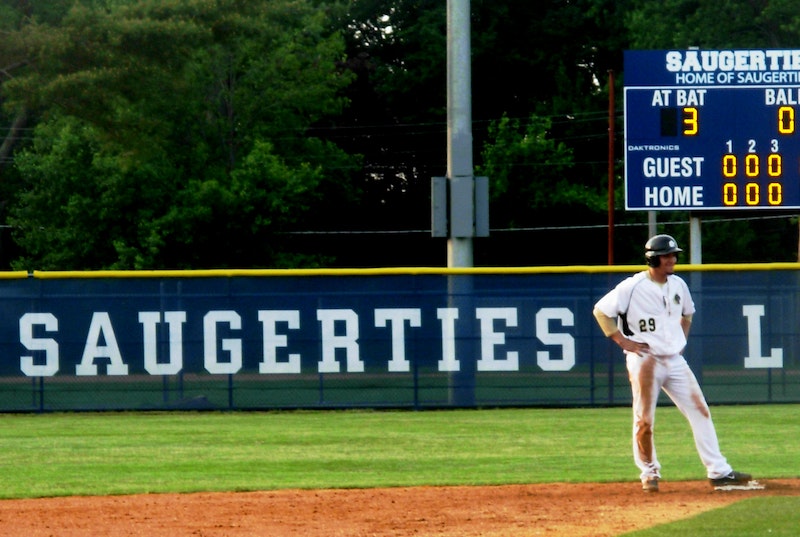 While other villages in Ulster, Dutchess and Columbia counties bicker about adding a few square feet to a lonely soccer field behind the library, Saugerties represents with serious recreation and top-notch facilities spruced up mostly by an army of sports-loving volunteers and the local Kiwanis. Jimmy Fallon’s hometown has an indoor ice rink, manicured softball and Little League fields, soccer fields, tennis courts, a skateboard park and an old diamond called Cantine Field nestled in the northern acreage of the village, not far from the horse show tents full of dressage and jumping and other fancy equine displays.

The Baseball Isolation Tank I discovered is the home plate grandstand at Cantine Field, a heavily-used ballpark now home to the Saugerties Stallions, a second-year franchise in the college-dominated Perfect Game Baseball League. The PGBL is one of many unsung regional circuits striving to be the Cape Cod League and essentially serving as summer stock for hard-working and hopeful college ballers. The team rosters run the gamut from Division I players to community college standouts to hangdog JUCO survivors and everybody in between. Wood bats are used. Local host families lend players their basement beds. Back-roads travel builds character as these young men voyage to such upstate New York hotspots like Victor, Little Falls and Boonville. Throw in a Utica, Oneonta and Albany and you have a travel agenda worthy of Sen. Chuck Schumer with a vanload of grant money.

Cantine plays big, and the grandstand is a hulking gray structure that looks like something that fell off the USS Intrepid during her renovation. The stand was built of concrete and steel I-beams by laborers from the Works Progress Administration in the late 1930s. There are some box seats in the first 10 rows of the lower portion, which was a recent upgrade put in by Stallions ownership selling the chairs as VIP season plans for the 25-home game slate. Pay those box seats no mind and head upstairs instead, using the steep U.S. Naval style narrow steel staircases on either side of the structure. Once you alight the stairs, the seating options are long gray slab benches of oak or poplar or ironwood with 39 coats of paint on them. There are two aisles and I-beams running down supporting the roof overhang in front of you so you have Tiger Stadium style view obstruction. There’s new netting strung up to protect meditating fans from balls fouled straight back from the plate, a few old speakers wired onto the ceiling beams and full privacy and protection via concrete to your rear and thick chain link fencing on the sides. Seated half way up to avoid the setting sun’s rays, your perfect perspective view of the diamond makes you feel like you are sitting in a steampunk ViewMaster of some kind. Safe and sound with the beautiful diamond laid out in the foreground you could survive a drive-by shooting, a Gamma Ray storm, a Vice magazine flash mob or a SARS virus outbreak. This is what FDR had in mind when he kicked the WPA into gear.

As the sun lowers into clouds that turn both azure and butterscotch beyond the outfield fence, the Stallions were underway against the Adirondack Trail Blazers, who hail from Boonville, the snowmobiling mecca of central New York. In front of you is a date that is going well. She is tossing her hair and the combined sunset light and Cantine floodlights show off her pristine complexion. A loud shattered bat from a Saugerties player named Carmine Giordano, a second baseman from Franklin Pierce University (the Ravens from Rindge, N.H.) does not scare the girl or her date with the sharp flat-top. She is next to a bored mom reclined and scrolling through her smart phone to look at cat pictures on Facebook, with her son and husband feeling the delightful effects of the isolation tank. Baseball levitation is being achieved as the solid box allows sound to resonate nicely off the steel. The chortles and cheers echo a bit as only about 55 of the 473 in attendance have chosen the home plate grandstand as their game vantage. The turret-style structure can be intimidating when seen from the standard third-base bleachers, so fear does keep the hordes away. The $3 beers flow from a tiny alcove in the bottom of the grandstand and suddenly the structure morphs into an FA Cup ground in the early rounds of the English soccer competition, only with much better weather. The howl of the home plate umpire ringing up Stallions outfielder Adam Chase (another Franklin Pierce University product) shatters the English soccer vision. But then you can see the ump forgot his homeplate brush and has to use his foot and you want to let him know, but the Mets fans in their garish twice-worn orange “2015 NL Champions” t-shirts get in the way. You notice there are no coaches boxes painted on the grass. And there is no “Take Me Out to the Ballgame” for the seventh inning stretch. They have a rain tarp properly rolled and covered up the first base line, a legitimate mascot wearing a horse outfit who is called Stanley the Stallion and out in left field foul territory they have used creative chain link fencing and promotional banners to rig some pretty solid bullpens. Oddly enough, there were no “bat boys” for either team, perhaps because local schools were still in session? There is a corny PA announcer, as required at all minor league (and lower ranks like the PGBL) ballparks. They seem to go the same broadcasting schools as the announcer guys who work inside strip clubs.

The sun finally sets and the isolation tank takes on an Edward Hopper-eqsue dimness because there are no lights inside the upper grandstand. That means fewer mosquitoes and moths, both species of which were assembling for mass weddings under the Cantine floodlights just up the foul lines.

They might notice the Stallions and Trail Blazers are playing some bad baseball. Runners stranded left and right, with decent pitching from both starters. Saugerties went with lefthander Anthony Rocco out of Pace University. He’s from Jackson, NJ, and he’s got a simple, minimum-arm strain delivery and the poise that comes with attending a college crammed onto a Brooklyn Bridge entrance ramp.

Adirondack had a nascent Division I hurler take the hill at Cantine. Mitchell Boyer, a righthander out of Batavia, IL, heading into his freshman season at Creighton University in Omaha, NE, the school that gave MLB a Hall of Fame bad ass named Bob Gibson. It was Boyer’s wild pitch that allowed Saugerties to plate the only run through the first six innings. I decided to exit the tank for a few innings to stand behind some lads from the Adirondack squad sitting outside the small dugouts on upended plaster buckets. Leading the chatter was Trail Blazers pitcher Pat Geraghty, who just nights before had earned Adirondack’s first victory of the season. Geraghty is a Morristown, NJ native playing his Division II college ball at Chestnut Hill College in Philadelphia. He doesn’t like the Saugerties catcher, nicknamed “The Sniper” by the PA announcer. The Sniper is Andy Karlan, a kid from Larchmont with an expensive haircut and an ID card from a community college in Palm Beach, Fla. Geraghty evidently has baseball Asperger’s Syndrome. His running commentary was loud and for all to hear. “That wasn’t a very good 3-1 swing,” he says as a Stallions player breaks his bat on a dribbler to the second baseman. Geraghty can’t believe The Sniper is wearing his sunglasses backwards beneath his catcher’s helmet, Guy Fieri style. Next to him on more upended buckets is back-up infielder Chris Collins of Hamilton College keeping the scorebook and fellow bench player Mitchell Schneider of Bowling Green State University charting pitches. This is Adrirondack skipper Ben Julian’s public paperwork crew, apparently. They keep yelling back at the corny PA guy, who leaves his microphone open and bleeding feedback during at-bats. Standing among them and in the hole was a bespectacled D-I player Matt Hosman, the Trail Blazers left fielder out of UMass. He seems to rise above Geraghty’s base chatter. As a group they all complained of stinging hunger, longing for burgers. Acting as straight man to Geraghty’s right is Dylan Borawski, a teammate from Chestnut Hill also along for the ride an Adirondack hurler. He would later tie the game with a two-out pinch-hit single in the top of the ninth.

Just like college baseball games, the Saugerties and Adirondack players spend very little time in the dugout, even when their team is batting. The conclusion of each inning has the defense greeted by a dutiful Lutheran communion line of teammates streaming forth toward the foul lines offering congratulations on another completed half-frame, even if it was a disastrous display.
Undersized Adrirondack shortstop Nick Bernick, a finance major at Niagara University and a Pittsburgh native (who wears jersey number 21 of course), kept distributing Reese’s Pieces as good luck charms for each teammate. They failed in the middle innings but seemed to work in the ninth when the Trail Blazers manufactured the tying run when Borawski delivered against Saugerties reliever Mike Davis, one of four Quinnipiac Bobcats on the home squad. Davis brought his college ERA of 18.41 to the hill, and though he passed the eyeball test for lanky closer types, he could not protect the slim Stallions lead.

The Reese’s Pieces good luck melted for Adirondack in the bottom of the ninth when the Stallions won 2-1 with a ringing walk-off double by Adam Chase. It was the hardest hit ball of the night, a gapper that scored Adam Thrower, a Canadian out of the University of Buffalo who had drawn a walk and legged it all the way home where he was mobbed by bobbing lads in home whites. The win put the Stallions at 3-0 for the young season, with plenty of home-and-home type scheduling against the Albany Dutchmen coming up. For the Trail Blazers, it was back on the bus for a game in Utica the next night.