But Boston’s pitching stinks, and more stats around the league. 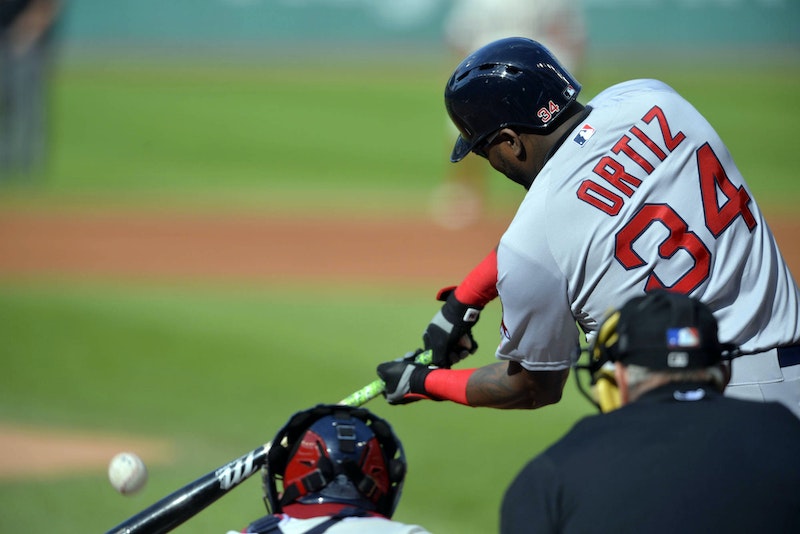 Red Sox Drawing Blood From Opposing Pitchers: From the why-is-he-retiring Big Papi, to the where-was-he-hiding Travis Shaw to the is-this-who-he-is Jackie Bradley Jr., the Boston Red Sox lineup is/was doing serious damage to opponents. Meanwhile, the Atlanta Braves and Philadelphia Phillies have done more damage to their own fan bases. The Braves and Phillies have combined to outscore Boston by only 28 runs, 364-336. Boston has nearly doubled the amount of Phillies doubles, 148-76. The Red Sox have compiled a team OPS (.847) that would rank 53rd on the individual MLB player leaderboard in OPS. The entire team, on average, would be the 53rd best hitter in the majors. And we haven't hit summer yet in the northeast.

Let's not discuss Boston's 4.35 team ERA (21st). Yes, they will be trading for pitching help, even if that means three relievers. Expect many pitching changes during AL East games starting in July. We may be seeing the beginning of an ugly new trend: the four-inning start.

Duffy Disaster Away From Home: The Giants’ Matt Duffy has bi-polar batting average splits. Duffy's home slash line: .353/.417/.461. Duffy on the road: .135/.198/.209. For a hitter who hits in a pitcher's park, Duffy's splits are especially bizarre. These numbers are almost entirely based on his BABIP (batting average on balls in play). Incredibly, those splits are .394 home and .133 away. It's as if teams only know how to shift on him away from AT&T Park.

Robert Duvall's Son: Sadly, Adam Duvall is not related to the great actor Robert Duvall. Journeyman Adam Duvall is in his age 27 season, the magical age when hitters often see a power spike. The Reds’ Duvall is hitting in the tiny bandbox known as Great American Ballpark in Cincinnati. Duvall has 17 homers, and a mere 19 singles. This has to be close to a record ratio. He also has 58 strikeouts and only one walks. Basically, he's the new Mark Reynolds (swinging from the heels).

Story of the Whiff: The Rockies’ Trevor Story has Duvall beat in the whiff category, with 84. Story is on pace for 239 strikeouts, to go with 45 homers, though he's only hit nine homers since his monstrous seven-in-first-six-game start. The record for batter's strikeouts in a season is 224, held by Reynolds himself.

Big Fly Leaderboard: Yes, the term "Big Fly" is kind of goofy, but there are only so many synonyms for the homer. Speaking of baseballs leaving the yard, the home run leaders as of June 8 contain more "all or nothing" hitters than I can remember seeing atop the ranks in years. Of the top 18 (six are tied at 13th on the list with 14 homers) four players have single digit walks. More than one-third of the way through the season, Adam Duvall (17 HRs, seven walks), Carlos Beltran (15 HRs, nine walks), Matt Kemp (14 HRs, four walks), and Khris Davis (the Oakland outfielder, 14 HRs, six walks) have all let go of any inhibitions when it comes to strike zone discipline. The lure of the big fly has won. Why does this matter? The all or nothing approach doesn't tend to work out well over time. For Duvall, he's reaping the rewards of a late-career opportunity in a hitter's paradise. For Beltran, he's swinging for one more contract before his playing days are over. Kemp, who has three more years on the 80-year contract he signed with the Dodgers in 2012, is desperately trying to re-establish himself in San Diego. For Davis, he's made a positive first impression in his first two months in Oakland. All four are motivated to let the bat fly. It's a wonder they see any strikes.

Who Stole All the Stolen Bases?: In 2015, only five players stole 35 or more bases. The year before, 2014, seven surpassed 35. Going back to 2013, 11 runners reached 35. The stolen base is endangered. After nearly 60 games, four players (Jonathan Villar, Starling Marte, Jose Altuve, and Billy Hamilton) are on pace to swipe 35. Altuve, Mookie Betts and Mike Trout are the only players in the game with hopes of putting together a 30-30 season.

Poor Wily: Milwaukee's Wily Peralta has the league's worst ERA (among qualified pitchers) with 6.79. Worse, Peralta's WHIP is 1.93. Only Baltimore's Ubaldo (No, You Baldo!) is close, at 1.89 walks and hits per inning. Unlike Baltimore, Milwaukee has no real hope at making the postseason this year. Peralta may as well be actually eating the innings, with a knife and fork. Things can change quickly in a major league pitcher's career. Less than two years ago, Peralta was finishing his age 25 season with a 3.53 ERA, having kept his walks down and his strikeouts up. This year, Wily's wheels have fallen off.