Most college sports programs cost their schools millions of dollars. 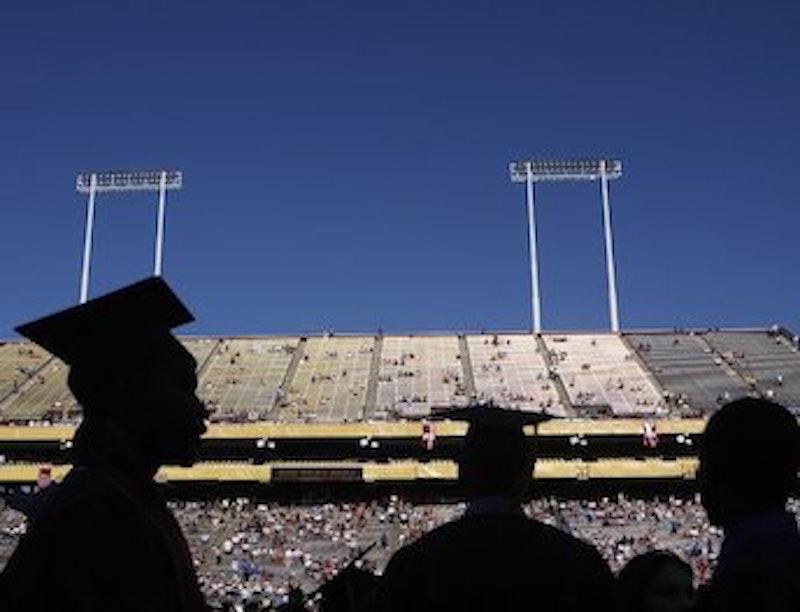 While it’s true that the top football programs in the country make money for their schools, the victim of the NCAA sports scam in most cases isn’t the athlete. Rather, it’s everyone attending the school burdened by the cost of these unprofitable programs driving up student debt.

In reality, most college sports programs cost their schools money—millions of dollars. According to the NCAA's official data from 2016, the average Div. 1 school lost about $12.6 million per year on athletics. Meanwhile, Div. 1 FBS programs lost an average of

$14.4 million while only about half of the football and men’s basketball programs typically bring in more money than they spend as the rest of the school’s teams lose money, according to ESPNW.

Most of the country’s athletic programs aren’t recouping their costs through ticket sales, which are non-existent for the majority of college sports teams. Instead, the cost is spread out between all of the students attending the university.

In the case of a Div. 3 college—which averages 2750 students—the cost of athletics comes to about $581 per student per year without football and $1127 if there is a football team. Multiply that by four (since they’re normally not receiving funds from boosters) and that's an additional $2324 to $4508 worth of costs because of these programs.

Some schools will advertise these fees upfront, and they can be insane. A 2010 Washington Post report showed that nine public universities in Virginia charged students more than $1000 apiece per year in athletic fees. Public colleges, like other government-run programs, are supposed to serve the best interest of their citizens. In this case, that would entail being a more affordable alternative to a private university to minimize student debt. This is possible because the schools are partially subsidized by the taxpayer. However, they don’t have an efficient system in place. They’re making the taxpayers and students pay into a system which funds something which has nothing to do with the intended purpose. Instead, that state-of-the-art basketball court is making the students and taxpayers poorer.

This is also the case when colleges have taxpayer-funded stadiums built for their athletic programs. People with an interest in economics know this is a terrible corporatist ploy, but the lie of economic growth and prosperity continues to be sold in a number of communities.

When I attended Emerson College in Boston, a Div. 3 school without a football program, the college had a new gymnasium, a former NBA player as the men's basketball coach and both the baseball and softball teams took week-long trips to Florida to play games at the start of their seasons. How that was good for the student body is unclear, nor is how much money went to all of this because the school never specifically listed an activities or athletics fee. However, what is clear is the school wasn't making any money off these lavish expenses and someone had to pay the bill.

It's also true that the current student debt crisis is out of control and measures to cut costs have to come from somewhere. Americans currently hold more than $1.5 trillion in student debt and the average class of 2016 college grad had $37,172 in debt when they graduated, according to Forbes. There's a lot of pragmatic steps that could be taken to lower future costs for students such as eliminating general education requirements, cutting administrative staff sizes, digitizing textbooks, reforming the student loan system, creating more opportunities for high school students to earn credits once they've passed their statewide tests and met most of their high school class requirements, and so on.

Taking a serious look at college athletics and weighing the upside and downside for the entire student body is one small step which could save students thousands of dollars. Some students might like having teams on their campus, but others would likely rather save the money.

I had the opportunity to play college football at either the NCAA Div. 3 level or the NAIA level but ultimately went in a different direction—to a hipster school in Boston to be a token straight white guy.

Although I enjoy sports, playing one in college didn’t appeal to me, nor did attending games on campus as a commuter student. For others, it’s a part of the school’s culture and they don’t mind funding all sorts of teams. Others would rather keep their money.