Why Gender Discourse Is a Distraction

The notion of some inner psychological third sex was questioned by the very homosexuals and transexuals it was intending to legitimize. 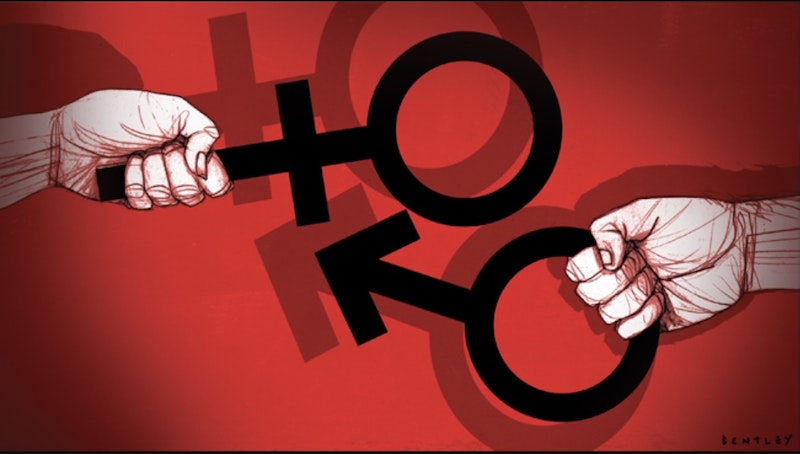 From trans activism to critiques of toxic masculinity, the Western world is going through a “gender moment.” The American Psychological Association defines “gender” as the psychological, behavioral, social, and cultural aspects of being male or female. It’s used to distinguish these social-symbolic components of masculinity and femininity from the raw biology of genitals, chromosomes and hormones. “Gender” however has a history, one that should give us pause as to its conceptual usefulness.

Until the 1960s, the word “gender” was reserved for distinguishing grammatical categories, such as the masculine and feminine forms in French. It wasn’t until American psychologist Robert Stoller and New Zealand sexologist John Money began to utilize the term in their treatment of “transexuals” and intersex patients that the word took on its current meaning of psychological habits free from sexual anatomy.

Money was particularly influential in his description of “gender identity”—a view that one’s sense of being male or female initially begins in a highly flexible state but is “locked in” at around three years old, determining a person’s life course. This notion of gender identity has proven influential for trans people seeking to understand their feelings and experiences, with modern trans medicine generally tracing this identity to some inner biological cause.

However, the work of Stoller and Money was also influential on second wave feminist movements who took the notion of gender to mean “socialized sex” free from biological destiny. This is how “gender” now appears both as a foundational concept for trans identity, but also a common point of objection from trans exclusionary radical feminists.

A quest to find the underlying cause of sexual deviancy has been at the heart of the discipline of sexology since its inception. Magnus Hirschfeld, the father of modern sexology, was also one of the first advocates for gay and trans rights, which he championed by looking for an underlying biological cause for their difference. Hirschfeld argued that both homosexuality and transsexuality was indicative of an innate “third sex”—a natural variation in the human species, and therefore deserving of fundamental human rights. This is reflected up until today, with modern LGBT activism relying on the trope that gay and trans people are “born this way.”

But even in Hirschfeld’s time, the notion of some inner psychological third sex was questioned by the very homosexuals and transexuals it was intending to legitimize. The homosexual sociologist Benedict Friedländer, wrote in the gay journal Der Eigene:

[For Hirschfeld to be correct] in ancient Hellas in particular most of the generals, artists and thinkers would have to have been hermaphrodites. Every people from whose initiative in all higher human endeavours every later European culture fed must have consisted in great part of sick, hybrid individuals.

Historians of sexuality such as French philosopher Michel Foucault have similarly failed to see evidence of a distinct and consistent “third sex” in the historical record. That is, until there was an impetuous to explain and rationalize sexual deviancy in the late-19th century, both the “homosexual” and “transexual” were not clearly defined categories of humanity.

This poses a problem for modern gender politics. The more we try to pin down what “gender” is, the more it slips through our fingers—with a wide variety of aesthetic styles, personalities and dispositions assumed to distinguish males and females throughout history and across cultures.

When presented with this historicist critique, some trans people will attempt to ground their identity not in “gender” but bodily discomfort—an urging to change one’s sex. But a distinct “bodily discomfort in one’s sex” isn’t reflected consistently throughout history either.

This approach, which relies heavily on a biomedical model of trans experience, also excludes those trans people who don’t define themselves by bodily disgust but rather a “euphoria” or the pleasure of transversing sexual anatomy. Some feminists argue that we should do away with social expectations based on sex altogether (what is sometimes called “gender abolitionist” position). Feminist scholar Catharine MacKinnon rightly notes that what we call “masculine” and “feminine” appear to reflect a sadomasochistic arrangement of dominance and passivity.

But this feminist argument hasn’t been widely accepted, likely because the courtly dance of the masculine and feminine isn’t necessarily one of master and slave, but a kind of pleasurable symbolic exchange between the sexes. One thinks of the revolt of French feminists to what was perceived as the “excesses” of the American #MeToo movement in 2018. Much modern anti-feminist rhetoric is less an apology for male violence and more a call to preserve the masculine and feminine dynamics of heterosexuality.

Understanding all of this without recourse to the problematic concept of “gender” requires adopting a theoretical frame that hasn’t taken off in Anglo-America, the view of Lacanian psychoanalysis. Jacques Lacan was a French psychoanalyst and psychiatrist active in the early-20th century, who sought to extend the revelations by Freud that much of our motivations are outside our conscious awareness, by adopting the insight that we are “speaking beings” who are structured like a language.

For Lacan (and Freud), our narcissistic “self-insight” should be treated with profound skepticism as we’re merely the result of unconscious dynamics—family psychodramas and the logics of language. This throws out the Stoller and Money understanding of “gender identity” which relies on the testimony of the Ego. Subjectivity in Lacanian psychoanalysis is generated as a result of a feeling a “lack” brought about bythe psychic separation from our mothers. We try (and repeatedly fail) to fill this “lack” through imaginary identifications and thwarted desires structured by language.

The “masculine” and “feminine” for Lacan are not the frilly dresses and macho bravados we see reflected in the concept of “gender” but our relationship to pleasure. A masculine desire to fetishistically possess or control and a feminine desire is to be overwhelmed. This sexual difference isn’t necessarily tied to biology and a male can occupy a feminine position just as readily as a female a masculine position. However, this perspective explains why the masculine/feminine economy continues despite feminist calls for its abolition, it’s a means to pleasure. None of this seems to reflect the modern trans experience; if it did trans subjectivity would simply be a sadomasochistic identification.

Patricia Gherovici, a Lacanian psychoanalyst, has sought to understand the trans experience without recourse to “gender” as a result of what is called “The Real” or the point at which language falters in the structuring of our subjectivity. The unconscious is not male or female, but we desire the socio-symbolic of what it means to be male or female in our current cultural or historical period through a creative (but not conscious) decision to internalize and embody this sexual difference.

For Gherovici, the trans experience occurs when our bodies reject the socio-symbolic on offer, something that is a distressing encounter. She writes in Transgender Psychoanalysis: A Lacanian Perspective on Sexual Difference:

Some [of my patients] report that they have a peculiar experience of their body, a body that can fall from one’s self, like a wrapping that does not fully hold.

But this is not a unique experience merely for the trans subject. In fact, for Lacan this point at which language faltersis the “noble bastardry” which gives rise to our individuality.

The world’s most famous Lacanian, Slavoj Žižek, has been called “transphobic” for calling trans identification a choice, but he’s describing this noble bastardy at the heart of the speaking body:

[P]sychic sexual identity is a choice, not a biological fact, but it is not a conscious choice that the subject can playfully repeat and transform. It is an unconscious choice which precedes subjective constitution and which is, as such, formative of subjectivity, which means that the change of this choice entails the radical transformation of the bearer of the choice.

This is the heroic, yet unconscious, decision by the body that it is not entirely corruptible by the socio-symbolic of a given historical or cultural period. It’s the little girl throwing the Barbie across the room, it’s two men relenting to their lust for one another and it’s the desire of trans people to make art out of their body in transition. To respect this decision doesn’t require an appeal to an innate gender identity or even to a distinction between sex and gender, it simply requires an acknowledgement that we’re all negotiating our place in the world.

We should be free to pursue the pleasures of our bodies, regardless of whether these desires correspond to expectations based on sex.