Was Jane Austen a Lesbian? 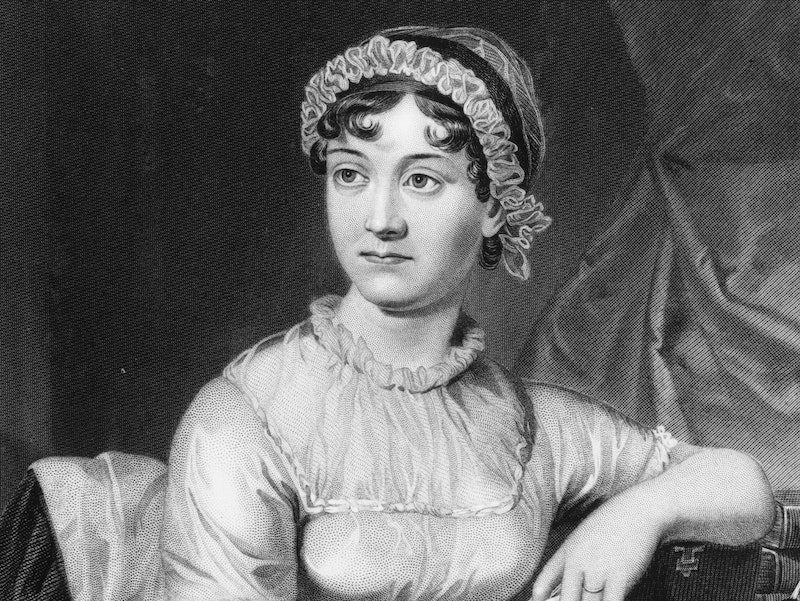 It's a provocative question, and one that’s provoked much scholarly comment, cogitation, and outrage over the last decades.  As far back as 1945, Edmund Wilson argued that the protagonist of Emma, with her passion for female friendship, was a lesbian, and hinted at the possible meaning for the author's sexuality. In 1995, Terry Castle commented on Austen's intense relationship with her sister, leading Austen scholars to vehemently reject the possibility of lesbian incest. "I think it's about as likely Jane Austen was gay as that she was found out to be a man," Austen biographer Claire Tomalin sniffed. After historian Lucy Worsley noted earlier this year that Austen was more likely to have had sex with a woman than with a man, many newspapers ran with "Austen was a lesbian" headlines. To which Danuta Kean at the Guardian, responded, "Jane Austen's lesbianism is as fictional as Pride and Prejudice."

Pride and Prejudice is very fictional. We know for a fact that there was no Elizabeth, no Darcy, and no Pemberley. On the other hand, we know very little about Austen's sexual life. Why then, are we so sure she never had sex with a woman or even had sexual feelings for a woman? What is the basis for the enthusiastic negation?

Kean offers two arguments. First, she says, "for 18th-century middle-class ‘spinsters’ like Austen, the sexual freedom enjoyed by single women at either end of the social scale—be they aristocrats or paupers—were off limits." Second, Kean argues that people in Austen's time did not have a contemporary understanding of homosexuality or lesbianism, and that, therefore, it is anachronistic to refer to Austen as a lesbian.

Both of these claims are a lot less certain than Kean makes them out to be. It's true that middle-class single women had little sexual autonomy. But "little" doesn't necessarily mean "none." Mary Wollstonecraft, for example, wrote warnings about the possibility of vice when girls go away to study.

Austen went to boarding school briefly, when she was 10. Still, women did sometimes visit each other for extended periods—as they do in Austen's novels. Austen didn’t travel much, but there are periods in her biography that are opaque due to the destruction of her letters by her sister. The idea that Austen's life was so thoroughly restricted that she could never have possibly had any opportunity to have sex with women, or men, envisions a grimly totalitarian early-19th century.

Women's options were very circumscribed, but Big Brother wasn't with them every moment.

The argument that Austen couldn’t have been a lesbian because homosexuality didn’t exist as we know it in the early 1800s is also overstated. If Mary Wollstonecraft was warning obliquely about lesbian sex among girls, it’s likely that people at the time knew about lesbian sex among girls. Denis Diderot's The Nun, which discusses lesbian sex (in very negative terms) was published in 1796, and was read by many educated people in England. In 1810, a Scottish schoolgirl accused two of her female teachers of having an affair, which resulted in a notorious trial.

Moreover, there were visible lesbians in Austen's time. Anne Lister, a Halifax gentlewoman, was well enough known as a lesbian that she was sometimes ridiculed, and referred to as "Gentleman Jack." She had numerous affairs with women—which is to say, she was not the only lesbian in England. Lister even entered into a marriage agreement with an heiress, Ann Walker—an agreement that required the involvement of lawyers, and so was hardly secret.

None of this means that Austen was a lesbian. We know that she had a couple of brief romantic flirtations with men, and a proposal of marriage from a man, which she accepted and then rejected less than 24 hours later. There’s no evidence that she had a sexual relationship with a woman—but we don't know that she didn't, either. It's true that the understanding of lesbianism as an identity was not as developed in Austen's day. But women of her class certainly knew, or could know, about the possibility of same-sex relationships, and some women of her time and station had crushes on, romantic thoughts about, and sex with other women. "It is incorrect to think that there were not women sexually involved with other women in Jane Austen's time and in her class," Sharon Marcus, author of Between Women: Friendship, Desire, and Marriage in Victorian England, told me. "And therefore it's absurd to say that it's impossible that a woman like Jane Austen would have been a lesbian."

The controversy over Austen's lesbianism, Marcus suggested, may tell us more about our own preconceptions about sexuality than it does about whom Austen did or didn’t have sex with. Some commentators are eager to deny that Austen could’ve been a lesbian, as if lesbianism is a modern and disreputable invention. Other critics find it hard to believe that a single woman would refuse to marry unless she was gay.

The truth is, we know little about Austen's sexuality, and little about her sexual desires. The only thing we can say is that human beings are various creatures, and their sexual interests, desires, and practices are equally diverse. In the absence of certain evidence, there's no reason to think that Jane Austen, one of the most inventive people to walk the earth, fits into anyone's preconceptions.